Renowned physicist Stephen Hawking died early on Wednesday, his family said. He was 76. The professor died peacefully in his sleep at his home in Cambridge…..reports Asian Lite News

Nobel Prize-winning physicist Professor Stephen Hawking, who shaped modern cosmology and inspired millions despite suffering from a life-threatening condition, died on Wednesday. He was 76.

His family released a statement in the early hours of Wednesday confirming his death at his home in Cambridge, The Guardian reported.

“We are deeply saddened that our beloved father passed away today. He was a great scientist and an extraordinary man whose work and legacy will live on for many years,” Hawking’s children said in a statement.

“His courage and persistence with his brilliance and humour inspired people across the world. He once said, aIt would not be much of a universe if it wasn’t home to the people you love.’ We will miss him for ever,” the statement added.

Hawking is survived by three children — Robert, Lucy and Timothy — from his first marriage to Jane Wilde, and three grandchildren. 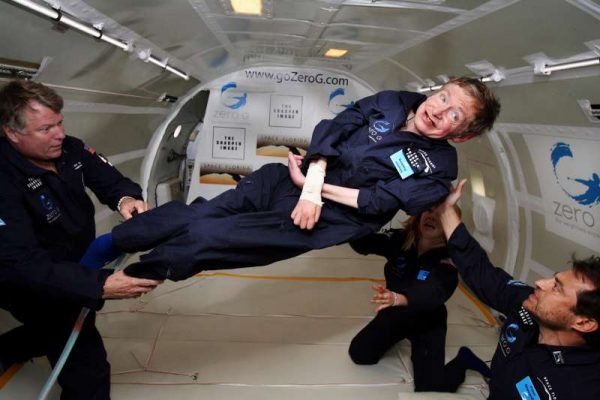 Known the world over for his acclaimed book “A Brief History of Time: From the Big Bang to Black Holes”, Hawking was diagnosed with amyotrophic lateral sclerosis (ALS) — a progressive neuro-degenerative disease — in 1963 at age 21.

Hawking’s doctors gave him nearly two years to live but he defied the medical history and survived for decades.

For the rest of his life, the physicist used a wheelchair to move around and a speech synthesizer that allowed him to speak in a computerised voice with an American accent.

For Hawking, the early diagnosis of his terminal disease ignited a fresh sense of purpose.

“Although there was a cloud hanging over my future, I found, to my surprise, that I was enjoying life in the present more than before. I began to make progress with my research,” he once said.

“My goal is simple. It is a complete understanding of the universe, why it is as it is and why it exists at all,” Hawking added.

With fellow physicist Roger Penrose, Hawking merged Einstein’s theory of relativity with quantum theory, suggesting that space and time would begin with Big Bang and end in black holes.

In 1974, Hawking proposed what is known as his most significant theory that black holes can emit sub-atomic particles.

Published for the first time in 1988, “A Brief History of Time” stayed on the Sunday Times bestsellers list for an unprecedented 237 weeks. It sold 10 million copies and was translated into 40 different languages.

Shocked Hawking fans took to Twitter to mourn his death.

“Stephen Hawking, confined to a wheel chair, had thoughts flicker in his brain that changed the world more than entire generations of modern politicians. With some luck, with his passing will come some perspective as well as appreciation,” wrote David Rothkopf.

Actor Eddie Redmayne’s portrayal of Hawking in the film won him an Oscar for Best Actor.