Mr Sitaram Yechury, General Secretary of India’s largest Communist party, will address Association of Indian Communists of Great Britain (AIC) on Saturday March 31, 2018.
The event will take place at the Britannia Country House Hotel, Palatine Road, Didsbury, Manchester, M20 2WG from 12:30. Yechury, one of the most popular Communiust leaders from South India, will address the cadres and general public to brief the party stance on various issues. The meeting is relevant to the secular front formation in India as the Communist Party of India (Marxist) holding their 22nd Party Congress at Hyderabad on April 18-22.

A recent statement from the CPM said all the latest data coming in show that the economic slowdown in India has accelerated after demonetisation and the threat of recession is looming ahead.

“The estimated GDP growth in the first quarter of the current financial year is 5.7 per cent. The GDP growth rate has fallen four quarters in a row,” it added. “The index of industrial production for this quarter shows a growth rate of only 1.8 per cent. Exports are stagnant; and the non-performing assets of nationalised banks has increased to ₹8.26 lakh crore at the end of June 2017 (without adding interest),” it said. 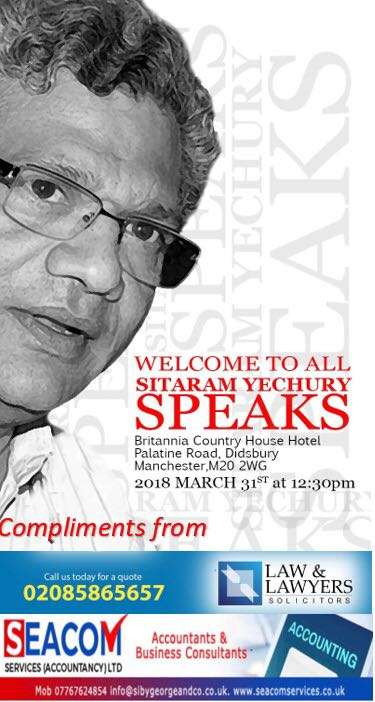 It also noted that the agrarian distress continues to deepen. “Unemployment is soaring across all sectors of the economy and the latest data in the services sector show a contraction of economic activity. The Modi government’s economic policies are proving to be disastrous for the country,” it added.
Mr Yechury alleged that the traits of crony capitalism have increased manifold in the country during the tenure of Narendra Modi government at the Centre, as compared to the previous Congress regime.

Citing various examples of the Centre’s policy reforms, he claimed that such policy changes were designed to favour a certain section of capitalists and businessmen in the country while completely overlooking the interest of the masses.

“Aspects of crony capitalism were present during the time of the previous central government run by Congress, but in four years of Modi government, the traits of such practices have multiplied manifold,” Yechury said while speaking at a seminar here on “Crony capitalism and its dangers to the nation”.

“After the Modi government’s ascendancy, it has applied the traits of crony capitalism in a very dangerous way. On one hand the banks are getting looted in the name of non-performing assets (NPA) and non-repayment of hefty loan amounts, while on the either hand, the government has revoked loan worth nearly two to three lakh crore rupees during its tenure,” he alleged. 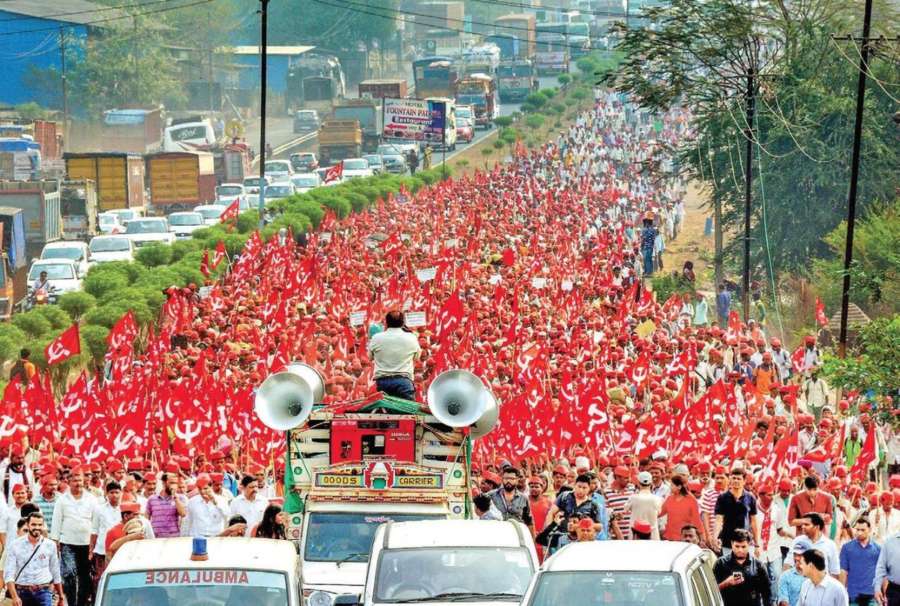 Yechury alleged that while the government could not revoke the loans of farmers to save them from committing suicide citing lack of fund issues, it revoked loans taken by the capitalists worth crores of rupees.

“The government kept mum about the names of the capitalists whose loans were revoked. But it won’t be a secret for long. A loan defaulter like Nirav Modi was seen with the Prime Minister in Davos in spite of FIR being filed against him. How was he allowed? It cannot be that he was spared by the customs due to the similarity of his surname with the Prime Minister,” the Left leader said.

He also questioned why the names of the industrialists, who travelled with the Prime Minister during his foreign trips, were still kept a secret, and accused Modi of working as the middleman in many deals signed between foreign companies and some Indian industrialists close to him.

“They often proudly say that unlike the previous government, this government does not have any middleman. I say there is no middleman because the Prime Minister himself works as the middleman. The industrialists sign significant deals with the foreign companies in presence of the Prime Minister. They directly sign those contracts and earn crores of rupees as profit,” Yechury claimed.

Stating that a loot was going on in the country, he criticised the electoral bonds introduced by the government, saying it would open up a huge scope for people to open fictitious companies and turn their black money into white.

He also pitched for introducing a corporate fund for democracy instead, where the donation would go to a state-managed or Election Commission-managed fund, which would in turn be utilised through a system of state financing of elections.

Yechury said that farmers can “uproot governments at the Centre and in states.”

“Any party which ignores the cause of farmers will not survive. Last year, for the first time in the country, Maharashtra farmers had gone on ‘strike’ which resulted in the announcement of a farm loan waiver package. But after 10 months, it remains unimplemented,” Yechury said.

Drawing parallels with the historic Dandi Yatra, he said that on (March 12) on this day 88 years ago, Mahatma Gandhi succeeded in shaking the very foundation of the British Empire which culminated in freedom for India.

He pointed out how the huge loans of industrialists and businessmen were being written off and how people like Lalit Modi, Vijay Mallya and Nirava Modi cheated banks and escaped the country with impunity.

“For writing off the entire debt burden of the farmers, the government needs barely Rs 1 lakh crore, which they don’t have. But much more has been lost by banks and they are busy writing off loans by the big corporates,” Yechury said.
Secular front 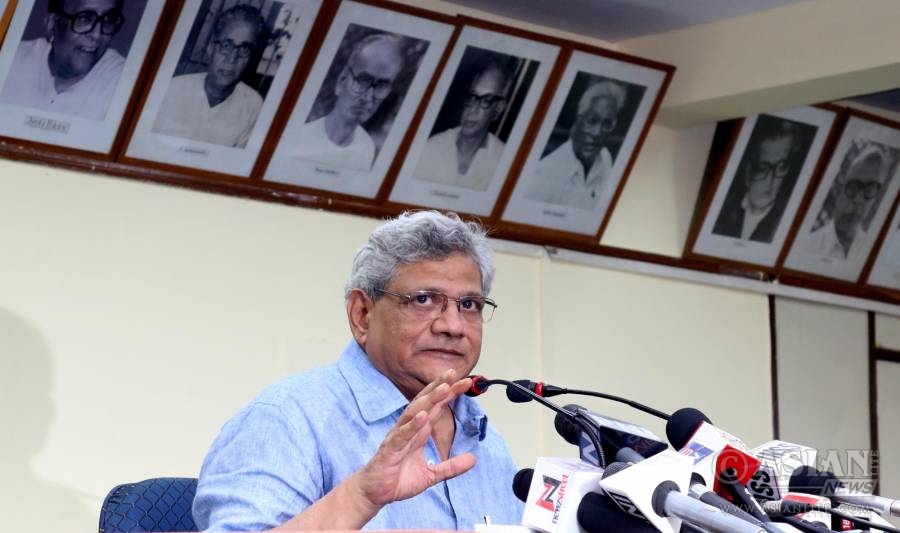 The Left leader said that this time the opposition alliance would be on the strength of “niti” (policy) and not on the basis of “neta” (leader).

“After the BJP won the Tripura assembly elections, their cadres unleashed a reign of terror over the past one week across the state to turn Tripura “birodhimukt” as part of their larger plan of “opposition-free India,” said Mr Yechury. The Left leader refused to accept that the Bharatiya Janata Party (BJP) was on the rise in India as, according to him, the saffron party lost many elections in the BJP-ruled states.

Mr Yechury, accompanied by former Chief Minister Manik Sarkar and other party leaders and MPs, visited many post-poll violence-hit areas of Tripura and spoke to those affected by the incidents.

“The BJP can destroy the party offices, attack people and their assets, but they cannot annihilate an ideology. The CPI-M might win or lose the elections, but it would continue to be the champion of people’s cause.”

He claimed that a huge number of CPI-M and other Left parties’ offices were set on fire, ransacked and vandalised; hundreds of houses, shops and other assets owned by Left leaders and supporters were either burnt down or destroyed by BJP members and thousands of people driven out from their homes and villages.

Yechury demanded an end to the violence in the state.

The CPI-M General Secretary urged the newly formed BJP government to give proper compensations to those affected — to bear the treatment cost of the hundreds of injured, provide security to the fear-stricken lot, and return of the hundreds of party offices forcibly occupied to their rightful owners.

He said the issue of violent incidents in Tripura would be raised in Parliament and the matter would be discussed with all opposition parties as well.

“The incidents of violence and related issues would be taken up with the Centre. In this hour of distress, Tripura would not remain alone… the entire country is with the people of the state,” the CPI-M leader said.