The runway at Gatwick Airport, the UK’s second busiest, reopened after more than 32 hours of complete shutdown due to drone sightings, affecting over 110,000 passengers during the busiest travel period of the year…reports Asian Lite News 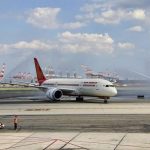 “Gatwick’s runway is currently available and a limited number of aircraft are scheduled for departure and arrival,” the airport.

According to Flight Radar 24, a Thomas Cook flight was the first to land at the airport after almost two days of chaos.

Gatwick Chief Operating Officer Chris Woodroofe said the police had not yet found the drone operator but a hunt was on. Police officials say an environmental activist might be behind the act, the BBC reported.

The police were considering shooting the drone down, a “tactical option” previously ruled out over concerns for stray bullets, the BBC reported. Sussex Police spokesman Jason Tingley said the force would “do what we can to take that drone out of the sky”.

Transport Secretary Chris Grayling said there was no evidence it was terror-related. But he called it a type of disruption “we’ve not seen before” and “lessons need to be learned”.

Gatwick had been closed since Wednesday 9 p.m. — barring a brief reprieve of 45 minutes early Thursday — after two drones were spotted near the airfield. A third drone was also sighted more than 24 hours later, leaving hundreds of flights grounded.

Thousands of passengers remained stranded at the airport overnight and on Friday morning as police investigations continued. About 120,000 people had been due to fly since the runway closed.

Passengers earlier complained of “freezing” temperatures in the south terminal, while others found themselves stuck abroad after inbound flights were either cancelled or diverted.

Dozens of passengers said uncertainty had led them to ditch their festive travel plans or spend extra money on new flights and hotel stays.

Budget airline Ryanair said it was switching all of its Gatwick flights to operate in and out of Stansted airport on Friday. Easyjet said it would resume services but expected departures and landings to be restricted at first.

Gatwick, located some 43 kilometre south of London, is one of Europe’s main transport hubs, serving more than 32 million passengers a year.