For the very first time, a film depicting the life and work of the founder of the internationally renowned Hare Krishna movement has released in cinemas across the UK. Hare Krishna! The Mantra, The Movement, and the Swami who started it all premiered at the Odeon Covent Garden. 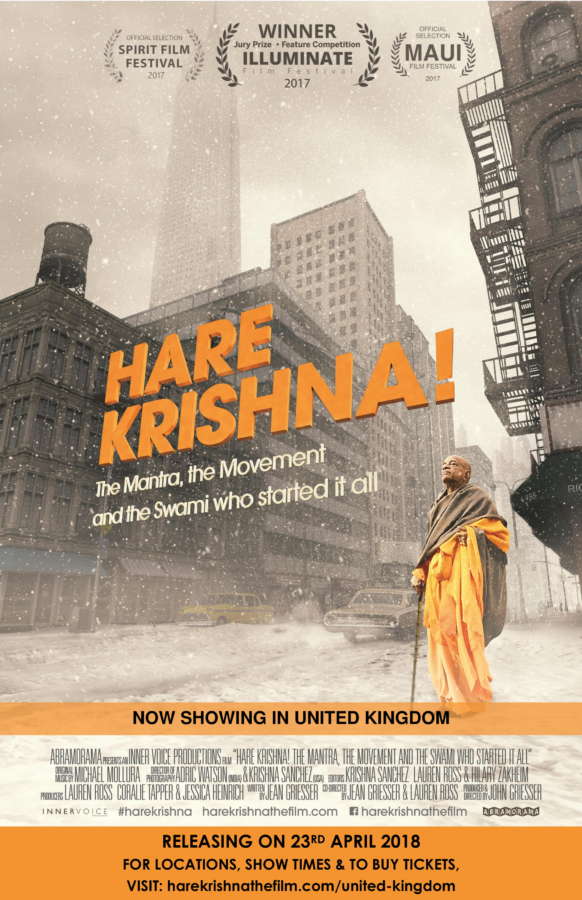 Never before has there been a bigger opportunity for a mainstream audience in the UK to experience the incredible story of A.C Bhaktivedanta Swami (affectionately known as Srila Prabhupada), the 70-year-old Swami from India, who arrived in America without any support or money in the turbulent 1960s. Despite all difficulties and obstacles, his unflinching determination and faith ignited a worldwide spiritual phenomenon, known as the Hare Krishna movement and officially named the International Society of Krishna Consciousness (ISKCON).

The internationally-acclaimed documentary film uses never-seen-before archival verite, Srila Prabhupada’s own recorded words, and interviews with scholars and his early followers, and takes the audience behind-the-scenes of a cultural movement born in the artistic and intellectual scene of New York’s Bowery, the hippie mecca of Haight Ashbury, and the Beatlemania of London, to find out more about the Swami who started a worldwide revolution in consciousness.

Speaking about the film, Radhanath Swami, a spiritual leader in the ISKCON movement, said:  “As a sociological, philosophical, or religious study, Srila Prabhupada’s life story stands tall as an exceptional contribution to the life of millions of people and to the world…The spellbound story of Prabhupada and his life will make the audience wonder how the world has largely missed this saint who so recently walked among us”.

Directed by John Griesser and co-directed by Jean Griesser and Lauren Ross, the film had its world premiere at Illuminate Film Festival in Sedona, Arizona in June 2017, which sold out in just 30 minutes and won the Grand Jury Prize for Best Film at the film festival. Since then, the film has had American-wide release in cinemas beginning in New York City where the opening weekend grossed $21,473 from one showing (the weekend’s highest per theatre average among all reporting releases in the USA) and in over 160 cities across the world so far.

Jai Nitai dasa, ISKCON-London Temple President said: “This is a great opportunity for the whole of the ISKCON UK community and of the movement, and those interested in specific aspects of ISKCON’s contributions to the world such as kirtan, meditation, vegetarianism and yoga, to attend, in addition to members of the public simply curious to find out more about the Hare Krishna’s. The film promises to be an uplifting spiritual experience, regardless of one’s beliefs or personal religion.

We have been waiting a long time to see Srila Prabhupada on the big screen and the opportunity for thousands of others to witness his courageous and compassionate story. Finally, the London Premiere has arrived!”

Mcklein Javeri, who is leading the organisation of the screenings in the UK said: “This is a momentous occasion to relive the birth of the Hare Krishna movement in the West and its enduring global growth over the past 50 years. UK audiences will be especially treated with archival conversations with The Beatles’ George Harrison and the London pioneers of the movement, in the knowledge that many of the showcased adventures took place right here! We hope that many come join the Hare Krishna community take on the big screen!”