Carwyn Jones really got into the spirit of Diwali celebrations in Cardiff and joined in with the dancers at the event, and even wore traditional Indian pots on his head for one of the dances.

The 51-year-old Labour politician took to the stage to join in with the dancers that had performed at the event to celebrate the high point of the Hindu spiritual year.

The event at the Wales Millennium Centre which was organised by Indian diplomat Raj Aggarwal was a sell out and there were over 300 people in attendance for the night of traditional Indian music and dancing.

Honorary Consul to India in Wales Raj Aggarwal said: “It was fantastic to see the First Minister getting involved in the dancing to celebrate Diwali, it was such an amazing event and everyone had a great night.”

During speeches at the event Honorary Consul for India Raj Aggarwal said that bi-lateral trade talks with India must start soon to enable stronger trade relations between the two countries post Brexit.

“There’s never been a better time to strike a trade deal with India. The Indian economy is booming and there is huge demand for quality goods manufactured in Wales. It is clear that Brexit is going to happen and whatever you standpoint on that, Wales must use this opportunity to strike deals overseas. 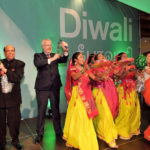 “There are clear advantage to trade with India – there is the shared business language, the historical association and also the links forged by the Indian diaspora who have settled and become prosperous in Wales.”

And he added: ”The government in India has already made trade easier and has cut down on the bureaucracy and red tape needed for Welsh companies to start to export there but now we need to encourage this trade by breaking down any barriers whether they be tariffs or import restrictions.

And he added: “We also need to have more movement with skilled workers and reduction of Visa restrictions especially for Indian students wanting to go to Welsh universities. They are a huge source of revenue for our universities and several stay on to provide the community and business with highly skilled workers.

“I’m sure I don’t need to remind people who many amazing Indian doctors and pharmacists we have in the Welsh NHS and the vast majority of those went to universities in Wales.” 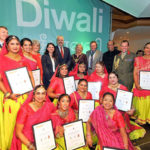 The Wales Millennium Centre was lit up for the event in the orange, white and green colours of the Indian Tirangaa flag, which also raised on a flag pole above the building. The event was attended by the First Minster of Wales Carwyn Jones, leader of Cardiff Council Huw Thomas, the Royal Navy’s Wales commander Brigadier Jock Fraser as well as several other local dignitaries.

The First Minister has been on two trade trips to India in the past organised by Raj Aggarwal and he has always supported growing stronger trade relationships with India. At the end of the event Raj Aggarwal presented the First Minister with a gift, a beautiful book all about traditional Indian block printed textiles.