Protests flared in Chennai on Tuesday as people demanding a Cauvery Management Board took to the streets against an IPL match to be played between Chennai Super Kings (CSK) and Kolkata Knight Riders (KKR) at night….reports Asian Lite News

Even as the rival teams made it to the M.A. Chidambaram Stadium – popularly known as Chepauk Stadium – through the back gate, the complex turned into a fortress with the deployment of hundreds of police personnel, many in riot gear.

All roads leading to the stadium also came under a blanket of security to prevent anti-IPL activists from spoiling the show. Groups of protesters kept moving towards the cricket stadium from various lanes shouting slogans.

A helicopter circled the sky over the stadium.

Police took into custody members of various Tamil groups. Many raised slogans against the Modi government for not constituting the Cauvery Management Board (CMB) and the Cauvery Water Regulatory Committee (CWRC) as mandated by the Supreme Court. 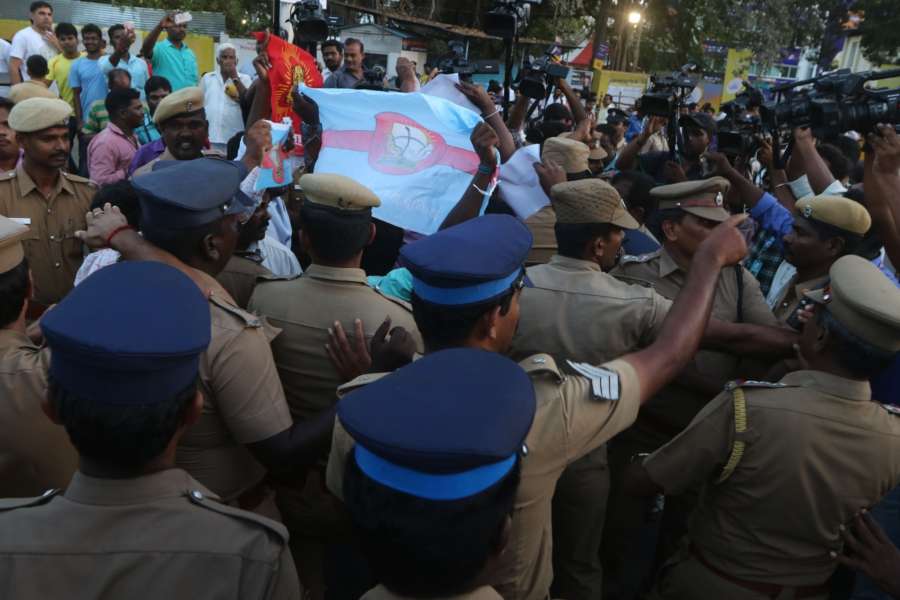 Protests on the arterial Anna Salai threw traffic out of gear.

With the match set to start at 8 p.m., some demonstrators released black balloons into the sky in a sign of protest. Also taken into custody were some protesters who tried to lay siege to the cricket stadium.

Tamil movie celebrities like Director Bharathirajaa also hit the streets demanding justice for Tamil Nadu vis-a-vis Karnataka, the two states which are locked in a dragging row over the river water.

Police have said all spectators will be frisked thoroughly before being let into the stadium.

The use of mobile phones, transistors, computers, cameras or any other audio visual recording equipment for recording and for communication the match details, statistics and images has also been prohibited.

On Tuesday, however, the IPL organisers decided to allow spectators to carry mobile phones into the stadium – when it became clear that a ban on mobile phone would keep people away from the complex.