French President Emmanuel Macron along with Prime Minister Narendra Modi co-hosted the first ISA summit at the Rashtrapati Bhawan, in the presence of the heads of 23 nations and 10 ministerial representatives….reports Asian Lite News 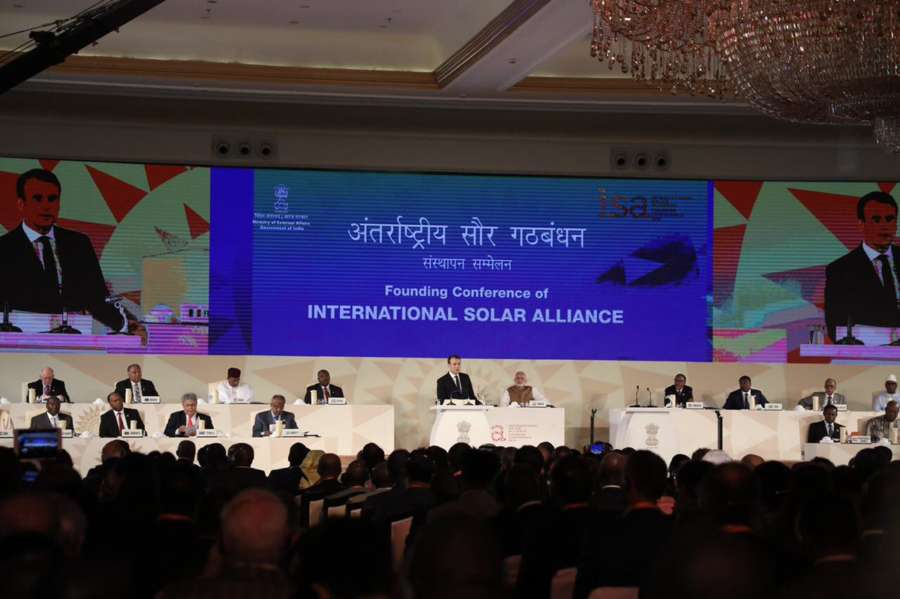 Announcing an additional 700 million euros investment for solar-energy, French President Emmanuel Macron, at the first International Solar Alliance (ISA) summit in New Delhi on Sunday, called for “joint duties” for a “planet that has to be shared”.

Macron along with Prime Minister Narendra Modi co-hosted the first ISA summit at the Rashtrapati Bhawan, in the presence of the heads of 23 nations and 10 ministerial representatives.

“In 2015, we said we will allocate some 300 million Euros to support projects in the member countries, these commitment by the France was met couple of months ago,” he said.

Backed and conceptualised by India, the ISA currently has 121 prospective member countries and territories. It was launched jointly by Modi and former French President Francois Hollande at the landmark 2015-Paris Climate Agreement.

Of the 121 member nations of ISA, 60 have signed the treaty and about 30 nations have ratified it.

Speaking at the summit, Macron said that while some (the US) decided just to leave the Paris Agreement, others decided to act because they wish good for their children and grand children.

“All of us her have experienced global warming, some of you here have lost your territories, economy and life of citizens,

“We should not forget that we only have one planet and we are sharing it and for that there is no alternatives. There is a joint destiny which means we also have some joint duties.

“Without concept of climate justice there would had been no Paris Agreement… We would have blamed each other and we would go nowhere,” he added.

The French President pointed out that while the countries between two tropics account for three-fourth of the world’s population with potential of 138 GW of solar power in next five years, however only 50 to 60 per cent people have access to electricity.

Macron said it was needed to identify the projects in every single country.

“Each country with its solar energy potential will identify here there needs and how much finance they need. A 100 projects have already being listed here by 36 member countries,” he said, further calling the member states to invest, adding, “these projects are very profitable”.

Under ISA, 100 centre for excellence across the alliance members will train 10,000 technicians to achieve the targets.

He said that ISA shall help small enterprises in the small countries to help them mobilize all the projects and that emergent need is to mobilize the available finance.

“But in order to reach 1000 billion USD by 2030, to reach One TW (1,000 GW) solar energy, we need private investors. The alliance will provide favorable framework,” he said, adding that expensive existing guarantee mechanism, that assures private investors, are being reviewed by France, India, World Bank and other member states.

The French President also stressed on the affordable low cost solar solutions, adding “alliance should be a place where technology can meet the expectations of people and country”.

He further lauded India for its solar mission.

India, with 20 GW installed solar capacity has one of the fastest growing solar mission in world, about eight times increased over past four years. India’s wind power generation capacity is 32.8 GW.