Why has Pakistan faltered? Mr Tariq Khosa, who headed the Federal Investigation Agency (FIA), explores in his new book The Faltering state…. A review by Dr Sakariya Kareem 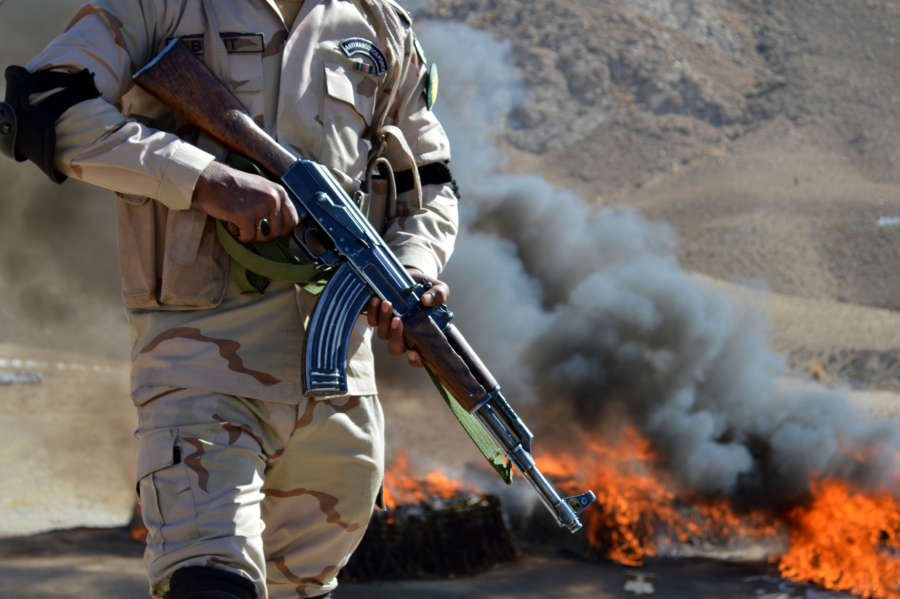 Pakistan may not be a failed state, but is certainly ‘frail’ and ‘faltering’, a top official has said of his country’s security. Mr Tariq Khosa, who headed the Federal Investigation Agency (FIA) and angered the country’s establishment despite being a part of it by squarely placing the blame of Mumbai terror attacks on his government, has in a just-published book painted a picture of Pakistan’s security landscape where the rule of law and the writ of the state have been grievously undermined.

“Pakistan is not a failed state, but it is definitely a frail state despite a strong and resilient society,” Khosa notes.

In an article published in Pakistani newspaper Dawn on August 4, 2015, Khosa had said that “Pakistan has to deal with the Mumbai mayhem, planned and launched from its soil.”

“The entire state security apparatus must ensure that the perpetrators and masterminds of the ghastly terror attacks are brought to justice. The case has lingered on for far too long.” 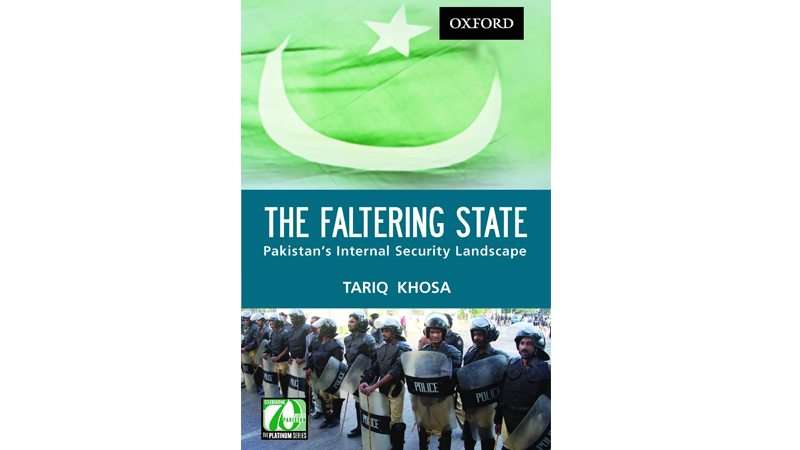 In his book The Faltering State, he laments that the Pakistani establishment has learnt no lessons and continues to use the so-called non-state actors as part of the state policy.

His honest, blunt talk has been noticed and appreciated outside his country. The United Nations Office on Drugs and Crime (UNODC) has just appointed him as its advisor on rule of law and criminal justice in Pakistan.

The UNODC had launched a four-year programme in June 2010 and Khosa will assist in its proper execution. The UNODC programme titled: Country Programme on Rule of Law and Criminal Justice, has been designed for improving the capacity of Pakistani law enforcement agencies and other components of the criminal justice system to meet challenges posed by the menace of organised crime. Apart from his new assignment, he will continue to function as Member Executive Committee of France-based Interpol.

Although part of the establishment — one of his brothers, Asif Saeed Khosa, is judge of the Supreme Court of Pakistan and the other, Nasir Khosa, is sitting Chief Secretary of Punjab – Tariq himself had faced ire a punishment from his superiors.

As for the book, it is bold and revealing in that it explodes many myths surrounding Pakistan’s evolving security narrative. It is revealing because his is the account of an insider who has worked with the law enforcement apparatus of the state for the past four decades at many levels.

The Faltering State, as the title suggests, epitomises Pakistan’s unfinished struggle against the forces of violence – terrorism, extremism and religious militancy – that have pushed the country to the brink of a disaster. Based on its author’s extensive and practical knowledge of how the administrative machinery has been manipulated by the ruling elite of the country to serve its parochial interests over the decades, the book paints a picture of Pakistan’s security landscape where the rule of law and the writ of the state have been grievously undermined. “Pakistan is not a failed state, but it is definitely a frail state despite a strong and resilient society,” Khosa notes.

Why has Pakistan faltered? Khosa lists many factors. These include: 1) The state’s failure to recognise that there are “no pro-state or anti-state” elements among those who pursue a violent agenda; 2) The deep state’s role in “creating the non-state actors” and its failure to see that these “militants are likely to unravel the state of Pakistan if we continue like this”; 3) The failure of the state to undertake investment in the justice system which is a “precondition for resolving disputes, guaranteeing the security of contracts and ensuring that people look to the state and not to outside interest groups for social, economic and political protection”; 4) The lack of political will which has turned the National Action Plan against terrorism and extremism into a National Inaction Plan.

The combined effect of all these factors has been the erosion of the power of the state and Pakistan’s dangerous drift towards lawlessness. Khosa boldly asserts: if Pakistan has become a faltering state, it is due to its own internal failings. “… no non-state actor can exist without support from visible or invisible state element and certain external players. A vigilant state and society can certainly defeat their nefarious designs. The counterterrorism National Action Plan was, essentially, the manifestation of national resolve to not only do away with the distinction between ‘good’ and ‘bad’ Taliban but [also] to eventually undertake surgical strikes against widespread militancy from our polity,” he observes.

Notwithstanding the claims about the effectiveness of such military operations in recent times as Zarb-e-Azb and Radd-ul-Fasaad, there are few signs that the state is actually displaying the much-needed unified resolve to launch surgical strikes for eliminating militancy from the country. As long as the state continues to accept unlawful demands by a handful of agitators bent upon making mischief to have their way, this resolve will keep showing massive cracks.

As highlighted by the Faizabad sit-in protests on the Ialamabad-Rawalpindi crossing in November 2017, when the rightwing extremists held the state to ransom, rather than defending the rights of millions of citizens, the federal government caved in to accept unreasonable demands by a couple of thousand religious protestors.

The officials – including those from the security and intelligence agencies – signed an agreement with the small but religiously charged mob that is widely believed to be nothing but an instrument of state surrender. The capitulation, in fact, started even earlier than the agreement was signed. The protests that went on for 20 days, during which religious extremists not only blocked the main artery linking Islamabad with Rawalpindi but also used foul language against the superior judiciary of the country and clashed violently with the law enforcers, represented the ultimate failure of the Pakistani state to curb those who are flouting its writ. Ironically, the “deep state” seemed to be encouraging these violent elements rather than discouraging them — many of them were given one thousand rupee bills by a senior officer in uniform as travel money to return home.

It is obvious from this particular instance that the Pakistani state has not learnt any lessons from its failed approach towards militancy and that it continues to dangerously swing between appeasement and control of the militant elements. The most detrimental consequence of this is that the law enforcement organs of the state, especially the police are demoralised.

Khosa discloses that this has been going on for decades. He recalls the time when he picked up a group of men armed with Kalashnikovs during late night patrols while working as superintendent of police in Quetta in 1981. They belonged to the Hezb-e-Islami of Afghan militant leader Gulbuddin Hekmatyar who at the time was fighting against the Soviet forces in Afghanistan. Khosa was asked to release them immediately. The orders for their release came directly from General Ziaul Haq.

On the basis of such incidents he points out: “Following 1979, Jihad became an instrument of state policy as non-state actors were inducted in one militant organization after another … The architect of this policy was none other than the military head of the state. We, the functionaries of the state, were required to look the other way. The resulting erosion of the state’s authority led to the nation paying a heavy price in terms of gunrunning, drugs, targeted killing, and organized crime, including violent extremism. People tend to blame the police for disorder and violence without delving into the root causes of large-scale violence and militancy in society.”

To effectively deal with the menace of armed militancy in the country, Khosa proposes a four-point national agenda: “One, adherence to the rule of law that guarantees individual rights and freedoms, equal opportunities to realize the national potential by creating an environment for social stability, and economic development. Two, ensure social justices so that all citizens live with dignity and honor, irrespective of their caste or creed. Three, achieve the tolerance so critical to building harmony through unity in diversity. Four, institutions must take precedence over individuals, irrespective of rank and authority.” He further emphasises: “The ascendancy of rule of law, a culture of tolerance and justice is vital for national security.”

The most interesting chapter of the book is the one that deals with the trial of those suspected to be involved in the 2008 terrorist attacks in Mumbai. In his revealing account, Khosa mentions certain facts on the basis of which he concludes that the “entire state security apparatus must ensure that the perpetrators and masterminds of the ghastly terror attacks are brought to justice”. Despite his plea, we know that the perpetrators of Mumbai attacks and their masterminds have been allowed to go scot-free.

The most important conclusion Khosa draws in his book can be summed up in his warning that the nation must not become complacent while dealing with the dangers of militancy.

If we do, “the demons of militancy can unravel the state of Pakistan”.

Khosa will be most remembered for his disclosures of the Mumbai attacks of 2008 for which he faced serious trouble from his government.

Khosa pointed out that Ajmal Kasab was a Pakistani and that the Lashkar-e-Taiba (LeT) terrorists who attacked Mumbai were trained near Thatta in Sindh and launched by sea from there.

“The training camp was identified and secured by the investigators. The casings of the explosive devices used in Mumbai were recovered from this training camp and duly matched.

“Third, the fishing trawler used by the terrorists for hijacking an Indian trawler in which they sailed to Mumbai was brought back to harbour, then painted and concealed. It was recovered by the investigators and connected to the accused.

“Fourth, the engine of the dinghy abandoned by the terrorists near Mumbai harbour contained a patent number through which the investigators traced its import from Japan to Lahore and then to a Karachi sports shop from where an LeT-linked militant purchased it along with the dinghy. The money trail was followed and linked to the accused who was arrested.

“Fifth, the ops room in Karachi, from where the operation was directed, was also identified and secured by the investigators. The communications through Voice over Internet Protocol were unearthed.

“Sixth, the alleged commander and his deputies were identified and arrested. Seventh, a couple of foreign-based financiers and facilitators were arrested and brought to face trial,” Khosa said.

The retired official said that the Mumbai case was unique, and that proving conspiracy in a different jurisdiction was more complex and required a far superior quality of evidence.

“Therefore, the legal experts from both sides need to sit together rather than sulk and point fingers.”

Khosa asked: “Are we as a nation prepared to muster the courage to face uncomfortable truths and combat the demons of militancy that haunt our land?”