During the bilateral talks in China, Jaishankar says the revocation of Kashmir’s special status and division of the state “had no bearing on Pakistan as it was an internal matter”…..reports Asian Lite News

India has conveyed to China that the change in status of Kashmir is an internal matter and would have no implication for its boundaries with Beijing.

External Affairs Minister S Jaishankar also sought to reassure his Chinese counterpart Wang Yi that India was not raising any additional territorial claims and the Chinese concerns in this regard were misplaced.

During the bilateral meeting with Wang, Jaishankar also emphasised that the revocation of Kashmir’s special status and division of the state “had no bearing on Pakistan as it was an internal matter”.

China has strongly backed its all-weather friend Pakistan over Kashmir, and voiced “serious concern” over the Kashmir situation, stressing that Kashmir is “a legacy of history between India and Pakistan”.

Talking firm, Jaishankar told Wang that the changes in Kashmir “did not impact the Line of Control”.

Last week, China termed the creation of Ladakh Union Territory as “unacceptable and void”, and accused India of “putting Chinese territory in the western section of the border under its administration, which affects China’s territorial integrity and sovereignty.

He said that regarding India-Pakistan relations, the Chinese side “should base its assessment on realities”.

Jaishankar said that India, as a responsible power, “had shown restraint in the face of provocative Pakistani rhetoric and actions”.

“India has always stood for normalisation of the ties in an atmosphere free of terror,” he said.

When Wang brought up developments pertaining to legislation passed recently by the Indian Parliament on Jammu & Kashmir, Jaishankar “conveyed that this was an internal matter for India. The issue related to changes in a temporary provision of the Constitution of India and was the sole prerogative of the country”.

“The legislative measures were aimed at promoting better governance and socio-economic development. There was no implication for either the external boundaries of India or the Line of Actual Control (LAC) with China. India was not raising any additional territorial claims. The Chinese concerns in this regard were therefore misplaced,” he said.

The reference to “additional territorial claims”, is an answer both to Beijing and to Pakistan, which has termed the moves on Kashmir as “annexation”.

“The Chinese Foreign Minister also referred to rising tensions between India and Pakistan as a result of these changes. EAM emphasised that these changes had no bearing on Pakistan as it was an internal matter. It did not impact the LoC. Where India Pakistan relations are concerned, Chinese side should base its assessment on realities,” an MEA statement said.

“India, as a responsible power, had shown restraint in face of provocative Pakistani rhetoric and actions. India has always stood for normalisation of the ties in an atmosphere free of terror,” the statement added.

Jaishankar told Wang that the future of India-China ties depends on mutual sensitivity to each other’s core concerns, and it is vital to “not let differences become disputes”.

Jaishankar held talks with Wang, and the two sides also inked four agreements, including in cooperation in sports, cultural exchanges and traditional medicine.

Jaishankar’s visit, which was meant to firm up the agenda for the second informal summit between Prime Minister Narendra Modi and Chinese President Xi Jinping, saw both sides also focusing on India’s moves on Kashmir — revocation of a special status for J&K and splitting the state into two.

Putting forth the vision for the future of India-China ties, Jaishankar said: “The future of the India-China relationship will obviously depend on mutual sensitivity to each other’s core concerns. It is natural, both as neighbours and large developing economies that there would be issues in our ties. 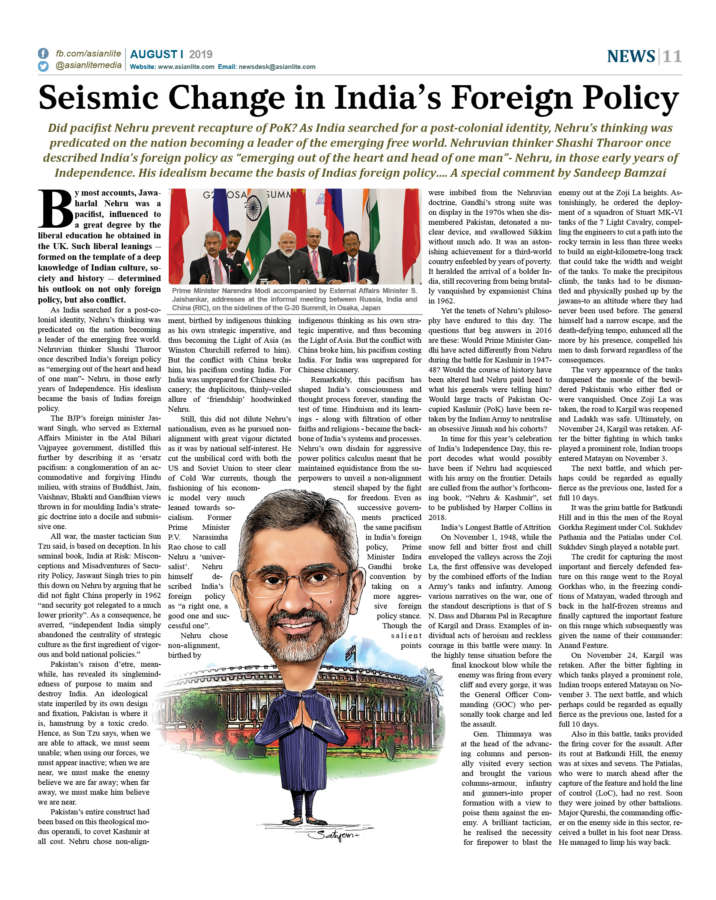 “Properly managing differences is therefore vital. As our leaders agreed in Astana, differences should not become disputes. That is how India-China relations can remain a factor of stability in an uncertain world.

“The positive direction of ties after the Wuhan Summit has opened up a world of new convergences. Exploiting this and taking our ties to a new level will require strong public support in both societies. The media can make a major contribution to that goal,” he said.

Jaishankar’s comments are significant as they also come three days after Wang’s meeting with Pakistan Foreign Minister Shah Mahmood Qureshi, who has sought Beijing’s support in censuring India at the UN Security Council over Kashmir.

Addressing the 2nd meeting of the India-China High Level Mechanism on Cultural and People-to-People Exchanges here, Jaishankar said he had held detailed and productive discussions with Foreign Minister Wang Yi.

“Our discussions were especially significant as we prepare for President Xi Jinping’s visit to India for the 2nd Informal Summit later this year and celebrating the 70th Anniversary of establishment of diplomatic relations next year,” Jaishankar said at the meeting held at the Diaoyutai State Guest House.

In his remarks, Wang said that China is closely following the escalation of tensions between India and Pakistan and urged New Delhi to maintain peace and stability.

Wang said the two sides held in depth talks, which are “especially important for the high level engagement for the second informal summit” between their leaders in October.

He said the two sides need to strengthen their economic cooperation mechanisms, including have more defence engagements, and deepen trade relations.

He also said that both sides need to live by the UN charter and “respect the sovereignty and territorial integrity of all countries and address all issues though dialogue”.

On the unresolved boundary question, Wang said both sides will use the mechanism of the Special Representatives to seek early progress as well as the CBMs in place.