The mastermind behind the Brexit in an interview with The Sunday Telegraph warns MPs that no-confidence vote would not halt October 31 exit. It’s too late to stop No Deal Brexit and added an election would lead to Tory majority 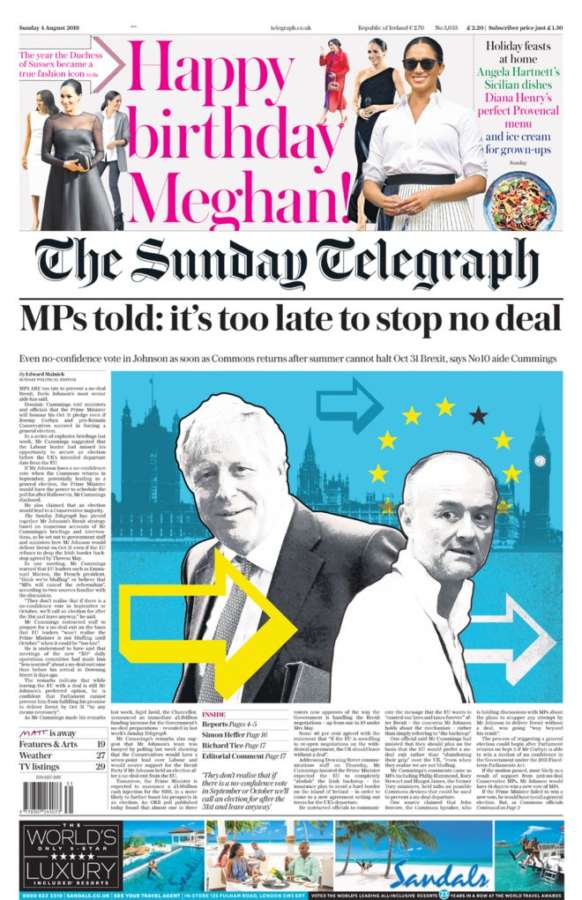 Prime Minister Boris Johnson’s de facto campaign manager Dominic Cummings says it is ‘too late’ to stop a No-Deal Brexit because the Prime Minister could delay a general election forced by a no-confidence vote until after October 31.

Mr Cummings in a series of briefings to civil servants last week that it was too late for Remainer MPs to force Mr Johnson out and stop Brexit from happening, the Sunday Telegraph reported.

The Prime Minister has pledged that Britain will leave the EU on October 31, ‘deal or no deal’ and there is no “Ifs or Buts.”

Mr Cummings set out the government’s Brexit strategy through a series of briefings to civil servants and ministers.  He revealed how the Prime Minister intended to leave the EU on October 31 – even if the EU refuses to drop the Irish border backstop.

According to the Sunday Telegraph, Mr Cummings also claimed that EU leaders like Emmanuel Macron think the no-deal threat ‘is a bluff’.

He said: ‘They don’t realise that if there is a no-confidence vote in September or October, we’ll call an election for after the 31st and leave anyway.’

The revelations come as Boris Johnson dramatically ramped up his war of words with Brussels by demanding that EU chief negotiator Michel Barnier reopens the Brexit deal – because he no longer has the authority to impose terms on the UK.

As part of a new ‘shock and awe’ plan by Downing Street to put the EU on the back foot, Mr Johnson’s Brexit Secretary Steve Barclay warned that Mr Barnier should be given new negotiating orders by the EU or face the inevitability of No Deal.

In a hard-hitting article for the Mail on Sunday, Mr Barclay argues that the European elections in May reconstituted the EU – meaning Mr Barnier’s mandate to insist on the harsh terms of the Withdrawal Agreement is no longer valid.

Mr Johnson is embroiled in a high-stakes, last-ditch effort to persuade Mr Barnier to drop the controversial Northern Irish backstop from the agreement in time to pass the measure through the Commons – a process he refers to as a ‘backstopectomy’. Theresa May’s failure to pass her deal in the face of trenchant opposition from MPs to the backstop led to the fall of her Government.