INDIA’S EXTERNAL AFFAIRS MINISTRY: “It was, inter alia, highlighted that the proposals which are currently under consideration of Parliament are internal to India. These are aimed at providing good governance, promoting social justice and ensuring economic development in Jammu and Kashmir”

India has conveyed to foreign envoys, including five permanent members of the UN Security Council (P-5) that the decision to abrogate Article 370 and split the state of Jammu and Kashmir into two are an “internal” matter aimed at providing good governance and economic development of the state.

“In the light of interest expressed by members of the diplomatic community in Delhi, senior officials of the Ministry of External Affairs are briefing the envoys of several countries, including P-5, on proposals related to Article 370 of the Indian Constitution and administrative reorganization of Jammu and Kashmir that were introduced in Parliament,” said a source.

The permanent members of the UN Security Council are China, France, Russia, the United Kingdom, and the United States.

“It was, inter alia, highlighted that the proposals which are currently under consideration of Parliament are internal to India. These are aimed at providing good governance, promoting social justice and ensuring economic development in Jammu and Kashmir,” sources added.

While neighbouring Pakistan has often sought third-party mediation in various international forums, including the United Nations, India has maintained that the issue can only be resolved bilaterally. 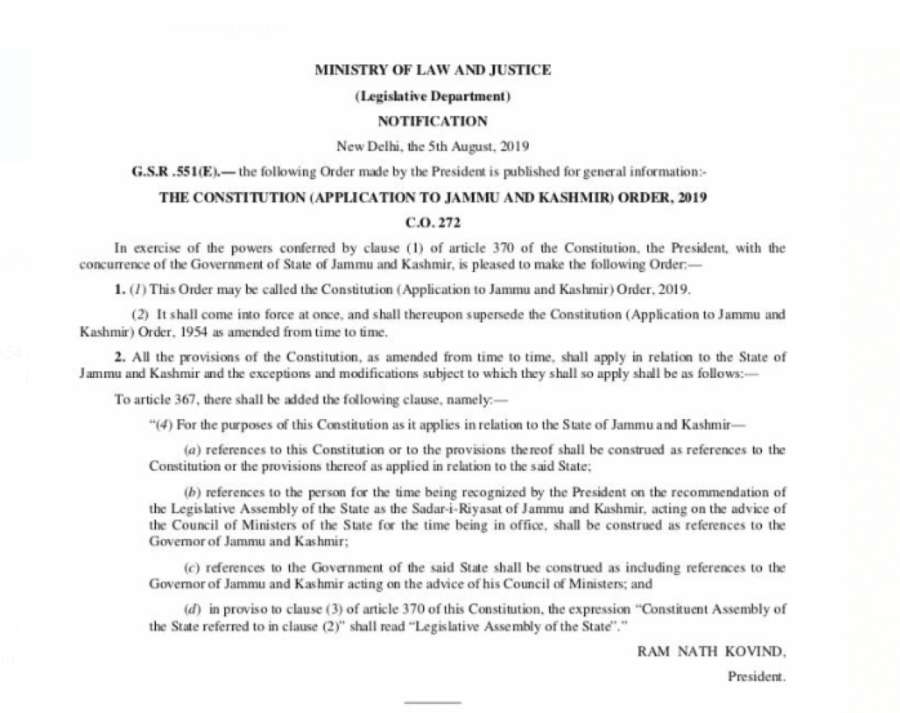 Government sources in New Delhi told Asian Lite that the changes were made to a “temporary” article which hurdles the integration and federalism of the republic of India and the rights of the citizens as per the Constitution of India. India followed all the legal and parliamentary procedures to bring the changes.

“Seventy years is a long time for something temporary. It lessened accountability, quality of governance and added to separatist sentiment,” the sources quoted the ministry as saying.

The Section 3 states: “Notwithstanding anything in the foregoing provisions of this article, the President may, by public notification, declare that this article shall cease to be operative or shall be operative only with such exceptions and modifications and from such date as he may specify.”

The ministry also said that vested interests did not want application of Indian laws in Kashmir. This had impact on investment, and led to gender discrimination. Fundamental duties were also not applicable in the state, the sources said.

The point was also made by Union home minister in Amit Shah in Rajya Sabha today while responding to the debate on the Jammu and Kashmir Reorganisation Bill. The minister said the Article 370 was an impediment to development in Jammu and Kashmir.

The US state department said it is “closely following” events in Jammu and Kashmir, but noted that India has described its actions as “strictly an internal matter.”

“We are concerned about reports of detentions and urge respect for individual rights and discussion with those in affected communities,” State Department spokeswoman Morgan Ortagus said in a statement.

“We call on all parties to maintain peace and stability along the Line of Control”, Ortagus said.

Ortagus said the US is “closely following” events in Jammu and Kashmir, but noted that India has described its actions as “strictly an internal matter.”

Mr Stephane Dujarric told reporters that over the past few days the UN Military Observer Group in India and Pakistan “has observed and reported an increase in military activity” along the highly militarized LoC.”

Germany called on the Indian government to hold discussions with the local communities in Jammu and Kashmir.

Ms Maria Adebahr, a spokeswoman for the German foreign ministry: “We believe that all further steps of the government must comply with India’s constitution. We are calling on the Indian government to hold dialogue with the population concerned about its plans, its intentions.

Britain’s Foreign & Commonwealth Office is yet to respond to the issue. Debbie Abrahams, Chair of the All Party Parliamentary Group on Kashmir and MP for Oldham East and Saddleworth, has written to India’s High Commissioner to the United Kingdom, Mrs Ruchi Ghanashyam and Foreign Secretary, Dominic Raab.

In the letter to Mr Raab, she asked “what action he is taking in the light of India’s threat to remove Article 370 from their constitution, and to the United Nations on the legality of India’s action under UN Security Council resolution 47.”

Indian High Commission said that “they didn’t receive any letter from British parliamentarians or groups and the changes taking place in Kashmir are purely an internal matter of India.”