US President Donald Trump abandoned the Iran nuclear deal to spite his predecessor Barack Obama, claimed a new leaked memo written by Kim Darroch, the UK’s former ambassador to the US.

According to the Mail newspaper on Sunday, the memo was written after the then Foreign Secretary Boris Johnson appealed to the US in 2018 to stick with the nuclear deal, the BBC reported.

Citing the leaked memo, the newspaper said that after Johnson returned to the UK from the US, Darroch wrote that President Trump appeared to be abandoning the nuclear deal for “personality reasons” because the pact had been agreed by Obama.

The former British Ambassador is said to have highlighted splits amongst US presidential advisors and that the White House did not have a “day-to-day” strategy of what to do following withdrawal from the deal.

The Mail newspaper reported that Darroch wrote a memo to Johnson, saying: “The outcome illustrated the paradox of this White House: you got exceptional access, seeing everyone short of the President; but on the substance, the administration is set upon an act of diplomatic vandalism, seemingly for ideological and personality reasons – it was Obama’s deal. 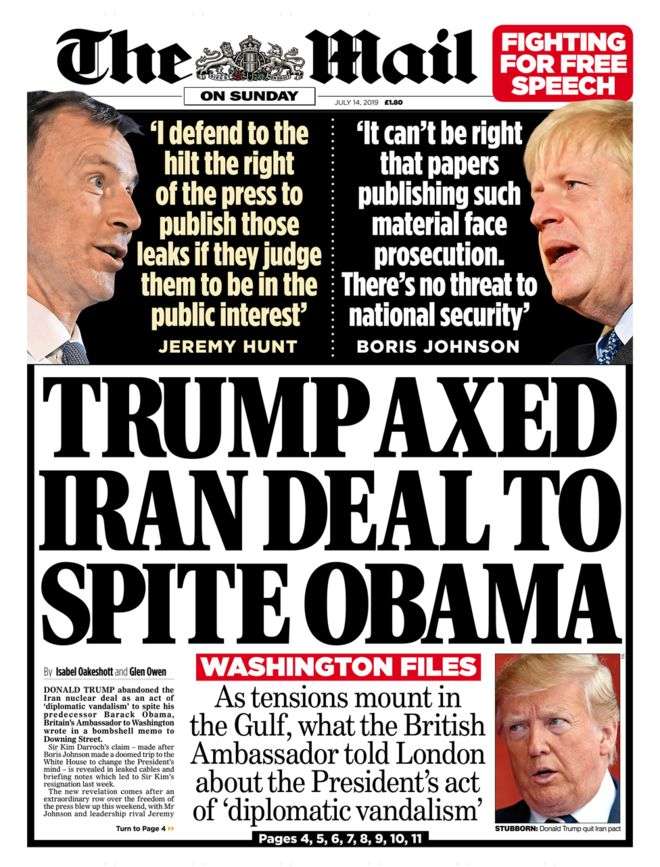 “Moreover, they can’t articulate any ‘day-after’ strategy; and contacts with State Department this morning suggest no sort of plan for reaching out to partners and allies, whether in Europe or the region.”

The latest disclosure comes despite a warning from Scotland Yard to the media about publishing leaked diplomatic memos, the BBC reported.

They warned that journalists who released further details of the former Ambassador’s communications could be in breach of the Official Secrets Act.

The first memos, which emerged exactly a week ago on July 7, saw the then UK Ambassador refer to the Trump administration as “clumsy and inept”, which prompted a furious response from the US President, who described Darroch as “a very stupid guy” with whom he would no longer deal.

The UK government launched an internal Whitehall inquiry into the publication following the reports.

But Darroch stepped down as US ambassador on Wednesday, saying it was “impossible” for him to continue.

Following his resignation police launched a criminal investigation into the origins of the leak with Scotland Yard’s Assistant Commissioner Neil Basu saying there was a “clear public interest” in bringing those responsible to justice.