According to the film trade magazine, “Complete Cinema”, a total of 164 films released during the year 2019 as compared to 177 in the previous year. What is heartening is that, the success ratio has gone up better than what has been the norm all these years…reports Asian Lite News 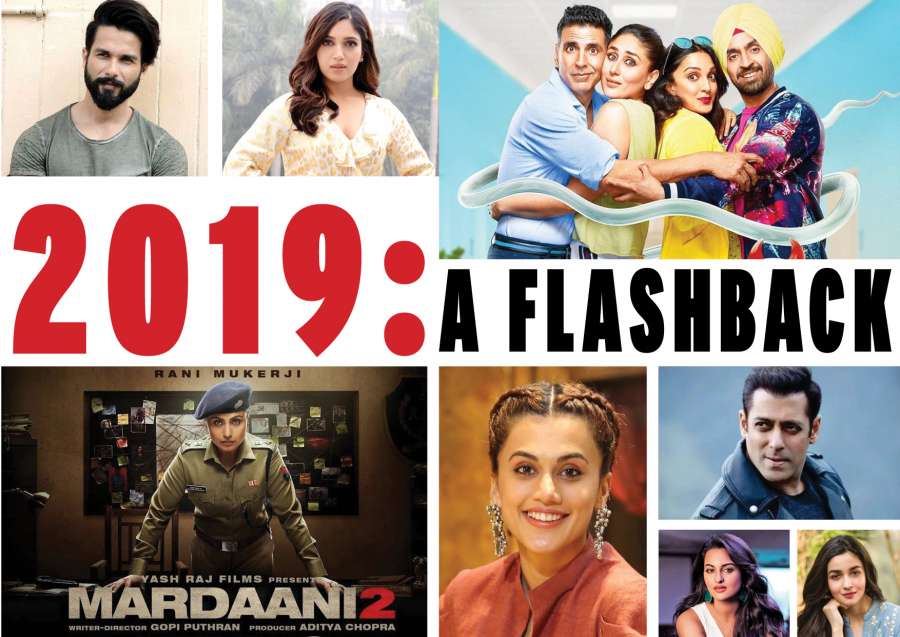 As if following a tradition, the year 2019 also offered a mixed bag. As usual, the year saw a few hits, some big flops and a huge list of also-ran films.

There may have been a few more films produced, censored and ready for release, but lacking resources to take them to the cinema halls. Once upon a time, dubbed films used to flood the cinema halls during the dull periods like Ganesh Festival, Navratris, Pre Diwali and such. Now, they are shown on TV.

The positive aspect is that a newer, younger lot of stars are taking over. Fortunately, these new stars are not yet slotted as action, comedy or romantic stars. Luckily for them, they have been cast in a variety of roles and they have been carrying them through ably. Being slotted really limits a star’s scope of showing versatility. Once slotted, the audience does not readily accept changeover. Like, when Shah Rukh Khan tried to stray from romantic roles with “Ra.One”, “Zero” or “Fan”. Aamir Khan wisened up in time to shift to playing kind of character roles with “Dangal” and “Secret Superstar”. Salman Khan is the only star who excelled in all kinds of films. While also loved in comic films, starting from “Wanted” (2009) his other films were not accepted as well as his action movies. The non-action films that worked for him were ones where he played a do-gooder, like in “Bajrangi Bhaijaan”, “Jai Ho” or “Bharat”.

While Aamir Khan and Shah Rukh Khan had no new releases this year, Salman had two — “Bharat” in May and “Dabaang 3” at the end of the year during Christmas.

The mythical 200 and 300-crore era is over. At least, for the time being. With that, the risk factor has also reduced drastically because the recovery targets have become more achievable. Investment to recovery, the prospects are better now.

According to the film trade magazine, “Complete Cinema”, a total of 164 films released during the year 2019 as compared to 177 in the previous year. What is heartening is that, the success ratio has gone up better than what has been the norm all these years.
While new generation actors have taken over, surprisingly it is the veteran of many films with a career spanning three decades — Akshay Kumar — is the one who is ruling the box-office. Not only does he lead a disciplined life but also makes sure he does four films a year and yet keeps almost half a year free for his personal life. Box-office wise, the best thing about his films is that they are made within a stipulated budget and, hence, always prove cost-effective.

Thanks to this, Akshay emerged with a 100 per cent success ratio this year with four releases, all proving to be hits. Three of his films, “Kesari”, “Mission Mangal” and “Housefull 4” proved to be hits while, the way it is performing at the box office, his yearend release “Good Newwz” is set to be a superhit.

Another actor who scored a cent percent strike rate is Ayushmann Khurrana. All his three films released during the year hit the bull’s eye. While “Article 15” and “Bala” proved to be hits, “Dream Girl” rates as a superhit.

Kartik Aaryan also had two releases, “Luka Chuppi” and “Pati Patni Aur Woh”, and both proved to be hits.

Vicky Kaushal started slow doing films like “Masaan” in 2015 and “Raazi” in 2018, followed by “Sanju” the same year. He impressed in all three and got huge commercial success in 2019 with “Uri: The Surgical Strike”, a superhit by all standards. He will have to be careful about what projects he chooses in future.

Ranveer Singh carried forward his success story with one release, “Gully Boy”. The film is a hit. He has an impressive line-up for the New Year in “ ‘83”, “Jayeshbhai Jordaar” and Sooryavanshi, where he has a cameo.

Another actor, Rajkummar Rao, who is known to play varied roles though they may not always be centred on him, had three releases in “Ek Ladki Ko Dekha Toh Aisa Laga”, “Judgemental Hai Kya” and “Made In China”, scored zero as none of his three films worked at the box office.

Another young star who has established himself as a versatile actor — Varun Dhawan — had just one release this year, “Kalank”, which failed, while his cameo on Salman Khan-starrer, “Bharat”, was deleted at the editing stage.

Of the seniors, John Abraham has taken to playing a cop or a spy. While “Batla House” was a face-saver, the other two — “Romeo Akbar Walter” and Pagalpanti — did not work out.
Amitabh Bachchan figured in one film this year, “Badla”, and that was a hit.

Hrithik Roshan and Shahid Kapoor reasserted their standings this year. Hrithink, who one thinks is the cool guy who avoids the rat race, came up with two hits, “Super 30” and a blockbuster in “War”. In the process, “War” also elevated Tiger Shroff to a new high. The failure of his “Student Of The Year 2” was more than compensated by “War”. Shahid Kapoor finally got his blockbuster in “Kabir Singh”. Ajay Devgn managed with one hit, “Total Dhamaal”, and one flop, “De De Pyar De”.

Anil Kapoor featured in three films this year while his contemporary, Jackie Shroff had as many as five releases.
As for female lead actors, the reigning star, Alia Bhatt had one success, “Gully Boy”, as against two non-performers, “Student Of The Year 2” (where she just had a special dance number) and “Kalank”. Yami Gautam had two hits with “Uri: The Surgical Strike” and “Bala”. Kangana Ranaut had one hit, “Manikarnika”, and one flop, “Judgemental Hai Kya”.

Kriti Sanon had as many as five releases this year. “Panipat” and “Arjun Patiala” were losers, as against three hits — “Pati Patni Aur Woh” (where she had a cameo), “Housefull 4” and “Luka Chuppi”.
Taapsee Pannu had a fifty-fifty score with “Mission Mangal” and “Badla” doing well while “Saand Ki Aankh” and “Game Over” failing to score. Parineeti Chopra stayed in contention with “Kesari” while her other release, “Jabariya Jodi”, could not perform.

Rani Mukerji kept up, with her franchise film “Mardaani 2”. Kareena Kapoor had one release, “Good Newwz”, a hit.
Deepika Padukone and Anushka Sharma had no new releases this year.

Bhumi Pednekar, who made her debut as an obese housewife in “Dum Lagake Haisha” (2015), has since cut down her flab, to rate among the top contenders, came up with two hits, “Bala” and “Pati Patni Aur Woh “and two failures, “Sonchiriya” and “Saand Ki Aankh”.

Katrina Kaif had a just one film, “Bharat”, which did well.
Debutante Tara Sutaria had two films this year, “Marjaavaan” and “Student Of The Year2”, both below par. Kiara Advani consolidated her position with “Kabir Singh” and “Good Newwz”, despite one dud in “Kalank” (where she had a special dance number). Isha Talwar stayed relevant with one moderate success, “Article 15”.
Sonakshi Sinha had a line-up of six films. While “Mission Mangal” and “Total Dhamaal” worked, the other four — “Kalank”, “Khaandani Shafakhana”, “Laal Kaptaan” (she had a cameo) and “Dabaang 3”, did not. For Shraddha Kapoor, “Chhichhore” did well. Nushrat Bharucha made her mark in a solo release, “Dream Girl”. Priyanka Chopra had just one release, “The Sky Is Pink”.
As things worked in 2019, this is how the films worked:
The year had the best ratio of 22 films that managed to be either hit or, at least, sustain.

The year saw five super hits in “Uri: The Surgical Strike”, “War”, “Dream Girl”, “Kabir Singh” and “Good Newwz”.
The hits of the year were as many as 15.
The two films that managed to remain above par were: “Batla House” and “Commando 3”.

The films which disappointed and belied the expectations were: “Saand Ki Aankh”, “Pagalpanti”, “Panipat”, “Dabaang 3” and “Kalank”.
There were 132 also-ran kind of films, some of which defy logic as to why they were made at all!

@ The Box Office
* The first Friday is considered unproductive for new films and is normally avoided by the producers who believe so. Yet, desperate for a playtime, many makers are compelled to go ahead with a release on the first Friday of the year. So, the first Friday of 2020 — January 3 — is a crowded affair. The new films this week are: “Sab Kushal Mangal”, “Bhangra Paa Le”, “Acid” and “Shimla Mirch”.

Akshay Kumar excelled this year with four films, all of which were hits. While there is a dearth of new ideas and writers, he goes ahead with either films on nationalism or films that are socially relevant. The latest is “Good Newwz”, a film about in-vitro fertilisation (IVF). What works about the film is that, although it is a seriously relevant topic, the film is treated to entertain. Also, Akshay does not shy away from experimenting with the casting of his films (this is his home production).

* “Good Newwz” hit it off from the very first day and made the most of the weekend with about Rs 65 crore and also benefited because of the midweek Christmas holiday, with which its four-day figure almost matched the weekend and this is considered outstanding for any film. The film went on to collect about Rs 125 for the week and faces little opposition in its second week.

* “Dabangg 3” showed that the franchise has been stretched a bit too far, taking the audience for granted and without working on the script (such films need many gags). While the film failed to impress in the first week, it dropped badly in week two, collecting just about Rs 20 crore. The two-week tally for the film stands at Rs 132 crore.

* “Mardani 2” has collected a total of Rs 45 crore after three weeks.