After being banned temporarily by several airlines, stand-up comedian Kunal Kamra is taking sarcastic jibes at the situation on social media.

In a separate tweet, he wrote: “FYI – Arnab Goswami was in my flight again this morning while returning from lucknow… I again asked him politely if he wants to have a honest discussion he with his verbal arrogant hand jester he asked me to move away & I did that…”

The comedian shared a video on Twitter where he can be heard asking his co-passenger Arnab Goswami: “Viewers today want to know if Arnab is a coward or a nationalist. Arnab, this is for national interest. I am part of the tukde-tukde narrative. You should deflate me. You should take the enemy of the states down. You should make sure that the country is in safe hands of Narendra Modi. You should fight against dynasts like Rahul Gandhi, who I support, on 10 Tughlaq Lane. Arnab, you should have a reply, Arnab. Arnab, are you a coward or are you a journalist? Are you a coward or are you a journalist or a nationalist? Who are you, Arnab?” 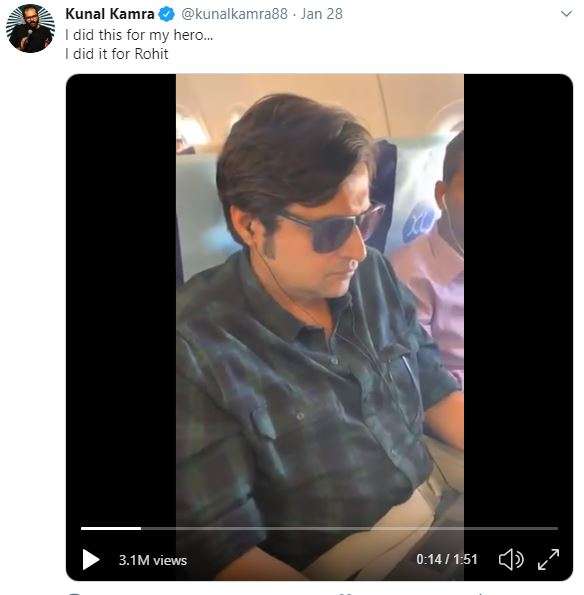 However, Arnab Goswami chose to remain quiet and did not answer back.

Earlier, Kamra alleged that Goswami has called him mentally unstable. He tweeted: “Met Arnab Goswami on a flight and gave him a monologue about his ‘journalism’. All he did was call me mentally unstable and after sometime I had no choice but to return to my seat. The entire flight I’ll keep pretending to use the loo just to tell him he’s piece of SH*T. F*CK Arnab”.

On Tuesday evening, Indigo issued a statement via Twitter where they announced that they are banning Kunal Kamra for six months for his in-flight behaviour.

“@MoCA_GoI @HardeepSPuri In light of the recent incident on board 6E 5317 from Mumbai to Lucknow, we wish to inform that we are suspending Mr. Kunal Kamra from flying with IndiGo for a period of six months, as his conduct onboard was unacceptable behaviour.”

“Hereby, we wish to advise our passengers to refrain from indulging in personal slander whilst onboard, as this can potentially compromise the safety of fellow passengers. @MoCA_GoI @HardeepSPuri.”

Following this, Union Minister for Civil Aviation Hardeep Singh Puri tweeted: “Offensive behaviour designed to provoke and create disturbance inside an aircraft is absolutely unacceptable and endangers safety of air travellers. We are left with no option but to advise other airlines to impose similar restrictions on the person concerned.”

After this, Air India and Spice Jet also banned the stand-up comedian until further notice.

Air India tweeted: “In view of the incident onboard @IndiGo6E, Air India wishes to inform that conduct of Person concerned is unacceptable. With a view to discourage such behavior onboard flts, Mr Kunal Kamra is suspended from flying on any Air India flt until further notice. @HardeepSPuri.”

However, netizens are divided in their reaction to the situation. While some are bashing Kunal Kamra for his in-flight behaviour, others are supporting him.

Congress MP Shashi Tharoor tweeted in support of Kamra. Taking a dig at Arnab Goswami, he wrote: “The truth is that it was time someone gave him a taste of his own medicine. These are the words he regularly uses to berate his innocent victims, except he does so in a hectoring, bullying manner & at higher volume & pitch than @kunalkamra88 does in this video.”