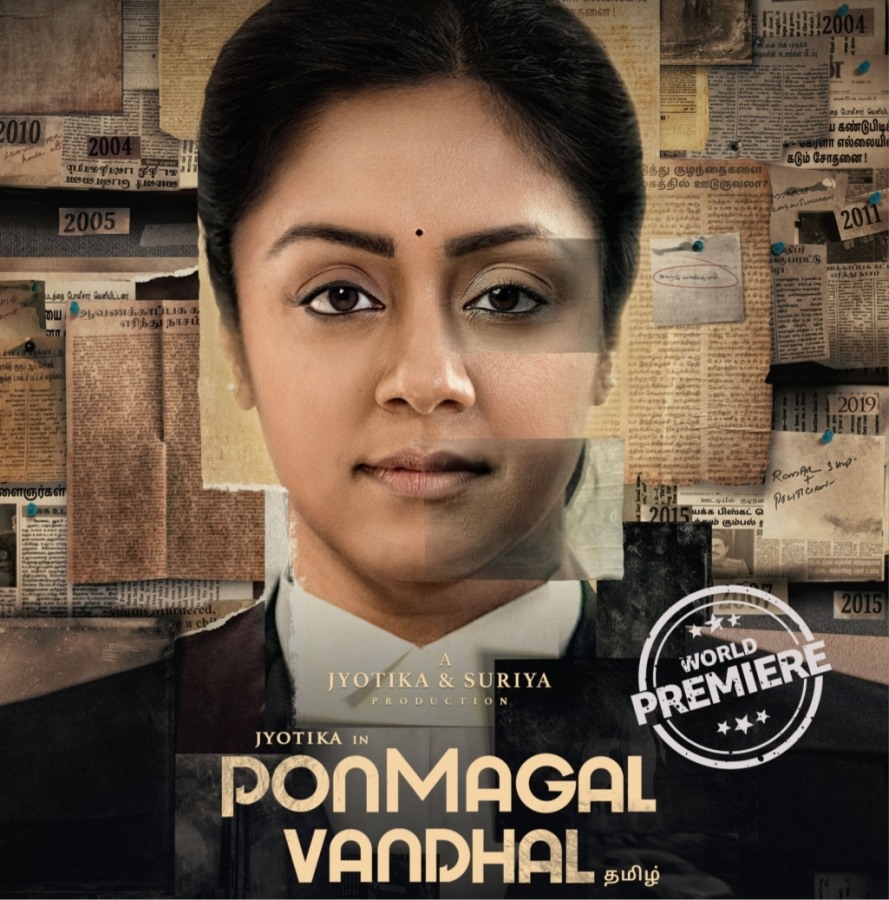 There are two things that define “Ponmagal Vandhal”. The first is Jyothika, as the film’s protagonist who blazes through an authorbacked role in a project produced by her husband, Tamil superstar Suriya. The second is the message in the story. The film tries making a strong comment against rape and the sexual abuse of the girl child, which renders a noble intent to the effort.

Strangely, these very factors, on which everything about this film — from script to marketing — seems to hinge, also become a burden as the minutes pass.

Jyothika’s image as a star seems to weigh down the narrative every time things just begin to look different. You realise debutant writer-director JJ Fredrick is hardly interested in crafting any sort of cutting-edge entertainment out of this film, which has been billed as a courtroom drama, because there is the wider fan base to be appeased. The narrative struggles to rise above set-piece mediocrity, and ample melodrama is re-hauled intermittently to justify Jyothika’s acting skills.

While on the film’s message, the makers are too obsessed with hammering it into the audience’s brains, for the attempt to have any impact beyond plasticity.

“Ponmagal Vandhal” tries highlighting a contemporary societal evil using archaic filmmaking devices. Black and white characters thrive in a plot that demanded shades of grey. The cliched cinematic treatment is highlighted by a key character whose arrival on the screen, from his very first scene, is aided by loud ominous background music every time — in case you missed the point that he is the one the script will ultimately demonise.

Lack of imagination also reveals itself in the execution of a trademark tragic funeral scene where it is invariably raining and the mourners have gathered under umbrellas. The way certain characters suddenly have a change of heart towards the end, and become righteous, is hard to believe. Not to forget, a climax showdown sequence between Jyothika and antagonist Thiagarajan that squarely seems to borrow a creative slice from the Tom Cruise-versus-Jack Nicholson finale in “A Few Good Men”.

Tamil prejudice against North Indians, caste and class discrimination, and honour killing are other stock paraphernalia touched upon, to set up this ‘realistic’ film.

Yet, Fredrick’s script starts off on a note that is far from cliched. The story begins with the mention of a female serial killer. The character prototype is a rarest of rare specimen in mainstream cinema anywhere in India, and you are straightaway interested. An Ooty resident named ‘Petition’ Pethuraj (K. Bhagyaraj) reopens a 16-year-old case pertaining to a serial killer named Psycho Jyothi, who had been convicted for the kidnap and killing of several children.

The case was closed a long time ago, and when Venba (Jyothika), Pethuraj’s lawyer daughter, seeks its revival, there is outrage among all, over why the father-daughter duo wants to rake up a painful past. Soon, the stage is set for a courtroom showdown between Venba and a hotshot lawyer named Rajarathinam (R. Parthiban), who has been appointed by the powerful politician Vardharajan (Thiagarajan).

There is a dark secret that has prompted Venba’s decision to take up the case, and the screenplay basically unfolds what it is.

As Venba gets on with her fight for justice, the element of novelty gradually starts disappearing from the plot. Courtroom dramas thrive on fiery and absorbing exchanges between lawyers. Nothing of that sort happens here. Venba sheds copious tears inside the courtroom and rambles on with tedious monologues to impress the judge, rather than furnish any solid evidence that would seem convincing.

Her quest for justice becomes a laboured exercise in predictability before (no surprises) it is left for the social media hashtag weaponry to swing the case.

Jyothika fans will not be disappointed, for she is in traditional form as the unbeatable protagonist. Thiagarajan tries adding a quiet, understated menace to his antagonist Thiagarajan, and manages only as much as a badly-scripted film will let him. Most of the balance cast does sufficiently in their prop roles.

“Ponmagal Vandhal” is the first of the many films that Amazon Prime have acquired, and have been flaunting over the past weeks. The film is certainly not a scintillating advertisement to the direct-to-OTT gameplan.