Every year they used to sing songs together under one roof and listen to the story associated with this festival, but this year they celebrated the festival digitally on Skype, WhatsApp and Google chat. 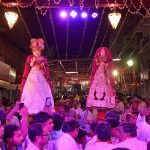 In fact, this is for the first time in the nearly three century old history of Jaipur that the Gangaur Festival failed to make a mark with no royal procession being taken out as has been a ritual each year since 1828.

The City Palace administration took this historic decision in the wake of government advisory which did not allow more than five people to gather at one place in wake of Covid-19 pandemic outbreak.

Ramu Ramdev, who looksafter Jaipur’s museum, said this is the first instance when Gangaur procession has not been taken out here since the formation of Jaipur princely state. However, the prayers were offered by a few people inside the palace.

Jaipur state came into being in 1728 and the ritual to take out Gangaur procession with pomp and fervour started from 1828 from City Palace. Thereafter, year after year, this ritual became a part of the city’s culture.

In fact, Gangaur procession was also taken out before the formation of Jaipur when the state capital was in Amer, he said adding that Kuchhwaha rulers had brought this festival.

Holi, diwali and Gangaur etc have been regular festivals whose celebrations have never stopped even amid many calamities which had hit earlier including plague, cholera etc. However as this corona crisis is linked to human calamity, this procession for first time in three centuries was not taken out, he said.

Police officials issued an advisory requesting women to stay at home and celebrate the festival online. Even the women of the same family were directed to maintain the principles of social distancing while praying at home.

The women take out a mega procession on this festival where they sing songs, dance and walk with dhol decked up with the best attire and gold and silver jewellery before offering their prayers to Shiv and Parvati.