A leading microbiologist from Russia has claimed that the novel coronavirus, which originated in Chinas Wuhan city, is the outcome of “crazy” experiments conducted by scientists at the Wuhan Institute of Virology.

In an interview to Russian daily Moskovsky Komsomolets, translated in a report by the UK-based Daily Mail, noted scientist Professor Peter Chumakov said, “They did absolutely crazy things, in my opinion.”

He said the Chinese scientists created “variants of the virus without malicious intent”, possibly aiming for an HIV vaccine.

The statement comes even as Russian President Vladimir Putin’s government has been warning against conspiracy theories which claim that coronavirus is laboratory-engineered.

Chief researcher at the Engelhardt Institute of Molecular Biology in Moscow, Chumakov in the interview, however, said that the picture of the possible creation of the current coronavirus is slowly emerging.

Scientists at the Wuhan Laboratory, he said, have been actively involved in the development of various coronavirus variants for over 10 years.

“Moreover, they did this, supposedly not with the aim of creating pathogenic variants, but to study their pathogenicity,” he said.

According to the microbiologist, there are “several inserts, that is, substitutions of the natural sequence of the genome, which gave it special properties.”

“For example, inserts in the genome, which gave the virus the ability to infect human cells. Now all this has been analysed… The Chinese and Americans who worked with them published all their works in the open (scientific) press,” Chumakov said.

However, the academic, who is also connected to Russia’s Federal Research Centre for Research and Development of Immunobiological Preparations, said it was too early to blame anyone.

After an investigation is initiated, new rules will be developed that regulate the work with the genomes of such dangerous viruses, he said.

Earlier, Veronika Skvortsova, head of Russia’s Federal Medical-Biological Agency (FMBA), and Putin’s ex-health minister, was asked on Russia’s Channel One if the pandemic virus could be manmade.

“This question is not that easy. It demands a very thorough study. None of the versions can be ruled out,” she had responded, adding, “We can see that a fairly large number of fragments distinguishes this virus from its very close relative, SARS. They are approximately 94 per cent similar, the rest is different. I think that we must conduct a very serious research.

On Russia’s initiative, the heads of the foreign affairs ministries of the BRICS countries will hold a special meeting via video conference to discuss the impact of the coronavirus pandemic on international relations next week. 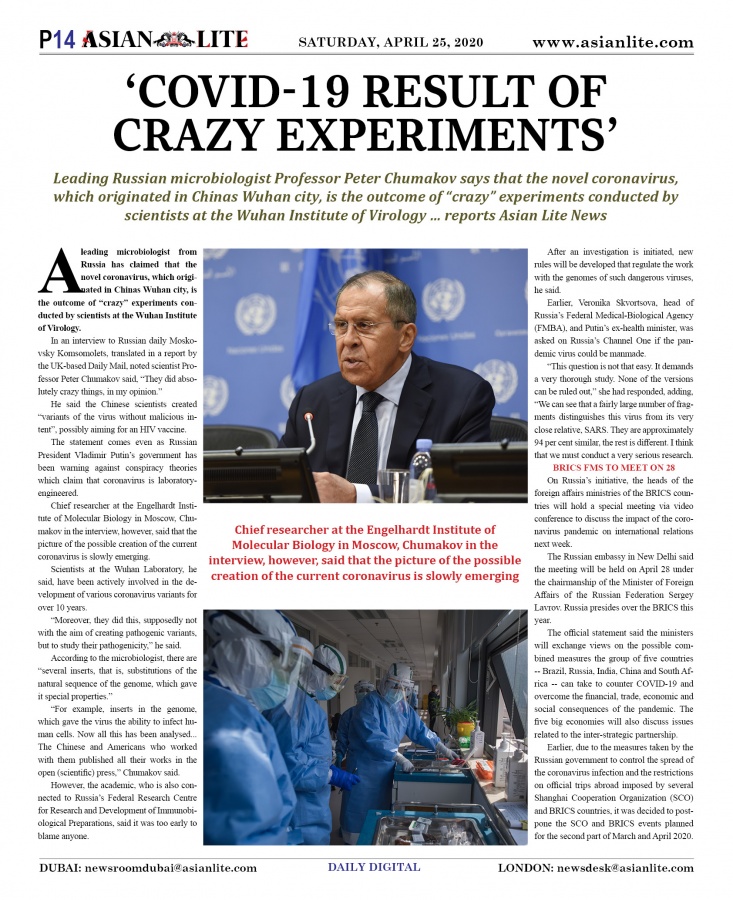 The Russian embassy in New Delhi said the meeting will be held on April 28 under the chairmanship of the Minister of Foreign Affairs of the Russian Federation Sergey Lavrov. Russia presides over the BRICS this year.

The official statement said the ministers will exchange views on the possible combined measures the group of five countries — Brazil, Russia, India, China and South Africa — can take to counter COVID-19 and overcome the financial, trade, economic and social consequences of the pandemic. The five big economies will also discuss issues related to the inter-strategic partnership.

Earlier, due to the measures taken by the Russian government to control the spread of the coronavirus infection and the restrictions on official trips abroad imposed by several Shanghai Cooperation Organization (SCO) and BRICS countries, it was decided to postpone the SCO and BRICS events planned for the second part of March and April 2020.

Also Read – TOLL CROSSES 18,000: Thanks For Your Skewed Strategy