A gradual reopening of activities will begin in Italy from Monday, after residents spent a number of weeks in confinement due to the coronavirus pandemic, while churches in Germany resumed prayer services on Sunday.

In Italy, which has been one of the worst affected countries in the world, residents on Sunday spent their final weekend in strict lockdown, reports Efe news.

The rate of fresh infections and hospitalisations has been decreasing in recent weeks, which has led the government to announce a partial reactivation of the economy from next week.

Throughout last week, public transport has been adapted in cities such as Rome, with markings on seats on the metro and buses to prevent overcrowding.

Meanwhile in Germany, also one of the worst-hit countries in Europe, churches opened for Sunday services for the first time since the COVID-19 lockdown began on March 22, the BBC reported.

Last week, German authorities said playgrounds and cultural institutions such as museums and zoos would be given the green light to re-open. 2But Chancellor Angela Merkel has said that the federal and state governments will not make a decision on the hospitality industry at their next meeting on May 6, but instead focus on further relaxing the rules for schools, childcare centres and sports facilities.

Germany’s death toll rose by 74 to 6,649 in figures released on Sunday, while the number of confirmed coronavirus cases increased by 793 to 162,496, data from the Robert Koch Institute (RKI) for infectious diseases showed.

In other parts of Europe, Portugal will begin de-escalation measures from Monday, with small shops and hairdressers due to reopen, although authorities have warned that the risk has not disappeared.

There have been more than 1,000 deaths and 25,100 confirmed cases in the country, which is home to around 10 million people, with a recent decline in the number of daily fatalities and cases.

Meanwhile, the French government has decided to extend the state of health emergency, imposed since March 24, until July 24, since lifting it “would be premature” as the risks of a resurgence were present as the cases escalated to 168,518, with 24,763 deaths.

Similarly, Spanish Prime Minister Pedro Sanchez has that he will ask Parliament next week to extend the State of Alarm that was imposed on March 15, for another 15 days when it expires on May 9.

His remarks came on Saturday when a majority of Spaniards were allowed outdoors to take exercise for the first time after seven weeks of virtual lockdown.

For the first time, Belgium reported less than 100 daily COVID-19 cases, while it was also preparing to reopen certain businesses from Monday.

Authorities will also increase the level of outdoor exercise for residents, including non-contact sports such as tennis, athletics, fishing, kayaking, and golf. 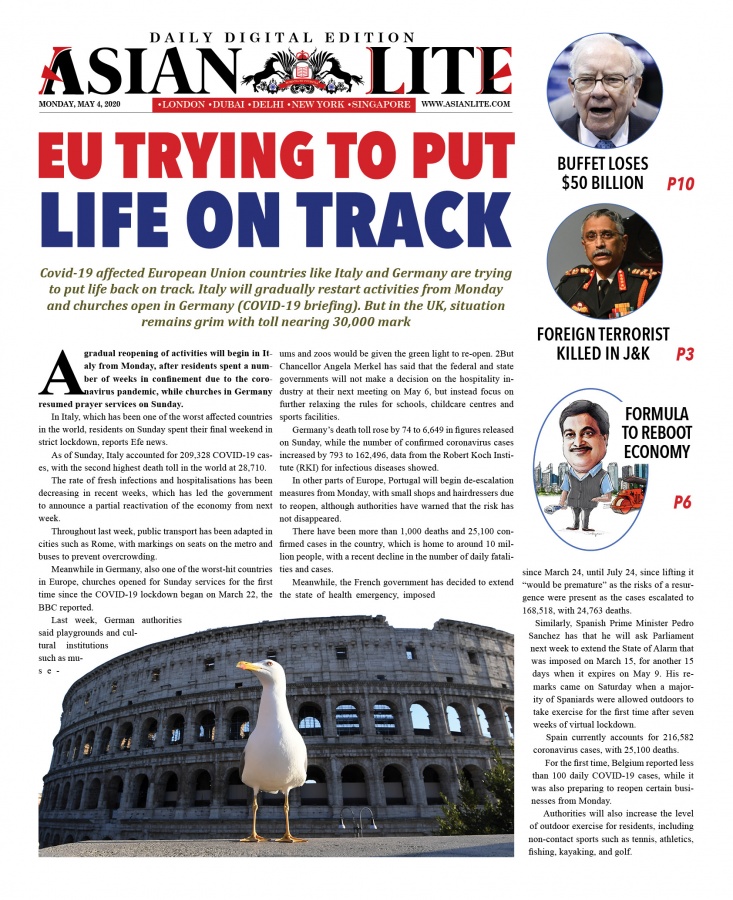