Working backwards from the Rs 20 lakh crore economic package indicated on Tuesday economists estimate that it could be around 10.71 lakh crore.

After sounding out several economists, policy mavens and financial experts, the surmise is that the working of the Rs 10 lakh crore will play out on these lines. When one adds the earlier stimulus of Rs 10 lakh, then the matrix may look like this.

In a televised address to the nation, Prime Minister Narendra Modi announced special economic package; comprehensive package of Rs 20 lakh crore and the total package equivalent to 10 per cent of India’s GDP.

He noted that this package, taken together with earlier announcements by the government during COVID crisis and decisions taken by RBI, is to the tune of Rs 20 lakh crore, which is equivalent to almost 10 per cent of India’s GDP. He said that the package will provide a much needed boost towards achieving eAtmanirbhar Bharat’. Finance Minister Nirmala Sitharaman will announce the details of the package in the coming days.

This would taken into consideration the fiscal stimulus package number 1, the RBI package and the various tax sops announced in the Union Budget.

As per one working calculation by economists, the nominal GDP is Rs 200 lakh crore. The covid fiscal stimulus part 1 was Rs 1.70 lakh crore. 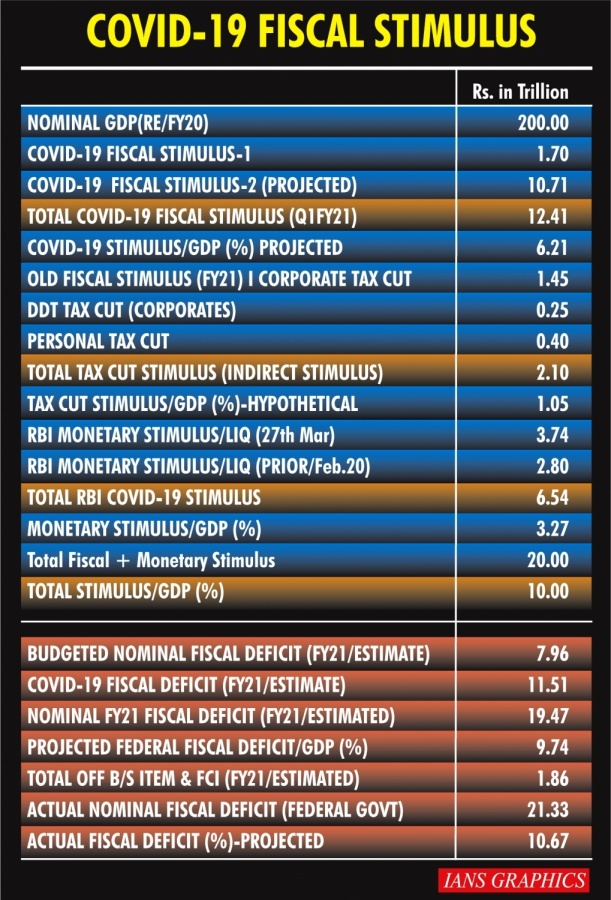 The RBI had also announced a monetary stimulus which needs to be factored in. One package on March 27 was worth Rs 3.74 lakh crore while the one announced in February was Rs 2.80 lakh crore. The total RBI package becomes Rs 6.54 lakh crore which is 3.27 per cent of GDP.

Combining all this makes the total of fiscal and monetary stimulus at Rs 20 lakh crore which is 10 per cent of GDP.

“Includes the Rs 10 lakh cr@RBI and Rs 1.7 lakh cr by @nsitharaman still Rs 8.3 lakh cr is huge considering our fiscal constraints,” he said in another tweet. 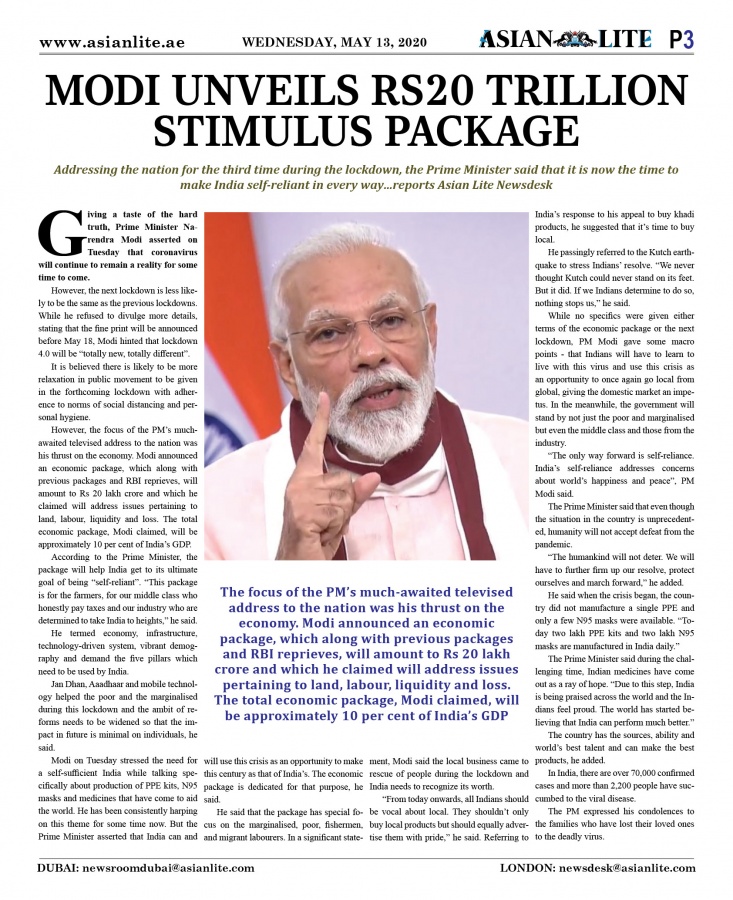 Suman Chowdhury, Chief Analytical Officer at Acuite Ratings & Research said that the announcement of a Rs 20 lakh crore package for revival of the economy is definitely welcome although the details will need to be understood as and when they are disclosed.

“Further, it will also be important to figure out the financing methods as large additional government borrowings from any of the sources will have implications on not just fiscal position but other macro indicators like inflation,” he said.

Acuite nevertheless, believes that the announcement goes beyond a particular stimulus amount and reflects the government’s intent to alter the economic narrative through substantial reforms that will facilitate large scale private and public sector investments towards ‘Make in India’ and infrastructure projects, thereby generating employment opportunities.