One of the countrys tallest Islamic scholars, Kanthapuram A. P. Aboobacker Musliyar, is the Grand Mufti of India and President of the Islamic Community of India. Based in Kozhikode in Kerala, the 89-year-old Islamic scholar is widely respected across the world and has good relations with top leaders cutting across political parties and is a widely travelled personality.

In an exclusive interview with, he speaks on various issues. Here are the excerpts:

Q: This is the month of Holy Ramzan, and is generally the month of penance, love and togetherness. However, the Covid19 pandemic has led to a ban on congregations, community prayers and other community movements associated with this holy month. How do you see this?

A: COVID-19 has already deeply affected all spheres of our life. Experts believe that this is one of the greatest challenges humanity has faced in its long history. For a believer, it’s painful to see mosques being closed, especially in the blessed month of Ramadan.

But Islam already has very strict guidelines for the functioning of its institutions in the time of such calamities. Our beloved Prophet himself had alerted us of such events and issued guidelines accordingly. When I checked in the library attached to my office in Jamia Markaz, I saw several books written specifically on this topic, aiming to be alert and the lifestyle to be adopted during the time of calamities. Most of these legal, medical, and historical texts were written centuries ago. The texts written on the basis of experiences of various communities who lived through pandemics are really eye-opening.

Islam is a religion very much doable in isolation and quarantine. One important factor that facilitates this easiness and flexibility in practising religion in isolation is the profound absence of priesthood in Islam.

Q: Lakhs of our countrymen are abroad and the government of India has commenced one of the largest evacuation operations in history. As a person connected with several West Asian countries where a sizeable population of non-resident Keralites lives, what is your opinion on this?

A: As a community that has immensely contributed to the well-being of society and the economy of their homeland, we owe them a debt of extra care. So, one can understand their demand to come back to India. We cannot even think of any other options here, particularly when the whole world is battling a virus. These are the gestures any responsible society and government will show to their fellow countrymen and it is only part of our minimum courtesy towards the ‘Pravasis’.

I think we are not very late. We should keep in mind that the current crisis naturally makes one feel to return to one’s place of belonging and be among the loved ones at home. I think that’s how one should see this evacuation operation.

Q: With around 2.5 lakhs of non-resident Keralites expected to come back to the state, don’t you think that it will be a herculean task for the governments — both at the Central and state levels? Will the governments be able to repatriate and rehabilitate them?

A: Migration has been an indispensable phenomenon throughout human history. If you take a global, open-minded approach towards migration, especially issues faced by migrant labourers, their rehabilitation won’t be a herculean task. For this to happen, both the host and home countries should join hands together, think of working together in solving their issues. This is equally true in the case of internal migrants. The images of stranded migrant labourers in the metropolitan cities of the country and the reports of their deaths in many parts of the country only show how narrow-minded our policies are towards migrant labourers within our own territory. Many of the initiatives taken by states like Kerala are a good beginning in this regard.

Q: Irrespective of religions, state governments across India have taken stringent action against those who have violated government advisories. However, the action taken against the Tablighi Jamaat leaders triggered a heated debate in India and abroad. What’s your take on this?

A: My feeling is that if we go by reports available to us, it would not be fully correct to claim that we took a similar approach and legal action against all the people and collectives who had violated the lockdown regulations. We would be able to overcome these difficulties only through structurally assimilating the idea of equality. Now, let’s consider the issue of Tablighi Jamaat. I personally disagree with many of its ideas and the way of its functioning. I have had dialogues with them many times in the past. But I disagree with the shady campaign that is going on, linking Tablighi Jamaat with the spread of Covid 19 in India. Of course, the Tablighi Jamaat should have been more careful while organising their congregation at a time when numerous instances of Covid-19 spread had already been reported in our country.

As a Muslim collective, it was their religious obligation to do so. At the same time, we shouldn’t ignore the fact that if the Tablighi congregation was allowed to begin and continue at a time when formal restrictions were already in place, then the responsibility should equally be shared by the organizers and the officials who allowed it to happen. Instead, the actions and accusations against Tablighi have turned in part into a vicious vengeance-filled campaign against the entire Muslim community in various parts of the country. There are also reports which indicate that this malicious campaign has turned into physical violence in some areas. This is not how a democratic society deals with contingencies.

Q: There are several reports provided by various Central agencies which confirm that a multitude of foreigners who attended the Tablighi Jamaat Markaz flouted the country’s visa norms. Being a responsible religious institution, is it ideal for Tablighi Jamaat to function in this manner?

A: I am not aware of the exact details of the particular case that you mentioned. If it is as mentioned in your question, then it should be dealt with in the legal framework of our country which has well established provisions and penalties for such infringements. I expect it to be dealt with as such. Everyone has an equal responsibility to respect the law and order of the country. Nobody can stay away from that duty. 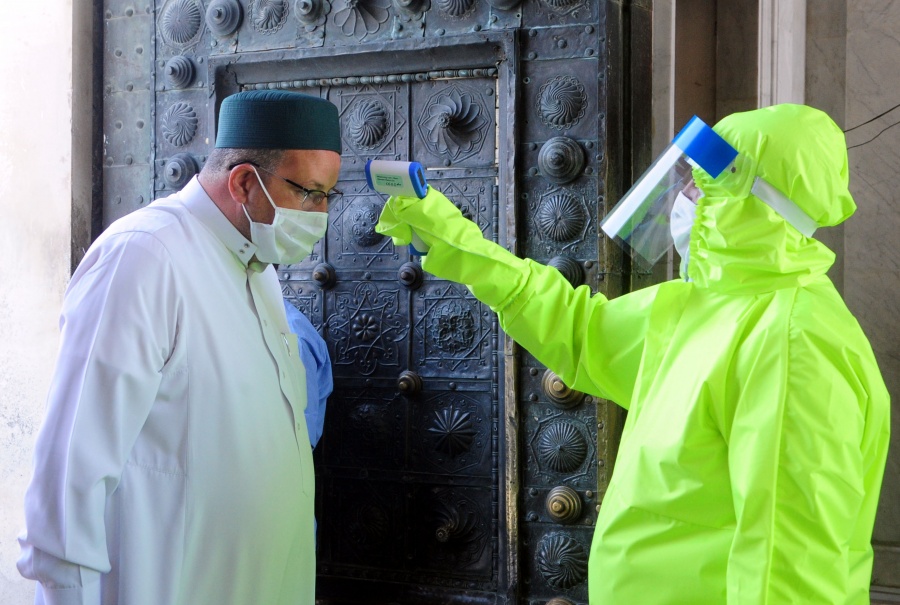 Q: How do you see the Pakistani-sponsored Islam phobia propaganda in West Asia against India?

A: First of all, in my view, we need to demarcate between Pakistan-orchestrated propaganda against India and the genuine grievances raised by our countrymen. We need to see what Pakistan does as a part of their foreign policy objectives and this has been going on since 1947. This is an issue which we need to tackle with our proactive foreign policy. But the genuine grievances of our citizens must be dealt with internally within our democratic framework. The dignity of the nation is the pre-eminence of its citizens too. I get many opportunities to represent Indian Muslims in various international forums and I make use of these opportunities to uphold the greatness and tradition of our country. I wish and pray that such opportunities remain in abundance so as to uphold truthfully the traditions and pre-eminence of our country.

Q: Despite the Union government ensuring safety and security of minority communities and extending certain privileges, such as scholarships and other financial aid, there’s an attempt to misguide the Muslim youth. Is this an orchestrated move to misguide the youths?

A: First of all, there is a problem in seeing reservation and scholarships as a privilege. Rather, such attempts are parts of minority rights in this country. Coming to the second part of your question, I don’t think that as a community, Muslim youths in this country can be misguided by anyone. Our historical experiences do not allow us to believe so. 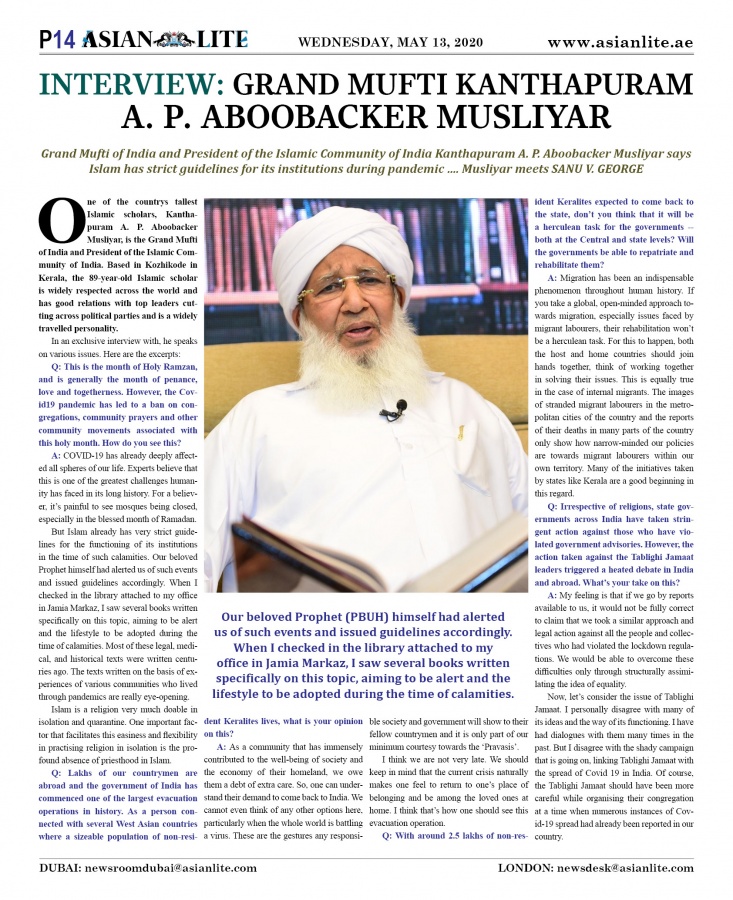 Q: Is there a shift in the leadership of Indian Muslim community from religious supremos like you to the youth, which was evident during anti-CAA campaigns? Do you think this new trend, i.e. the radical youth replacing the mature religious heads, will help the Muslim society in the long run?

A: Basically, this question comes from an assumption that ant-CAA protests were carried out by a particular section of Muslims alone. It’s not true. As a responsible citizen of this country, I see the anti-CAA protests as a rare platform in the history of post-independent India where people from a variety of backgrounds, irrespective of their religion, caste, age and other backgrounds, came together to extend their support to uphold the democratic spirit and constitutional values of this country. It’s true that CAA, which makes religion as criteria for citizenship in this country, may first and foremost affect Muslims. But in the protest against this Act, Muslims were not alone. In many parts of the country elected Chief Ministers led the protests against CAA. I personally had many opportunities to attend such protest gatherings in various parts of the country. Many political observers opined that this was a unique experience in the history of our country. When I got an opportunity to interact with our Prime Minister and Home Minister in their offices in Delhi recently, I personally requested them to take these protests seriously and repeal the controversial provisions in CAA and NRC.

A: Islam has many institutional mechanisms such as zakath, swadaqa, hadiya etc. to make sure that Muslims do care for people around them. Caring people with illness is considered a very pious act in Islam. It’s a religious obligation for Muslims to donate a certain portion of their wealth each year to charitable causes. Apart from this obligatory order, there is a provision in Islam where people are asked to donate their wealth, in some case entire wealth, that is over and above what is required to provide the essential needs of a person’s family.

I had made a request to Muslims to generously donate from the money reserved for charity activities in Ramadan to the government’s Distress Relief Funds. We know that fighting catastrophes is really an expensive task and governments alone cannot achieve this. They truly require support from other agencies. Muslims have religious obligation to extend such support and I am happy that many of them are doing it very well. 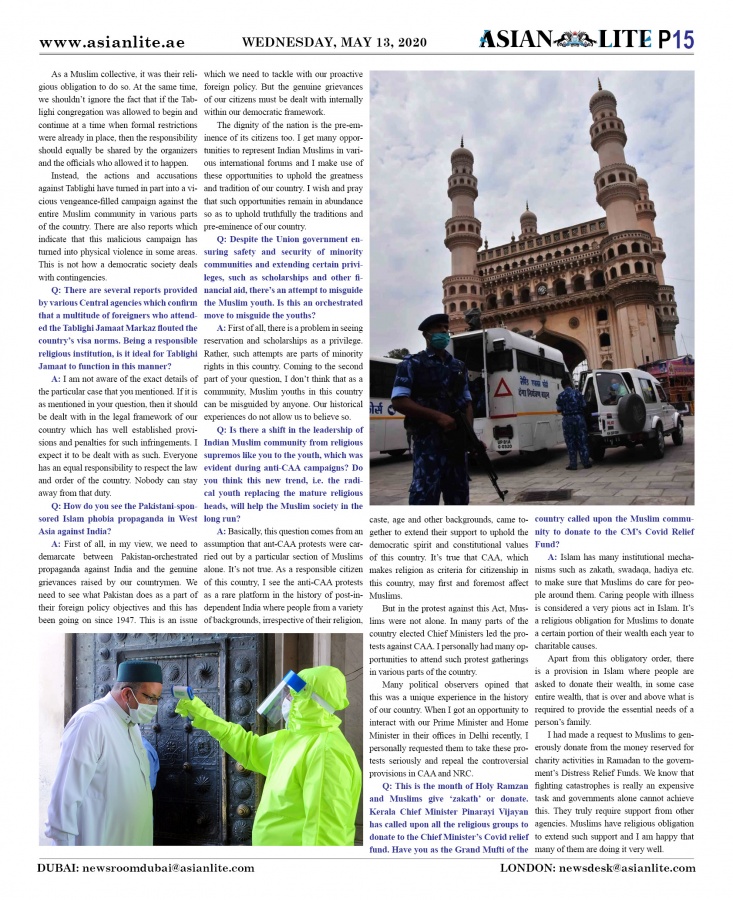