China, in a bid to divert the worlds focus and growing global resentment against Xi Jingping’s regime and its handling of the Covid 19 pandemic, is now resorting to escalation of border disputes both on land as well as sea, senior Indian intelligence agency officials said on Friday.

“Unlike India, which has the world’s highest massifs as natural boundaries to its north and east, flood plains and deserts to its west and a vast expanse of ocean to its south, China has a geography problem and it is now resorting to aggressive approach for twin reasons – to flex muscle against those criticizing its role in spreading the deadly virus and to create conflict in peaceful areas so that international media and forums’ attention is quietly moved away from the pandemic,” said a senior government officer.

It is well-known fact that hemmed in by Japan and South Korea to the east, India to the west, Taiwan and ASEAN countries to the south, China has naturally developed a tendency to push its boundaries, both on land and at sea. This is evidenced by irredentist claims of China in the South China Sea and border disputes with nearly all its neighbours, mostly for economic reasons, which has not taken a politico-military colour.

In the specific case of India, China’s recent protestations along border areas of Ladakh and North Sikkim are perplexing since these areas are amongst the most desolate and inhospitable regions in the world. “Differing perceptions of the Line of Actual Control (LAC) are normally ‘settled’ at the level of junior officers and should not require pompous statements from Global Times, the mouthpiece of the Chinese government,” said the officer further adding that to understand the complex relationship, it is important to turn the pages of the history.

Home to the two greatest ancient civilizations, Indus Valley and Yangtze Basin, India and China are inexorably bound by history and geography. The name ‘China’ also comes from the Sanskrit ‘Cina’, derived from the name of the Chinese Qin Dynasty, and was popularized by the ancient Silk Road. Famous Chinese travellers Faxian (400 AD) and Hsuan Tsang (600 AD) also traversed through the length and breadth of ancient India, centuries after Buddhist monks from India introduced Buddhism to the Han dynasty.

India and China also share a common history, from ancient warring kingdoms to the yoke of colonialism. Both countries re-emerged into global consciousness after the Second World War, an impoverished but intrepid people. Experimentation with socialism laid the foundations of the nations and acceptance of the open-market system has propelled both these countries onto the world centrestage today.

While China’s growth has boosted its position to the world’s second largest economy, India is presently fifth. Bilateral trade between these two Asian powerhouses has also touched $100 billion, although skewed in China’s favour (India has a $63 billion trade deficit). Both countries are among the largest in the world in terms of land area, human capital and resources, with a combined population so large that nearly every second person on our planet is either an Indian or a Chinese.

In this civilisational and economic context, India stands out as a steadfast neighbour, often placing the combined interests of both countries above its own. Despite China’s expansionist approach India has consistently supported the ‘One China’ policy, even though this was not reciprocated on the issue of Jammu & Kashmir, Sikkim and Arunachal Pradesh.

“Indian Prime Minister Indira Gandhi vociferously supported China’s claim for the UN Security Council seat in 1971, while China has repeatedly blocked Masood Azhar being listed as a global terrorist,” the officer explained. Conscious of sensitivities of the Chinese government, India kept the issue of Tibet, exiled Dalai Lama and Tibetan refugees on the backburner, only to have the Chinese government pronounce Jammu & Kashmir as a ‘disputed’ region.

Further, the Chinese government is well aware that their investments and infrastructure development in the Union Territory of Ladakh’s Gilgit-Baltistan under the China-Pakistan Economic Corridor (CPEC) infringe on core sovereignty issues of India. India chose the path of a liberal, vibrant democratic polity while China chose communism albeit with ‘Chinese characteristics’; however, it is a fact that India has never questioned the freedom of the Chinese people to choose their form of governance. 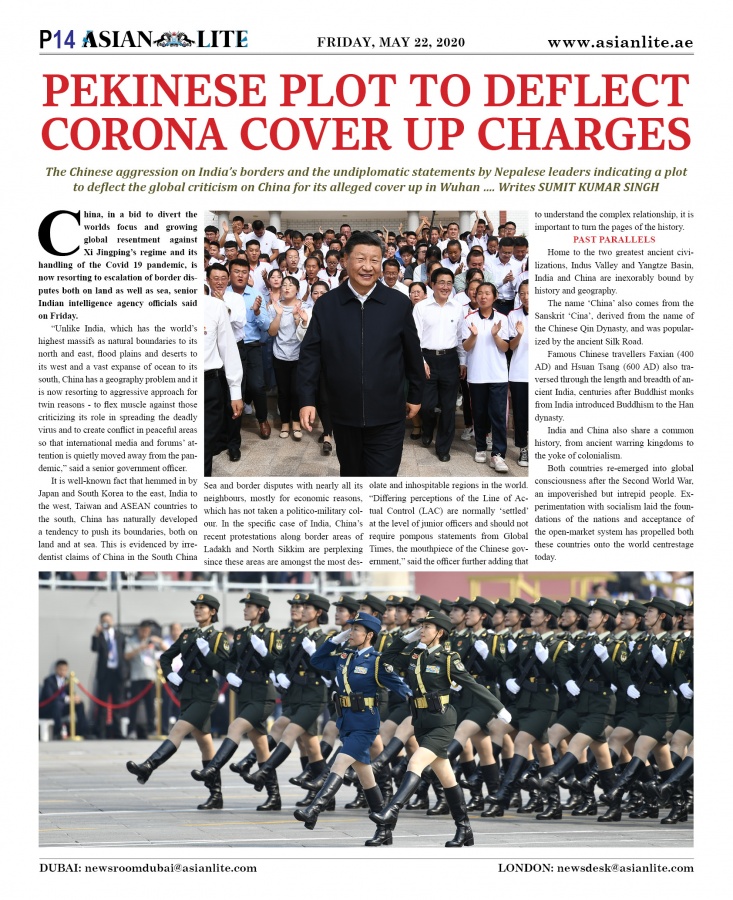 Being a multi-cultural and multi-ethnic society, India too has faced challenges within its social fabric, but has never judged China on these issues, be it the treatment of Uighur Muslims in Xinjiang province, alleged human rights violations, ‘one child policy’, lack of privacy, restrictions on religion. Chinese incitements and support of terror, China’s open support to Pakistan, its ‘Iron Brother’, in terms of missile and nuclear proliferation, military support and collusive agenda against India, is also a thorn in the bilateral relationship.

It is a known fact that China has been covering Pakistan’s terror factories on international fora and even defended dreaded terrorists like Masood Azhar. It is a Chinese ploy to endorse and support Pakistan’s use of proxies to inflict serious damage on India. Even in the face of these incitements from the Chinese, successive Indian governments have adopted a policy of mutual reconciliation and dialogue.

High-level visits, informal summits, meetings of special representatives on border issues and such other mechanisms have been put in place over the years and are being pursued by the Indian side, which always believed in resolving issues through dialogue. The Doklam crisis, which unfolded over nearly three months in the summer of 2017, stands out as an example of the efficacy of the bilateral dialogue mechanisms, even for highly vexed issues. 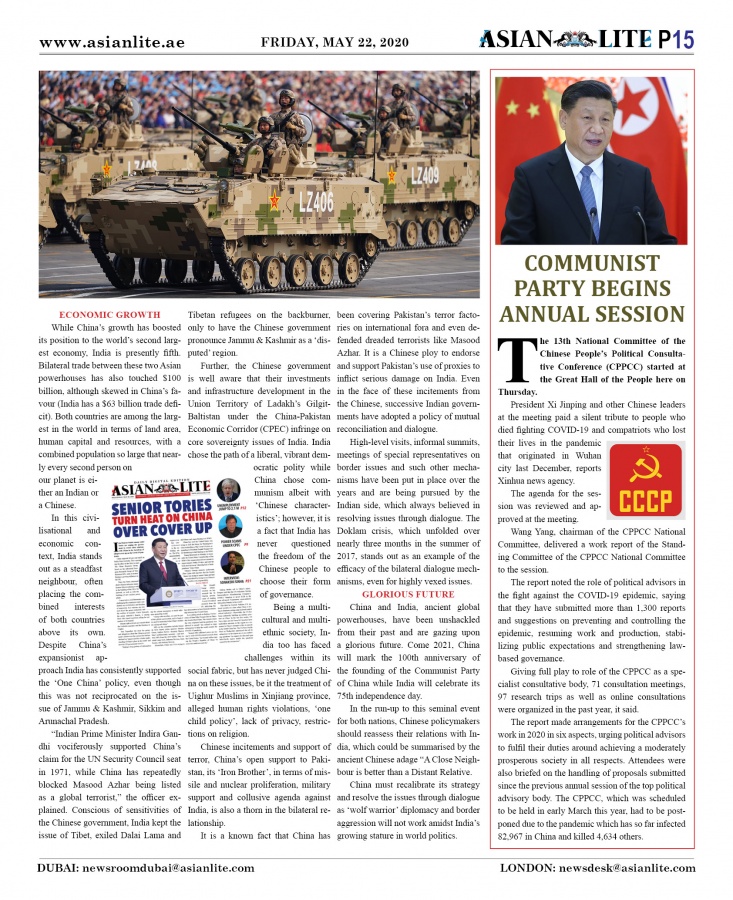 China and India, ancient global powerhouses, have been unshackled from their past and are gazing upon a glorious future. Come 2021, China will mark the 100th anniversary of the founding of the Communist Party of China while India will celebrate its 75th independence day. In the run-up to this seminal event for both nations, Chinese policymakers should reassess their relations with India, which could be summarised by the ancient Chinese adage “A Close Neighbour is better than a Distant Relative.

China must recalibrate its strategy and resolve the issues through dialogue as ‘wolf warrior’ diplomacy and border aggression will not work amidst India’s growing stature in world politics.