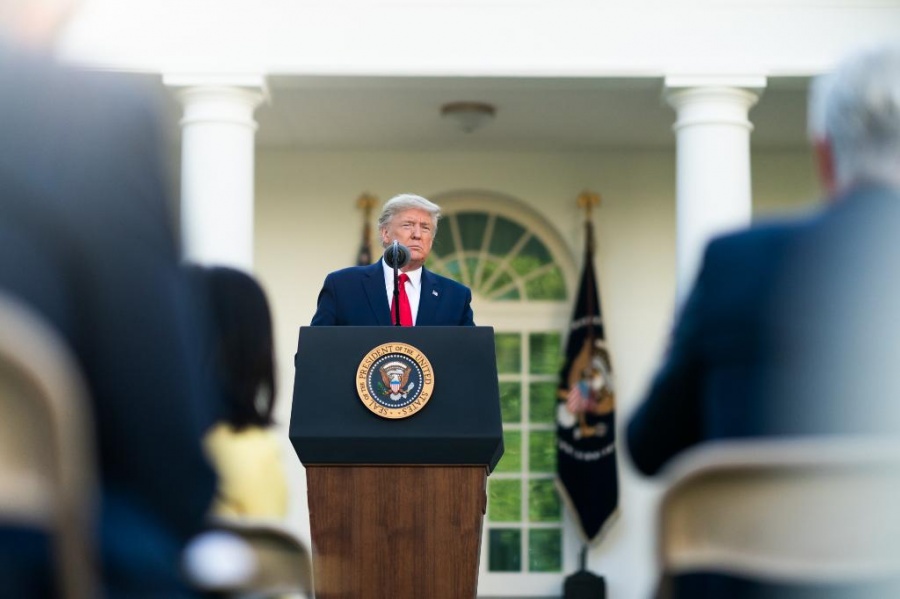 “We are opening up our great country,” Trump declared on Thursday with his two highly regarded medical advisers, Anthony Fauci and Deborah Birx at his side.

The plan requires states to meet basic criteria called “gating” before Governors can move them into the three phases of opening that takes into account the diversity of the country.

Any setback will push them back into the more rigorous earlier phase.

Trump unveiled the guidelines after a teleconference with state Governors where he told them: “You’re going to call your own shots.”

By leaving the decision to the Governors after having asserted that he has the authority to end the restrictions nationwide, Trump is avoiding a show-down with recalcitrant governors and also making them face the consequences.

Trump’s plans to restart economic and social activities in a nation facing serious economic and social setbacks have met with opposition from Democrats and some public health experts who think it is premature and could lead to coronavirus flare-ups.

Even a phased, geographically targeted plan may not mollify them.

New York’s Democrat Mayor Bill de Blasio said that he had told Trump and Vice President Mike Pence that the restrictions should be kept everywhere because the areas with low infections now could end up like his city.

Democrat Speaker Nancy Pelosi has told her legislators to rely on scientists and not on Trump and warned that Americans cannot return to work safely unless there is adequate testing.

Fauci, who is widely respected by the nation and so far by Democrats, backed Trump calling the plan “a rather robust program for re-entering into normality”.

He gave the assurance that for the physicians, scientists, or public health experts involved in developing the plan “the predominant and completely driving element that we put into this was the safety and the health of the American public”.

“We are a very large country and we have different dynamics in the country,” he said explaining the phased and targeted reopening.

But he also warned: “There may be some setbacks that we may have to pull back a little. And then go forward.”

Trump initially wanted to loosen the restrictions on April 12, Easter Sunday, but on the advice of his medical experts, he held off. His next target date was May 1 and he may be able to partially meet it.

There have been public protests in some places against the lockdown.

The US has so far managed keep the infections and deaths far below the predictions of deaths that ranged from 2.2 million to 240,000 to 80,000 according to different models and scenarios of mitigation.

Some states have very few cases like Wyoming, a mostly rural state that has recorded only 296 cases and two deaths, while the pandemic’s epicentre New York has had 293,661 cases with 14,832 deaths as of Wednesday evening.

Because of this, Trump leaves it to the Governors to decide how to proceed based on the guidelines developed by the medical experts in conjunction with the Centers for Disease Control and Prevention.

Trump said that some states already meet the gating criteria and can start the first phase “tomorrow”.

Birx, a respected physician and epidemiologist who won her spurs in the battle against AIDS, is the coordinator of the White House Coronavirus Task Force and she outlined the plan in detail.

To be gated in order to begin the phases, a state will have to have a downward trajectory of people with both influenza and COVID-19 symptoms as well those testing positive for the disease, in addition to having adequate testing for health care workers.

In the first phase, some of the workers can return to work in phases, with special accommodation for vulnerable people and social distancing, but telecommuting will be the preferred method.

Vulnerable people will be under Stay-at-Home rules and others will have to observe social distancing and groups of more than ten will not be allowed to socialised.

Religious meetings and events like sports can take place under social distancing norms.

If there is no rebound and the states again meet the gating requirement like cases going down further over 14 days, they can move to the second phase, where restrictions are further loosened to allow socialise in groups of up to 50, permit non-essential travel, and reopen schools and gyms, allow elective surgery.

After again meeting the gating criteria, states can move to the third phase, which will allow vulnerable people to resume public activities, drop workplace restrictions to allow full staffing and permit sports and other such events with limited physical distancing requirements.