It would be illogical to claim that the Chinese leadership intentionally released the Covid-19 virus into the global community. The damage caused to economies on which Chinese companies rely on for their profits and for many their existence is immense, and will have an effect on growth prospects in the People’s Republic of China (PRC) for years.

Given the way bureaucracies function, it is certainly plausible that six weeks went by while the authorities in Hubei sought to put out by themselves the novel coronavirus outbreak that had erupted among its population late last year. The provincial and city governments appear to have gone through a phase of denial of the seriousness of the situation.

Witness the punishment meted out by those self-assumed experts in virology, the police, to the Wuhan doctors who first warned of the danger that was spreading within the local population. This phase lasted for over a month. It took a further few weeks before they accepted that the Covid-19 fire had gone out of control, and that they needed to educate the highest authorities about the severity of the problem.

In Beijing, it would have taken several days before such information travelled up the chain of command to the Chinese Communist Party (CCP) Standing Committee led by General Secretary Xi Jinping. By that time, there was no longer any doubt that a disease at least as deadly as SARS was spreading rapidly across the region.

It was Xi’s January 23 lockdown of Wuhan that showed the world the extent of the danger that the international community was facing. Could information have moved faster up the chain of command in China? Certainly. Could the WHO have sounded the warning bell weeks before it finally did? Absolutely.

Did intelligence agencies in the US and other countries pick up the social media posts of Chinese whistleblowers in Wuhan and warned their heads of governments by early January? But no effective global precautions happened until too late. The Wuhan lockdown and the quarantining of Hubei province got imposed weeks after the virus had spread across China and to the rest of the world in the shape of travellers going from that province to cities across the world.

The WHO first brushed aside the novel coronavirus as no big deal, denying even the possibility of human-to-human transmission even after proof arrived of the opposite, and persisted in declaring travel to and from Wuhan safe. Once the novel coronavirus began to spread, that venerable institution jumped in a flash to the opposite view, that Covid-19 was a bigger threat than even Genghiz Khan had been, and could cause a mass culling of entire populations the way the Black Death in the 1300s and the 1917 influenza epidemic did.

From that time onwards, the WHO pressed forward with its prescription of total lockdown of human activity, a recommendation in which WHO was joined by several world famous individuals such as Bill Gates and almost the entire media. Johns Hopkins and other renowned medical institutions gave doomsday predictions of tens of millions of deaths in billions of potential Covid-19 cases.

Was the initial reaction of the core leadership of the CCP to lock down entire towns and provinces the best course to adopt (and the few countries such as Sweden that are refusing to follow suit, and suspend all activities, seem to be having about the same level of incidence as others who accepted the WHO’s prescription)? That is a question answerable only after accurate figures get computed of the actual mortality rates of Covid-19.

Some estimates suggest that the large number of asymptomatic and undiscovered cases indicates that the overall mortality death is about the same as that of the seasonal flu. What is obvious is that the WHO issued repeated calls since the end of January for other countries to follow China’s example and lock down all activity and confine populations to their homes. This guidance by the world body has ensured that the US and most major European economies have as a consequence staggered into recession, while many are at the doors of the greatest depression they have ever faced.

In the meantime, the Chinese economy has begun recovering from the effects of Covid-19 and from the countermeasures initially taken by Beijing, and is systematically coming back into full throttle. While President Trump has no good word to say about the WHO (blaming not the entire leadership of that organisation but only the Ethiopian Director-General, a gentleman known to go by any consensus reached by his colleagues), US experts seem to have adopted without question the single-minded WHO playbook of recommending total shutdowns for an indeterminate period.

This to limit the spread of a new disease whose per capita toxicity has yet to be determined accurately. Dr Anthony Fauci in particular is among the US “Shutdown Fundamentalists”, and almost daily warns in public about the disastrous consequences he foresees of any lockdown relaxation for most of this year at least.

Not being an economist, Dr Fauci may be forgiven for not taking into account in his health prescription the manner in which US companies, jobs and the economy in general have been affected by the lockdown measures he favours. Of course, “to save lives in the millions”, despite the doomsday predictions made by numerous “expert” institutions (such as the Imperial College about Spain) having been shown to be completely wrong.

The launch of the 2017 Trade War between Washington and Beijing brought into full view what had since the close of the 1990s been the case. The USSR and the US entered into a “fight to the finish” superpower rivalry soon after Harry Truman became President of the US. During and after his time, Europhiles in the State Department and Russophobes in the Pentagon were given control over policy. 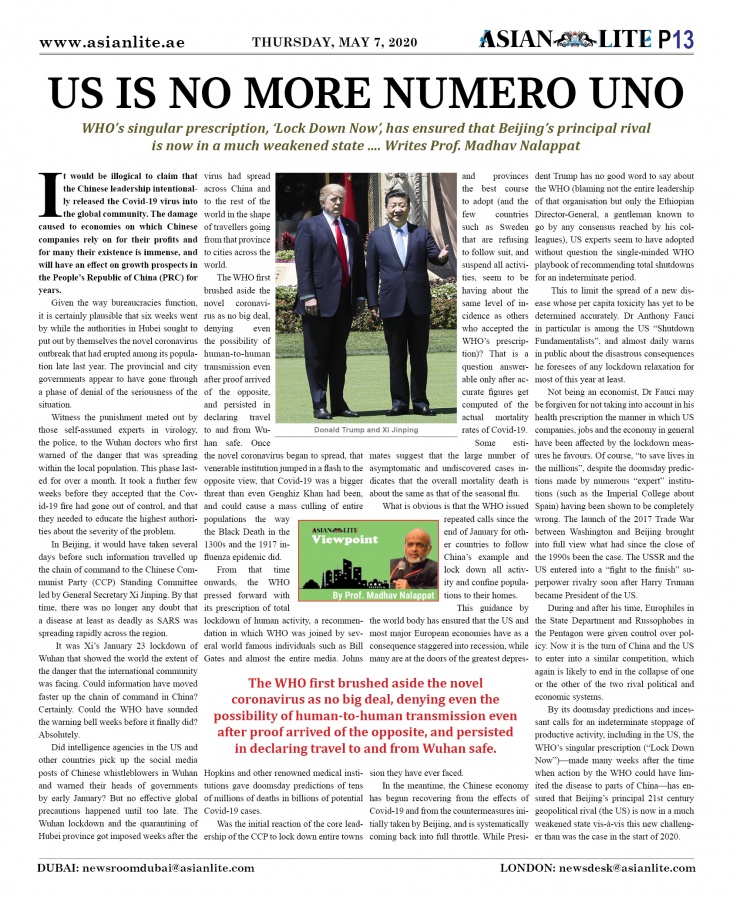 Now it is the turn of China and the US to enter into a similar competition, which again is likely to end in the collapse of one or the other of the two rival political and economic systems. By its doomsday predictions and incessant calls for an indeterminate stoppage of productive activity, including in the US, the WHO’s singular prescription (“Lock Down Now”)—made many weeks after the time when action by the WHO could have limited the disease to parts of China—has ensured that Beijing’s principal 21st century geopolitical rival (the US) is now in a much weakened state vis-à-vis this new challenger than was the case in the start of 2020.