US Secretary of State Mike Pompeo said that conversations with leaders of India and the other Indo-Pacific countries involve “thinking about how we restructure these supply chains to prevent something like this from ever happening again”…. Reports Arul Louis from New York

With nations around the world battered by their dependence on China for vital supplies during the COVID-19 pandemic, US Secretary of State Mike Pompeo has said that Washington was discussing restructuring global supply chains with India and other Indo-Pacific “friends”.

He said at a news conference in Washington on Wednesday that conversations with leaders of India and the other Indo-Pacific countries involve “thinking about how we restructure these supply chains to prevent something like this from ever happening again”.

“One example of our work together is with India. It’s lifted export bans on critical medical supplies, including pharmaceuticals used to treat some COVID-19 patients,” he said.

During the discussions with also Australia, Japan, Vietnam, South Korea and New Zealand, they shared “information and best practices as we begin to move the global economy forward” and “getting our economies back to full strength”, he said.

India, like the US and other countries, has had to import medical supplies for meeting the COVID-19 pandemic that originated in China and spread around the world from there.

The US, in particular, has had to compete with other countries for the dwindling supplies of personal protection equipment (PPE) putting its healthcare workers at risk.

China, meanwhile, has been able to exercise influence through th stranglehold on the essential supplies, while profiting from the rising prices for them.

China opposes any “arbitrary” probe into the origin of coronavirus pandemic that is based on the presumption of its guilt, Vice Foreign Minister Le Yucheng said.

“This is an arbitrary investigation based on the presumption of guilt. That is what we firmly oppose,” Efe news reported on Thursday citing Le as saying.

“We support professional exchanges between scientists. What we oppose, however, is unfounded charges against China. One should not accuse China first and then run so-called international investigations just to make up the evidence.”

He made the comments on Tuesday in an exclusive interview with NBC News aired on Wednesday.

The comments come after US President Donald Trump said his administration was conducting “serious investigations” into Beijing’s handling of the coronavirus outbreak, that was first reported in Wuhan last December, and suggesting he would seek damages for Washington.

Trump has also lashed out at the World Health Organization, calling it “literally a pipe organ for China”.

However, Le said he would not object to scientific investigations into the virus’ origins but questioned why this probe was targeting only China and not other countries “with rapid spread and surge of confirmed and fatal cases”.

“We oppose the politically-driven investigation to stigmatize China.”

He said the virus was a natural disaster and “China is a victim” and sought to assure that the measures adopted by China to contain the outbreak were “open, transparent and responsible”.

“We did not cover up anything, and did not delay any efforts,” he said.

He called Trump’s call for reparations over coronavirus an “unreasonable and legally unfounded” which is “not different from blackmail”.

“The intention is nothing but shifting blame to China for the inadequate response of someone else. Blame game finds little support, and ends up nowhere.”

Beijing and Washington have, in recent weeks, exchanged accusations over the origin of the virus.

In an interview with Fox News, US Secretary of State Mike Pompeo said that Chinese authorities knew about the virus before they made the information public.

Le said it was unfortunate that some politicians were politicizing the issue.

“This is not something we want to see. Under the current circumstances, it is the time for solidarity, for working together to combat the virus and tide over the difficulties. It is not a time for accusation and political manipulation.”

The Chinese official said experts have widely confirmed that the virus “has a natural origin, and is not artificially synthesized”.

Citing the WHO, Le said the source of the virus was still unknown “but all the available data suggest an animal source, and hence it cannot be developed in a lab”.

He reiterated that China had informed the global health body about the virus on January 3 and on January 12 the country shared genome sequencing of the coronavirus that has been critical for diagnosis, treatment, and vaccine development.

“We put Wuhan, a city of over 10 million people, under quarantine. That was an important decision that was unseen before in our history. The US government should have become fully aware of the severity of the issue. If it were anything less serious, how could we lock down an entire city?” Le asked. 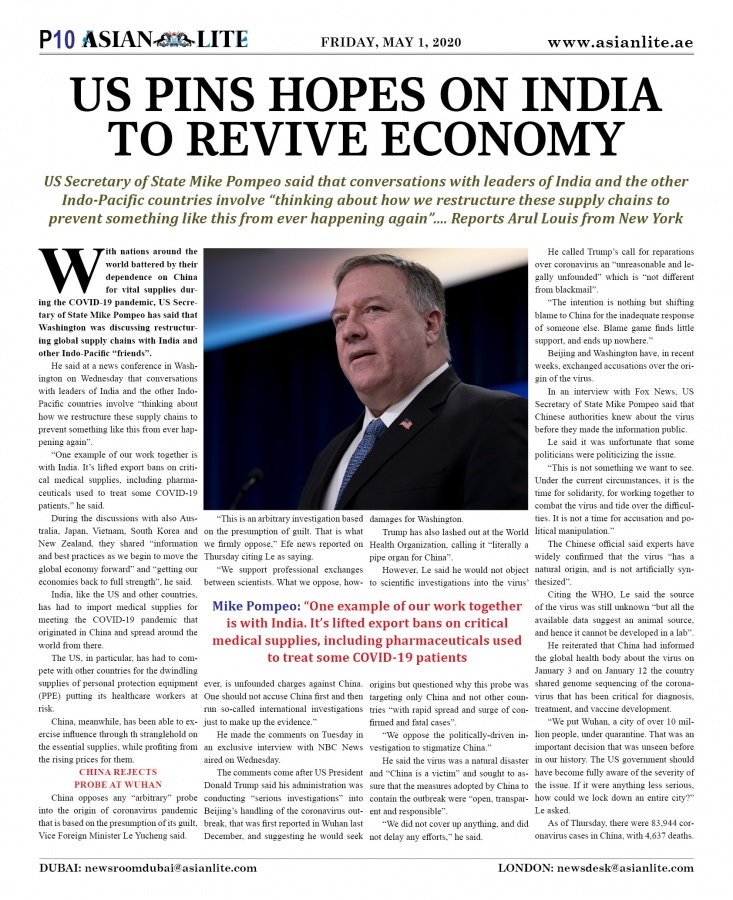