‘Swadeshi’ is no longer just the creed of the Swadeshi Jagran Manch that has been lobbying for Indian products since its inception, but increasingly seem to be a ground reality where both the ruling BJP and its ideological mentor RSS seem to have come on the same page, in assessing the post Covid-19 world order and market behaviour.

While the SJM’s demand for going Swadeshi undoubtedly had the backing of the RSS all along, the Sangh itself hasn’t made it so brazenly clear, at least till the pandemic hit India. Recently in a video press conference meant to address exclusively the foreign media operating in India, RSS Joint General Secretary Dattatreya Hosabale said that self-reliance and Swadeshi would be the new reality not just for India but for all countries in the post-pandemic world.

At least on two occasions, Prime Minister Narendra Modi has vehemently stressed the need for “self-sustenance”, a marked departure from his image of being the brain behind one of the first and biggest investor summits in India – “Vibrant Gujarat”, during his time as Chief Minister of the state.

Government sources say that this doesn’t mean the government is looking for replacing everything foreign but increasingly looking to support Indian businesses, particularly the MSME sector. Another key Minister, Nitin Gadkari has already voiced an urgent need for a special economic package for the sector. Many believe he wasn’t speaking in his personal capacity. 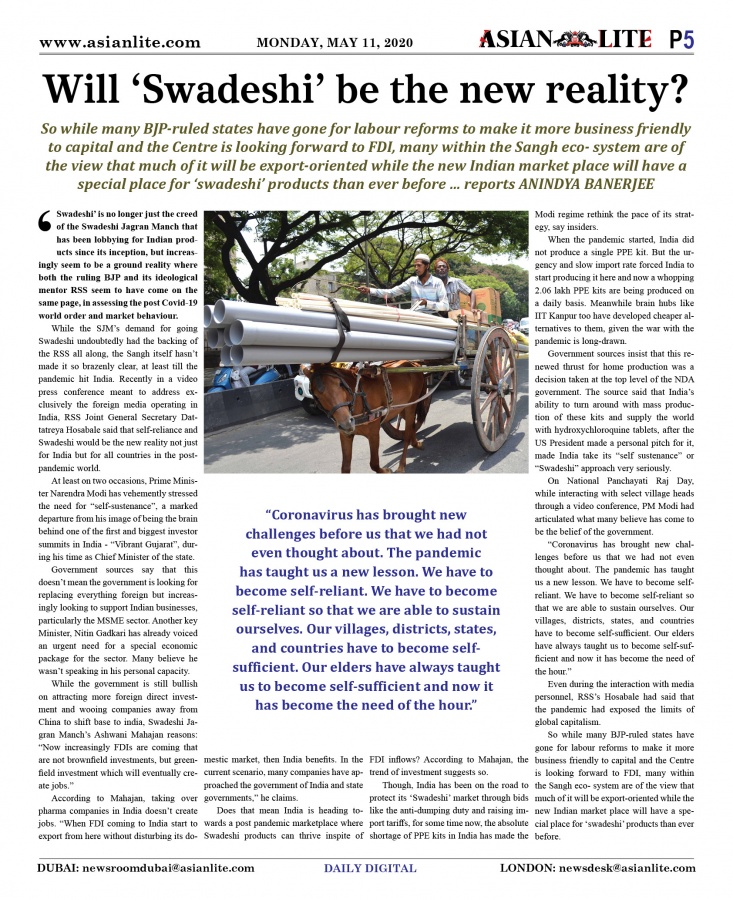 While the government is still bullish on attracting more foreign direct investment and wooing companies away from China to shift base to india, Swadeshi Jagran Manch’s Ashwani Mahajan reasons: “Now increasingly FDIs are coming that are not brownfield investments, but greenfield investment which will eventually create jobs.”

According to Mahajan, taking over pharma companies in India doesn’t create jobs. “When FDI coming to India start to export from here without disturbing its domestic market, then India benefits. In the current scenario, many companies have approached the government of India and state governments,” he claims.

Does that mean India is heading towards a post pandemic marketplace where Swadeshi products can thrive inspite of FDI inflows? According to Mahajan, the trend of investment suggests so.

Though, India has been on the road to protect its ‘Swadeshi’ market through bids like the anti-dumping duty and raising import tariffs, for some time now, the absolute shortage of PPE kits in India has made the Modi regime rethink the pace of its strategy, say insiders.

When the pandemic started, India did not produce a single PPE kit. But the urgency and slow import rate forced India to start producing it here and now a whopping 2.06 lakh PPE kits are being produced on a daily basis. Meanwhile brain hubs like IIT Kanpur too have developed cheaper alternatives to them, given the war with the pandemic is long-drawn.

Government sources insist that this renewed thrust for home production was a decision taken at the top level of the NDA government. The source said that India’s ability to turn around with mass production of these kits and supply the world with hydroxychloroquine tablets, after the US President made a personal pitch for it, made India take its “self sustenance” or “Swadeshi” approach very seriously.

On National Panchayati Raj Day, while interacting with select village heads through a video conference, PM Modi had articulated what many believe has come to be the belief of the government.

Even during the interaction with media personnel, RSS’s Hosabale had said that the pandemic had exposed the limits of global capitalism.

So while many BJP-ruled states have gone for labour reforms to make it more business friendly to capital and the Centre is looking forward to FDI, many within the Sangh eco- system are of the view that much of it will be export-oriented while the new Indian market place will have a special place for ‘swadeshi’ products than ever before.