According to Rector Fr. Patricio Fernandes of the Bom Jesus Basilica, the 17th-century church which houses it, the casket is in a state of disrepair and according to experts, could disintegrate, if it is not restored with the next 10 years.

“The casket will be sent to Italy for repairs. Expert Italian restoration artists have already inspected it. They said it would take a year to restore the casket. They have agreed to do it free of cost, but we have to transport it to Italy and collect it when it is done,” Fernandes told IANS.

Built by local Goa artisans in collaboration with European artists in 1637, the casket is made of pure silver mounted on wood and lined with cloth.

The Basilica is also recognised as a United Nations Education Scientific and Cultural Organisation (UNESCO) world heritage site and is one of the most prominent on the itineraries of the several million tourists and devotees who visit the state annually. 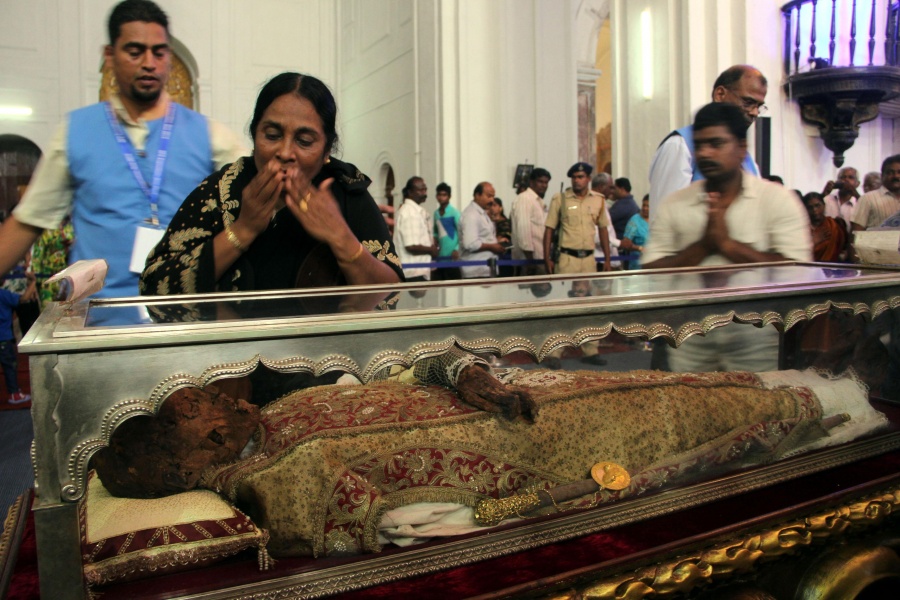 Born in Navarro vilage in Spain’s Basque region, St Francis Xavier is regarded as the patron saint of Goa by the state’s Catholics, who account for around 26 per cent of the state’s 1.5 million population. He is also associated with recommending the Inquisition in Goa

After the saint died off China in 1552 at the age of 46 and was later made a saint, his remains eventually arrived in Goa and have been stored in the specially-made casket since.

The relics rest in the casket, until once every decade, they are moved to a glass encased display cabinet during the Exposition ceremony for public veneration.

The ornate casket, Fernandes said, had suffered wear and tear and had not been repaired since it was built.

“The Italian experts have told us that the casket is severely damaged due to its age and non-repairs and if it is not restored within ten years, it will disintegrate and would be beyond repair,” Fernandes said, adding that the relics would remain at the Goa Church, when the casket is sent to Italy for repairs.

Fernandes said, that he had sought help from the state BJP-led coalition government for assistance in transporting the casket to Italy for repairs and its passage back to Goa.

BJP Rajya Sabha MP Vinay Tendulkar who visited the Basilica last week, said that the three BJP MPs from Goa as well as the state government would pursue Fernandes’ official request to facilitate the repair work.

“We have been requested (by Fr. Ferandes). Transporting the casket to Italy and bringing it back will require funds and permissions. We will try to get it done,” Tendulkar, a former state BJP President, said.