Bibi is defiant. Israeli Prime Minister Benjamin Netanyahu has confirmed his plans to annex parts of the occupied West Bank in the coming months, ignoring the growing condemnations by key allies. The aggressive move taking place in the backdrop of the pandemic draw flak from the US and other close allies.

The US administration is also concerned about the Jewish state’s close ties with China. President Donald Trump want to punish China for its alleged cover up of Covid-19 which claimed 100,000 plus Americans.

Netanyahu said that his country will not miss “the historic opportunity” to annex a portion of occupied West Bank.

Speaking during a meeting of lawmakers of his right-wing Likud party, Netanyahu said the annexation is “a top task” for the new unity government he had formed with his former rival Benny Gantz last week.

Netanyahu told the lawmakers that “there’s a historic opportunity that hasn’t existed since 1948” to impose Israeli sovereignty in the West Bank’s Jordan Valley “in a wise way and as a diplomatic step”.

“We will not let this opportunity pass,” he said.

He said he was determined to start cabinet discussions over the plan on July 1.

The Palestinians consider the annexation as illegal and the European Union warned the move will harm chances for peace, with some of its member states calling to impose sanctions on Israel should it continue with the plan.

President Mahmoud Abbas said last week that the Palestinian Authority is no longer committed to any signed agreements with Israel or the US.

On May 7, US Ambassador to Israel David Friedman said that American President Donald Trump’s administration supports Israel’s application of sovereignty over the Jordan Valley and the settlements in the occupied West Bank and East Jerusalem.

Israel seized the West Bank, along with the Gaza Strip, in 1967 war and kept controlling it ever since despite international criticism. More than 600,000 Jews live in about 140 settlements in the West Bank and East Jerusalem.

The Palestinians, with wide international backing, seek the entire West Bank as the heartland of a future independent state. Annexing large chunks of this territory would all but destroy the faint remaining hopes of a two-state solution.

With Trump’s re-election prospects uncertain this November, Israeli hard-liners have urged Netanyahu to move ahead with annexation quickly.

Joe Biden, the presumptive Democratic nominee in the US presidential elections, recently said that annexation would “choke off” hopes for a two-state solution.

The EU’s foreign policy chief, Josep Borrell, has said annexation would violate international law and vowed to use “all our diplomatic capacities” to stop it.

The Palestinians last week cut off security ties, a valuable tool in a shared struggled against Islamic militants, with Israel to protest the annexation plan.

Saudi Arabia, an influential Arab country that maintains behind-the-scenes relations with Israel, announced its “rejection of the Israeli measures and plans to annex Palestinian lands.”

The Arab League has condemned it as a “war crime,” and both Jordan and Egypt, the only two Arab countries at peace with Israel, have harshly criticized it.

Israel captured the West Bank in the 1967 Middle East war. It has settled nearly 500,000 Jewish settlers in the territory, but never formally claimed it as an Israeli territory due to stiff international opposition. But the US President Donald Trump administration has taken a much softer line toward Israeli settlements than its predecessors. Trump’s Mideast team is dominated by advisers with close ties to the settlements, and his plan, unveiled in January, envisions leaving some 30% of the territory under permanent Israeli control while giving the Palestinians expanded autonomy in the rest of the area. The Palestinians have rejected the plan, saying it is unfairly biased toward Israel. 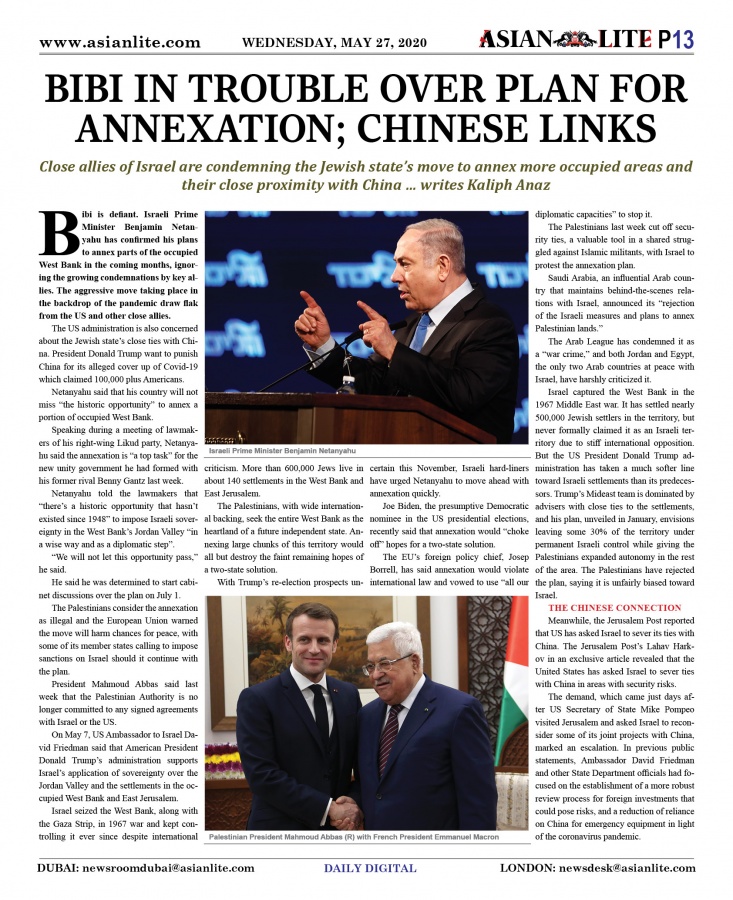 The demand, which came just days after US Secretary of State Mike Pompeo visited Jerusalem and asked Israel to reconsider some of its joint projects with China, marked an escalation. In previous public statements, Ambassador David Friedman and other State Department officials had focused on the establishment of a more robust review process for foreign investments that could pose risks, and a reduction of reliance on China for emergency equipment in light of the coronavirus pandemic.

“But now, the Trump administration seems to be asking Israel to take concrete steps that could jeopardize ties between Jerusalem and Beijing,” the Post reported.

Chinese companies are operating in Israel today in deals reaching more than $20 billion and more is on the way. Jerusalem has gone so far as to even allow Chinese companies that do business in Iran to compete for major infrastructure projects in the State of Israel, the Post said.

The US is upset with China over the cover up of the epidemic and it wants the Communist state to pay a price. The best way to do that is to hurt its pocket and to get American allies like Israel to reconsider their trade and joint infrastructure projects with China.

The other issue is the fear from Chinese espionage. Back in 2000, after the cancellation of the planned sale of the Phalcon AWACS China, Israel made a decision not to sell Beijing any military equipment. It was a decision based on an ultimatum that if Israel continued selling weaponry to China it would lose American support.

Israel’s government now includes two former chiefs of staff – Gabi Ashkenazi and Benny Gantz – who more than others, understand the importance of Israel-US ties.  The US and Israel share some of the most sensitive intelligence with one another. In addition, American defense contractors sell Israel some of the most classified military hardware and weapons in the US like the F-35 fifth-generation stealth fighter jet.

The US is concerned that with China building most of Israel’s infrastructure – roads, trains, tunnels, ports and more – it will eventually gain access to the lines of communication through which Israel and the US communicate intelligence with one another. That is something that Washington will not tolerate.

Also Read – Netanyahu to move forward with annexation in July