I run training programs in creative thinking and global leadership. I have also developed a global methodology known as “Walking backwards from imagination” which is highly effective and highly appreciated by our clients worldwide. We train the participants in our programs on how to be creative leaders. One of our key methods is to train the workshop participants on how to imagine and write a press release at a future date, when the innovation that they are developing today will be ready for release in the market, say 6 months from today. It is a most powerful tool for distilling, clarifying, and focusing on what outcomes are desired, and to work backwards from the picture that they imagine in the future dated PR that they write at start of the project…writes ROBINDER NATH SACHDEV

Your column today will apply the above technique to the upcoming Trump visit to India and imagine what could be the maximum impact headlines in American and Indian media on February 26, 2020. The headline, and press release of the future, now follow as below.

US President Donald Trump yesterday flew back from his maiden visit to India, and has left a trail which was high on optics, but which has also left experts and pundits scrambling to decode the picture of a game-changing vision, commitment, and potential impact of a US-India partnership deal in the 21st century that he has swung with India.

Some observers are commenting that if the vision and commitment as promised by both leaders during his visit takes real legs then it could be even more transformative than the 1979 visit of Deng to the United States that set a blistering pace for US-China business over last 40 years with double digit growth for China, along with concurrent benefits for America Inc., American consumers, and uplifted hundreds of millions from poverty in China.

The first glimpse of surprising nature of outcome of Trump’s discussions with India’s Prime Minister Narendra Modi was revealed when Modi made his welcome remarks at the joint press conference with Trump. Modi said, “India recognizes the logic and potential of a true and trusting partnership with the United States. Our deep and close ally partnership will not only result in wealth creation and jobs in our both countries but will also bring immense benefits to the world order of the 21st century. I am pleased to announce that the United States and India have today decided to partner in an Axis of Goodness for the good of our both people, brothers, and sisters, in the United States, India, and with all countries, and peoples on this planet Earth that is our home in this journey of life. I also say with firm belief and all command that this new era of US-India relations will not cast any iota of cloud on India’s relations with the world community and our friends and neighbours”.

In response to remarks from Modi, Trump said “My visit to India was long overdue. Melania and I have thoroughly enjoyed and imbibed the colours and culture of your beautiful country in these last two days. As the oldest democracy on this planet, United States has been a beacon of free will, entrepreneurship, and pursuit of life, liberty, and happiness. I am glad to be here today with you all, the largest democracy on this planet, and with my good friend Narendra Modi. We have had very good discussions and mutual agreements on the way forward for US-India relations in the 21st century. You will soon learn of these details from our offices. We have today agreed on a roadmap of US-India relations in the 21st century. This roadmap will deliver huge gains of trillions of dollars and millions of jobs for both the United States and India. This roadmap will also deliver some early returns e including it will lower the costs of prescription drugs in the United States by over 20% by 2022. We have also today agreed on a method that will significantly open the world’s largest democracy of over 1.3 billion people with market reforms and improved protection of Intellectual Property so that our great American companies and Indian talent can together create products, and solutions not only for the people in the US and India, but also to help solve global challenges. I am very pleased to today announce an Axis of Goodness for the 21st Century between the United States and India”.

The opening statements by both leaders were very surprising for the press corps in the audience, and questions flew in rapid fire, but were restricted to only a few as both leaders had to head for a dinner reception in honour of Trump, hosted by the President of India.

However, what has been gathered by various second-level information from officials in India, and the press corps accompanying the US President, it is learnt that Prime Minister Modi has offered major reform in policies, availability of infrastructure, and Indian manpower, to plug-in and help the challenges in the US economy, including big ticket Indian investments in the United States, lowering costs for pharmaceuticals and medical care in the US, and a grand solution to solving the problem of nuclear waste in the United States. Modi is also reported to have guaranteed Trump a 3-year window of major reform in India that will be conducive to large scale investments from the United States, that will accommodate all concerns of IPR and free market access e to be timed with the FTA between the United States and India.

In exchange, and in a deal with Modi, sources say that Trump has agreed that the US government will create an all enabling environment for corporate American investment of US$ 100 billion, including funds and guarantees from US EXIM Bank, and another US$ 10 billion by American R&D labs in India, by 2022. The pilot of this new-era US-India partnership will be focused on the pharmaceutical, technology, and the automotive sector, in next few years, according to informed sources in the know. 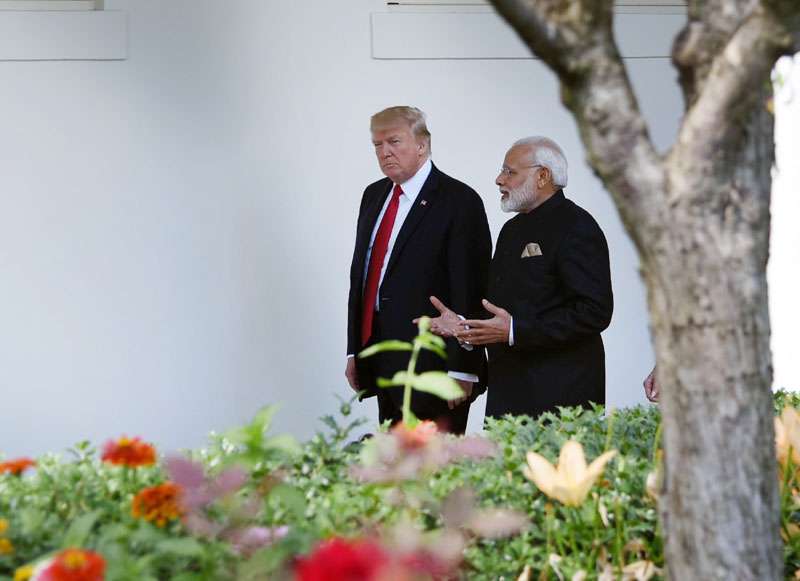 While the announcement of Axis of Goodness and its win-win idea for India and the United States relations is a total newbie, even the optics of Trump visit to India had some twists. Trump was accorded a huge welcome in Ahmedabad, full of colours, and millions of people, and then headed to a romantic evening with Melania as the sun set at the Taj Mahal, the world monument of love.

The pictures of Donald and Melania, on a decorated elephant in India can be visuals that historians of centuries ahead will cite when they write the story of US-India relations of the 21st century.