The seeds of war between the United States and China are germinating across the Taiwan straits and in newly created atolls of the South China Sea. In Ladakh and in Sikkim, the Peoples Liberation Army (PLA) has accelerated its “Forward Policy”, the same line of action once followed by Prime Minister Jawaharlal Nehru and Defence Minister Krishna Menon.

They acted in the belief that the other side would never have the will to go to war against a systematic nibbling away of territory through “aggressive forward patrolling” by the military. The slowing down of the Indian economy since the close of 2016 and the antics of GHQ Rawalpindi may have persuaded the generals in Chengdu that their adoption of the forward policy would have no reciprocal blowback.

B.N. Mullick of the IB had calculated that Mao’s difficulties with the Chinese Communist Party leadership and the economic pain China was then enduring would prevent the PLA from responding to the strategy of nibbling away at territory, a few feet at a time. He was wrong. And after what is taking place in Ladakh and Sikkim, the PLA leadership may be in for a surprise. An armed push to a depth of four to five kilometres in two parts of the Sino-Indian border is unacceptable, and may—unlike Doklam—lead to a conflict involving casualties. The Chinese side appears to be placing its faith in the serial (some would say deliberate) errors made by the Lutyens Zone. This network has thus far succeeded in stalling a robust defence and security understanding between India and the US, which is the only other power that can match China. Key elements of progress in this inevitable alliance are trapped through bureaucratic obstruction in a netherworld.

The greatest favour that Vladimir Putin can give to Xi Jinping is to keep India from entering into a substantive military alliance with the US. In the past, Pakistan was able to fashion a close alliance with both Beijing and Washington from a time when both capitals were hostile to the other. Once the US and China became de facto allies in 1972, Rawalpindi was in ecstasy. Fortunately for India, that longstanding PLA favourite, GHQ Rawalpindi, has never succeeded in first separating Kashmir from the Union of India and subsequently doing the same with other bits and pieces of our country.

It was D.P. Dhar’s masterstroke—the treaty between the USSR and India—which ensured that China (despite intense prodding by Henry Kissinger) kept out of the 1971 joint operation between the Mukti Bahini and the Indian armed forces to liberate East Bengalis from genocide. Similar insurance against a conflict with China is needed now, this time from Washington rather than Moscow.

Pakistan cannot any more recover its stability as a unitary state. The Pashtun community suffers from an artificial and cruel division formalised by the Durand Line through a treaty that long back passed its date of expiration. A unified Pashtun state comprising of territory on both sides of the now defunct Durand Line needs to be created with Peshawar as the capital, while the rest of Afghanistan could be constituted into a federation with Kabul as the capital. Within Pakistan, GHQ oppression in Sindh, Balochistan and Pashtunistan needs to end, and in order to help ensure this, India needs to help form an international coalition to assist such oppressed nationalities to secure freedom from oppression by the Pakistan army Substantive assistance to the suffering people of Pakistan cannot be accomplished by India acting in isolation. Instead, New Delhi must form part of an international coalition that would unite to oppose the post-colonial colonialism practised within Pakistan and in PoK by GHQ Rawalpindi. Such a coalition must ensure for itself primacy over the waters of the Indo-Pacific, which to this columnist  has always meant the entirety of the Pacific and Indian Oceans.

The Quadrilateral Alliance (Tokyo, Delhi, Canberra and Washington) would be the core of a new Indo-Pacific Defence and security alliance. The Quad needs to announce the 21st century Indo-Pacific Charter. This would guarantee security to all democracies in the Indo-Pacific, as also to affiliated powers facing the menace of intervention by hostile forces. It would assure freedom of trade and navigation within the waters of the Indo-Pacific. The signing could take place not in any of the four capitals but in Colombo, the capital of Sri Lanka, a country that needs to be brought into the Indo-Pacific security grid in view of its strategic potential.

Prime Minister Modi needs to prevail over the prevarications of the Lutyens Zone and formalise a Quadrilateral Alliance that does not merely remain a photo-op. Next, the alliance should announce the Indo-Pacific Charter, which in the 21st century will play the same role as the Atlantic Charter did in the 20th. The aim is to protect smaller states as well as keep the two superpowers from going to war against each other. The catastrophic risk of a war between the superpowers was once between Moscow and Washington but now it is between Washington and Beijing. Across the Himalayas, across the Taiwan straits and in the South China Sea are being sown seeds of tension that must not be allowed to grow into conflict that will involve the two current superpowers—China and the US—and two future superpowers, Russia and India. It is obvious that Russia will be on the side of China, thanks in part to the successful sabotage by the Atlanticists of President Donald Trump’s pre-election geopolitical strategy of shifting priorities from the Atlantic to the Indo-Pacific. If it is equally certain that India will be on the US side in such a conflict and vice-versa, a conflict between China and India or war between the US and China can be averted. 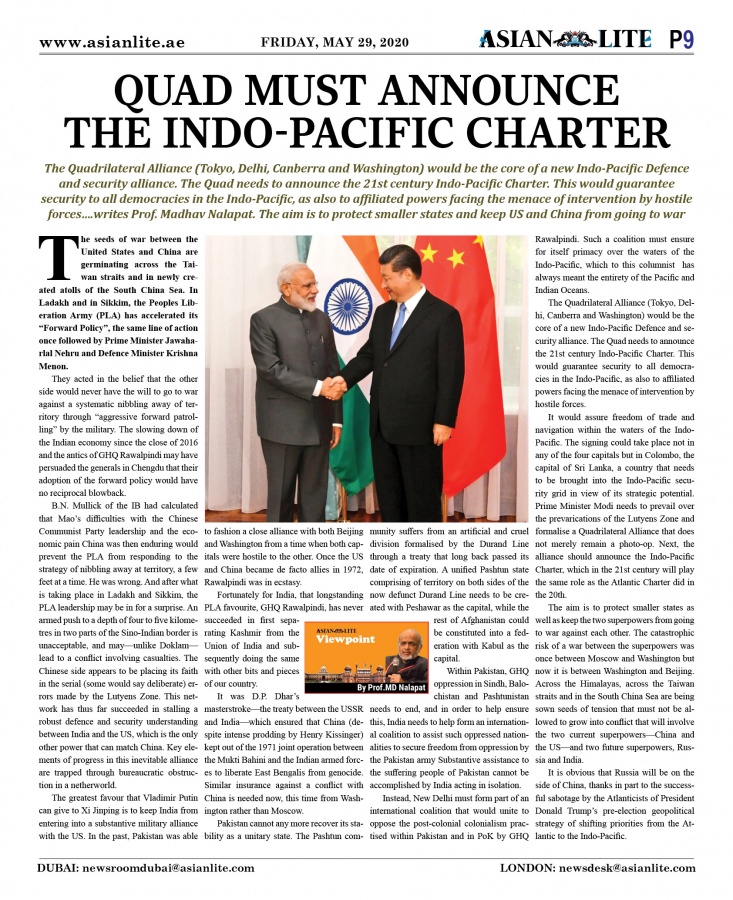 US Is No More Numero Uno