The quest for Democratic nomination is now confined to two white men, Biden, 77, and Sanders, 78, all the women, except Gabbard, and non-whites having left the race…reports Arul Louis from New York 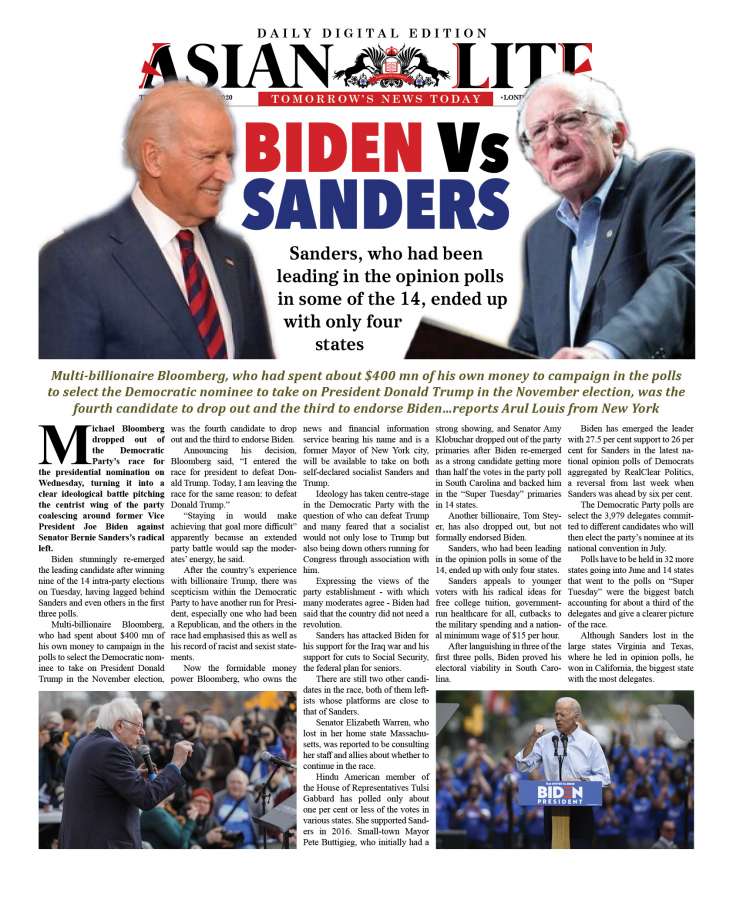 Warren, who is from the party’s left wing and performed poorly in the primaries – the intra-party elections – to select the candidate to confront President Donald Trump in the November election, announced on Thursday in front of her house in Massachusetts that she leaving the race but was not ready as yet to endorse either Sanders or Biden.

She said that she was going to continue to fight for the middle class “as smartly and effectively as I can.”

The ideological consolidation that is taking place in the party around Biden at the ideological centre and Sanders on left “wasn’t right” as it left no room for others, she said.

Of the candidates who have shown up nationally, only Hindu American member of the House of Representatives Tulsi Gabbard remains in the race, although she has polled around one per cent or less of the votes in the 18 states where the party polls have been held.

She is a leftist and was Sanders’s supporter in 2016.

The quest for Democratic nomination is now confined to two white men, Biden, 77, and Sanders, 78, all the women, except Gabbard, and non-whites having left the race.

Senator Kamala Harris, who is of Indian and Jamaican African descent, showed early promise and fared well in party debates but quit in December even before the party polls got underway.

Biden, who performed poorly in the first two party polls leading to questions about his viability, made a stunning comeback after the primary in South Carolina and the 14 on Tuesday, winning ten of them.

Sanders was shown ahead of him in national polls and in many of the 14 states, won only in four states.

Warren lost even in her home state of Massachusetts.

Many in the Democratic Party establishment and moderates fear that if Sanders were to be the party candidate in November he might lose because of his self-declaration that he is a socialist and also take down Congressional candidates belonging to the party.

Warren has accused Sanders of telling her that a woman does not have a chance of winning the presidential election and both clashed publicly over this.

Hillary Clinton was the first woman presidential candidate of a major party in 2016, but lost to Trump.

Warren has toned down some of her left-oriented stands, declaring herself a “capitalist” and backing down on proposals for a government monopoly on healthcare by offering a role for private insurers.