In a victory for universities and foreign students, President Donald Trump’s administration has dropped its order to deny visa status to those taking only online cases because of the COVID-19 pandemic.

Federal Judge Allison Burroughs said on Tuesday that the government agreed to rescind the rule that would have required foreign students on F-1 or M-1 visas to leave the US or transfer to another university if they cannot take at least some in-person courses. Those staying on could have faced deportation.

The judge made the announcement about the government backtracking during an emergency hearing asked by the two institutions that was held by teleconference and lasted only a few minutes.

The case was brought in the federal court in Boston by the Massachusetts Institute of Technology and Harvard University on July 8 and it had snowballed with scores of colleges and tech companies backing them in court briefs and 18 state attorneys general filing another case against the order.

The Trump administration’s order issued last week reversed another issued in March that permitted students to take all their courses online because of the national COVID-19 emergency — which still continues.

Many universities, including Harvard, have announced plans to conduct only online classes in the Fall semester starting in August or September, while some like Columbia and Yale plan to offer a hybrid programme that combines online and in-person teaching if local authorities permit classroom attendance.

The administration’s order against online only teaching seemed to be a tactic to force educational institutions to comply with Trump’s agenda to open the nation fully before the November election.

When the case was filed, Harvard President Larry Summers said, “It appears that it was designed purposefully to place pressure on colleges and universities to open their on-campus classrooms for in-person instruction this fall, without regard to concerns for the health and safety of students, instructors, and others.”

At least two other cases against the government’s order are pending before other federal courts: One is by Johns Hopkins University in Washington and the other is by the University of California in San Francisco.

Harvard and Yale said in court documents that although it may be argued that the students can continue their studies online from their home countries, “they may have their research and learning inhibited by time zone variations, unavailable, unreliable or state-managed Internet connections, and other barriers to online learning”.

They said that students can suffer irreparable harm from the order if they are forced out of the country.

Tech companies, including Google, Microsoft and Facebook said in their brief that “America’s future competitiveness depends on attracting and retaining talented international students”.

According to the International Institute of Education, there are over one million foreign students in the US and of them about 200,00 are from India. 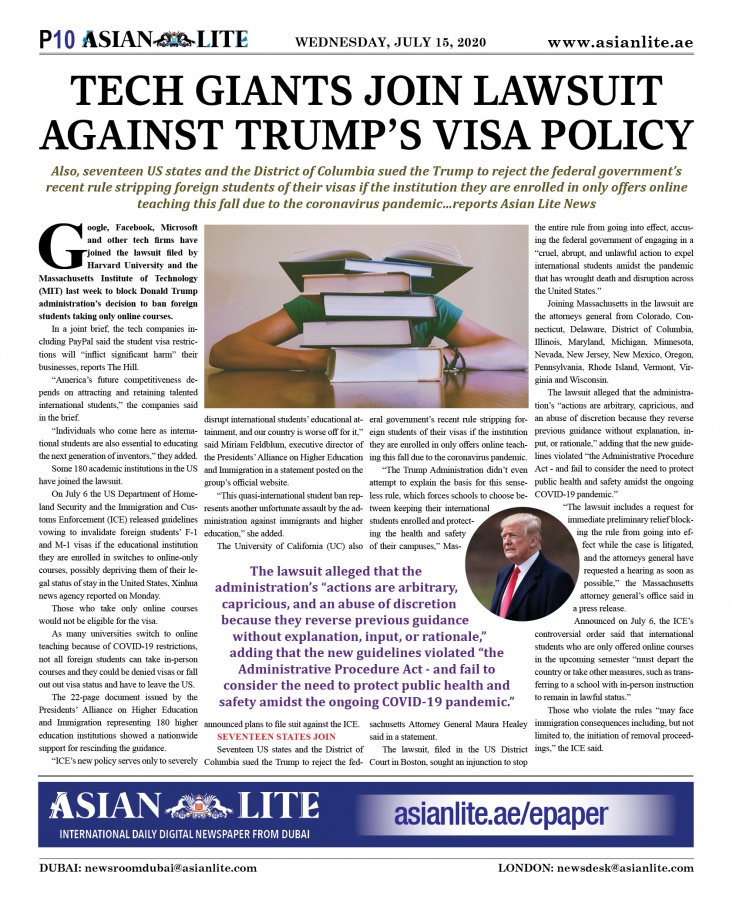 several US institutions are dependent on tuition from foreign students, many of whom pay full fees.

But another factor of importance to both the universities and the economy is the pre-ponderance of graduate students in engineering and science.

Foreigners make up over 75 per cent of graduate students in electrical, computer, petroleum and industrial engineering fields, according to Inside Higher Ed.

They not only back up the faculty as teaching assistants and researchers, but go on to work for or found tech companies.