After Donald Trump threatened Twitter with big action that can come in the form of an executive order soon, Twitter CEO Jack Dorsey on Thursday defended the fact checking action against Trump tweets.

Dorsey said the micro-blogging platform would continue to point out incorrect or disputed information about elections globally.

“Fact check: there is someone ultimately accountable for our actions as a company, and that’s me. Please leave our employees out of this. We’ll continue to point out incorrect or disputed information about elections globally. And we will admit to and own any mistakes we make,” tweeted Dorsey.

His comment came after Trump advisor Kellyanne Conway targeted Twitter’s head of site integrity, Yoel Roth, on Fox News after finding some older tweets from him that were critical of Trump and the US administration.

“Somebody in San Francisco go wake him up and tell him he’s about to get a lot more followers,” Conway was quoted as saying.

Trump supporters shared screenshots of old Roth tweets on social media, slamming him all over.

The Twitter CEO said the action on Trump’s tweets does not make them an “arbiter of truth”, referring to Facebook CEO Mark Zuckerberg who jumped into the fray, criticising Twitter for flagging tweets by Trump.

“Our intention is to connect the dots of conflicting statements and show the information in dispute so people can judge for themselves. More transparency from us is critical so folks can clearly see the why behind our actions,” Dorsey stressed.

Twitter Safety said that action against Trump’s tweets about California’s vote-by-mail plans is part of efforts to enforce the civic integrity policy.

“We believe those Tweets could confuse voters about what they need to do to receive a ballot and participate in the election process,” said Twitter Safety.

Dorsey said that as per the civic integrity policy, Trump tweets “may mislead people into thinking they don’t need to register to get a ballot (only registered voters receive ballots)”.

“We’re updating the link on @realDonaldTrump’s tweet to make this more clear”, he said. 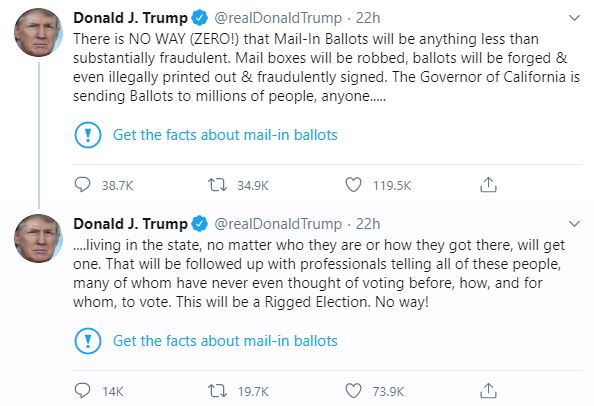 Trump, meanwhile, has announced retaliation is coming in the form of an executive order against the social media companies.

“Stay Tuned!!!” Trump tweeted to his more than 80 million followers on the platform.

Trump has warned social media giants that his government could “strongly regulate” or “close them down” after Twitter fact-checked one of his tweets for the first time.

Criticising Twitter for flagging tweets by Trump, Facebook CEO Mark Zuckerberg has said that social media companies should not be the arbiter of truth.

In an interview with Fox News, Zuckerberg called out his social media rival, saying Twitter should not be fact-checking Trump.

“I just believe strongly that Facebook shouldn’t be the arbiter of truth of everything that people say online,” he told the interviewer.

“We have a different policy than Twitter on this. Private companies probably shouldn’t be, especially these platform companies, shouldn’t be in the position of doing that,” he added.

“In general, I think a government choosing to censor a platform because they’re worried about censorship doesn’t exactly strike me as the right reflex,” said the Facebook CEO.

After Twitter flagged his tweets for fact check, Trump threatened to “strongly regulate” or close down social media companies that attempt to “silence conservative voices”.

Meanwhile, The Verge reported that The White House set its sights on a single Twitter employee after the company attached a fact-checking link to president’s tweets “containing lies and misinformation related to voter fraud”.

Trump advisor Kellyanne Conway targeted Twitter’s head of site integrity, Yoel Roth, on Fox News after finding some tweets that were critical of Trump and the US administration.

“Somebody in San Francisco go wake him up and tell him he’s about to get a lot more followers,” Conway was quoted as saying.

Trump supporters shared screenshots of some Roth tweets on social media, slamming him.

Twitter said: “No one person at Twitter is responsible for our policies or enforcement actions, and it’s unfortunate to see individual employees targeted for company decisions”.

It was the first time Twitter fact-checked Trump’s tweets.

“Twitter has now shown that everything we have been saying about them (and their other compatriots) is correct. Big action to follow!” Trump tweeted.

Before threatening the microblogging platform, Trump also accused Twitter of “interfering in the 2020 Presidential Election”.

“They are saying my statement on Mail-In Ballots, which will lead to massive corruption and fraud, is incorrect, based on fact-checking by Fake News CNN and the Amazon Washington Post,” he said.