London-born dreaded terrorist Omar Sheikh will be released soon after spending 18 years in jail. Pakistan is not new to the “Arrest, Protect, and Release at an opportune time” policy. There is an opportunity in his release also, which has been timed with Masood Azhar and Hafiz Saeed coming on the FATF radar, Pakistan needs Omar Sheikh to fill in… writes Safath Abdul Khader

The Sindh High Court overturned the verdict of the death penalty for Ahmed Omar Saeed Sheikh on grounds of lack of evidence. The sentence was given for seven years, actually allowed him to walk out free.  A life was lost, brutally taken away and no one is responsible.

The court has recorded a lack of evidence to conclude that Sheikh was the murderer, but, why then, was he convicted of murder in the first instance. Sources available online indicate that by October 2003 Pakistani authorities had apparently nailed down the actual murderer as Khalid Sheikh Muhammad, but that didn’t instigate them, to revisit Omar Sheikh’s sentencing earlier.

Daniel Pearl was perhaps just one life …one pawn on the chessboard of geo politics and maybe the Pawn had to be sacrificed to leave the game open.  But each time an act of barbarity gets overlooked, the perpetrators arrive at a new tolerance level

Apparently, Khalid Sheikh Muhammad confessed to FBI agents that he personally slit Daniel’s throat and severed his head, because he wanted blood on his hands, in case the Americans did find him and jail him for 9/11. As if the blood of the 3000 plus Americans killed in 9/11 wasn’t enough blood already.

The fact remains that for his involvement in 9/11, Khalid Sheikh Muhammad was certain of immunity from prosecution in Daniel Pearl’s murder. It made sense to use the opportunity to save his comrade. The entire show was to protect Omar Sheikh, who had been bartered for IC 814 passengers. It wouldn’t be prudent to give him up for an inconvenient reporter. He needed to be shielded. There was an opportunity in the arrest of Omar Sheikh.

There is an opportunity in his release also, which has been timed with Masood Azhar and Hafiz Saeed coming on the FATF radar, Pakistan needs Omar Sheikh to fill in. Pakistan is not new to the “Arrest, Protect, and Release at an opportune time” policy. Mullah Ghani Baradar’s arrest in 2010, was Pakistan’s guarantee to a role in the peace negotiations whenever they occurred. A more recent example is that of Hafiz Saeed.

The conviction & trial of Omar Sheikh was staged with a purpose. There are ample inconsistencies in the investigation to indicate that the motive was never to find the culprit. The presence and involvement of Pakistan’s ISI from the abduction, to the exhumation of Pearl’s body and surrender of Omar Sheikh, is in itself a huge pointer.

A key witness to the abduction and murder; Fazal Kareem, randomly walked up to the Pakistan Police and showed them where Daniel Pearl’s dismembered body was buried. And then he vanished. No charges were levelled against him, no leads were followed. In fact, US officials were even denied access to him. None of the guards who kept Pearl in custody was prosecuted when a minimum charge of abetment was in order. The closed trial, though Omar’s father attended, obviated any possibility of any scrutiny of the legal process involved in Omar Sheikh’s conviction.

There is a reason why Pakistan is called the most dangerous country in the world for journalists to work, because of the sheer convenience with which inconvenient elements can be eliminated

These lapses were covered up, with confusing and differing accounts of how the abduction and the subsequent killing unfolded. Details of how many days Daniel Pearl was in captivity, the exact date of his execution couldn’t be corroborated, despite the presence of multiple witnesses. And, while the police were floundering in their search for Omar, circling his extended family for leads, his father and uncle were not in their purview. But, when the time came his father knew exactly where to find Omar and to fix up a meeting.

Omar Sheikh was wanted by the US. A request for his extradition was pending with the Government of Pakistan. But it was imperative for Pakistan to protect Omar. Omar Sheikh’s uncle Rauf Sheikh was a judge in Punjab. There was a certain ease with which he could be protected and a farce of the conviction still be maintained.

In a case of this magnitude and interest to the US, it is strange that key findings were hidden from them. Circumstances of Sheikh’s surrender are thus, shrouded in mystery. Omar surrendered on 5th of February 2002, but to the Home Secretary of Punjab, Ejaz Shah, an ex ISI officer and Omar stayed in his custody for 7 days thereafter, wherein he was briefed by the ISI, before finally surrendering to the Lahore police on 12th February. 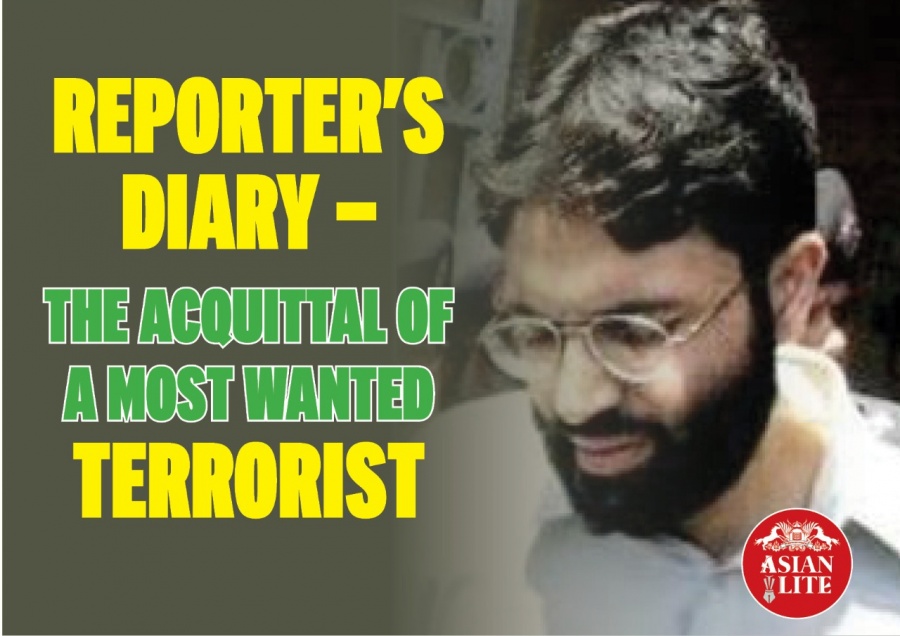 Omar’s acquittal is premised on the assessment that Omar Sheikh was not in town at the time of the murder and hence not the executioner, also doesn’t hold water. It was stated that he took a PIA flight out of town using an alias “ Muzaffar.”  But if he was actually out of town or even planning this as an alibi, he would have used his real name. The pretext of Omar not being in town on the day of the murder,  was an afterthought.

There is a reason why Pakistan is called the most dangerous country in the world for journalists to work, because of the sheer convenience with which inconvenient elements can be eliminated. Daniel Pearl, was searching for Richard Reid’s handler in Pakistan and he had traced the email address to which Richard Reid had emailed, when he was baited and abducted. Pearl’s work in Karachi also comprised investigating leakages of nuclear secret by scientists to militant groups and the linkages, between ISI and extremist groups. He was clearly becoming inconvenient. Just like, Syed Saleem Shahzad who was investigating the attack on Mehran base when he had to be abducted and killed by the ISI. In a report released in December 2010, the US department has admitted that extra judicial killings are a problem in Pakistan.

The temptation to portray Omar Sheikh as a poster boy, a genius gone awry needs to be resisted, social support for the transition of a chess champion at LSE to the militant training in Afghanistan, preparing to take lives cannot be condoned. Ample studies on the issue of radicalization have concluded that radical behaviour once manifest, fosters the psychological need to repeat the offence.  Omar Sheikh is rabidly radical, and signs of his propensity for violence were visible from an early age. His violent responses, in beating up a school teacher or frequent expulsions for fighting and beating up of classmates should have been behavioural red flags. In the words of his friends at school, at the age of twelve, “Omar got into a fracas with a kid from the other school and held him up against the wall by his neck.”

At age fifteen, he was already concerned about the plight of the Muslims in other countries, he spent time watching snuff videos. He was a repeat offender who believed that Muslims are being oppressed by the west and there is a need to stop them. This need was given a direction in the militant training camps in Afghanistan by the ISI who cultivated him from a very young age. Omar Sheikh joined Harkat ul Mujahideen and carried forward the ISI agenda.

Like Osama bin laden had prophesized– the network will keep coalescing, new ideologies shall keep coming up and continuing the attacks.

He was persistent in his pursuit of hostages, Bela Nuss (1994), and then Daniel Pearl (2002). In fact, using hostages as a bargaining chip was an early lesson for Omar Sheikh. IC814 was a classic example of how governments could be brought to the negotiating table if the stakes were high enough.

Daniel Pearl’s murder is also instructive of the elaborate network of militant groups in Pakistan and the degree of operational linkages they share. The entire operation had participants from Lashkar e Jhangvi, Harkat ul Mujahideen, Al Qaeda, Jaish e Muhammad, Sipah e Sahaba, Harkat ul Jihad al Islami, 313 Brigade. The presence of Pakistan police members amidst these cadres and the facilitation and oversight by Pakistan’s ISI is how the State supports these networks and nudges their operations in directions best suited to Pakistan. Case in point is the demand for the release of a halted shipment of the F-16 fighter jets to the Pakistani Government, in exchange for letting Daniel Pearl go.

The release of the beheading video online. Capturing the last words of Pearl as an appeal to stop the killings of Muslims indicate a clearly thought of the plan. The hatred which would have motivated the need to dismember the body into 12 parts was, in the words of Khalid Sheikh Muhammad ‘tit for tat’ for the American bombings in search of Osama bin Laden,  that killed innocent Muslims.  In his interrogation, Omar Sheikh told the FBI agent  “Daniel Pearl would not be dead if I didn’t do what I did”, “I feel sorry for Pearl’s wife ……what should I do? Give food packets to Mrs Pearl, like the Americans dropped food packets to the Afghan people ?”

Pakistani assets have a history of targeting American interests – 1993 attack at World Trade Center, US embassy in Tanzania 1998, 9/11, Daniel Pearl murder, Richard Reid, David Headley, US troops in Afghanistan. Like Osama bin laden had prophesized– the network will keep coalescing, new ideologies shall keep coming up and continuing the attacks. And yet we are unwilling to admit that Terrorism is a specialized sector in Pakistan that is used as a leverage to cull favours. It funds terror to extract funds for its fight against terror.

The day Daniel Pearl was picked up he had got the approval for a story titled “AFGHANPIE”  “Let’s roll out the old regional map and look at how each of Afghanistan’s neighbours is jockeying for a share of the $ 10 billion reconstruction”.

Daniel Pearl was perhaps just one life …one pawn on the chessboard of geo politics and maybe the Pawn had to be sacrificed to leave the game open.  But each time an act of barbarity gets overlooked, the perpetrators arrive at a new tolerance level. And this standard shall keep getting revised and tested, till such time that this barbarity is no longer acceptable.