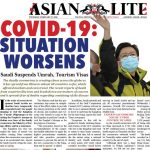 As a knock on effect of the coronavirus outbreak, China is expected to see the largest decline in the quarter-on-quarter GDP in over three decades.

Calling it “2020’s Black Swan”, according to a report by marquee fund house Goldman Sachs, its Asia-Pacific economist, Andrew Tilton expects the largest decline in quarter-on-quarter China GDP in more than three decades.

That said, as with past viral outbreaks, he expects growth to rebound in subsequent quarters, substantially aided by government stimulus.

But he has cautioned that this expected rebound is contingent on the authorities getting the virus largely under control over the next month, and he views the balance of risks to these forecasts as skewed to the downside.

According to Goldman Sachs, heading into 2020, there was no shortage of concerns about the global environment, including elevated tensions with the Middle East and North Korea, a high-stakes election year in the US, and few monetary policy levers left in several major economies to fight the next downturn amid ongoing growth worries.

“But the event that no one expected was the outbreak of COVID-19 that first emerged in the populous city of Wuhan, China, and which is now proving to be both more infectious and virulent than the common flu,” it said.

The report has referred to expert medical opinion from Dr. Barry Bloom, a professor at Harvard University’s T.H. Chan School of Public Health, and Dr. Michael Osterholm, director of the Center for Infectious Disease Research and Policy (CIDRAP) at the University of Minnesota.

“The sense is that this infection will probably spread worldwide…stringent control measures… won’t stop an epidemic, but they will slow it down and ultimately reduce the total number of cases,” Bloom said.

Bloom and Osterholm have agreed that further global spread was likely.

But they also argueed that quarantines and control measures can slow the spread of the virus even if they won’t stop it.

This is important because it buys crucial time for the medical community to prepare for outbreaks and eases acute demand for critical care, which helps healthcare systems from becoming overwhelmed.

“While the case-fatality rate is much lower, the transmission is quite dynamic, and many more people will get it. So comparing this illness with SARS or MERS is not helpful,” Osterholm added.

Both believe the US is unprepared on almost every level — from policy and preparedness coordination across national, state and local levels to the availability of drugs and medical supplies — to deal with any sizeable outbreak today.

China scholar Jude Blanchette of the Center for Strategic and International Studies the recent situation will come at a political cost for Chinese President Xi Jinping.

However, he adds a challenge to his leadership is very unlikely given the amount of power he has amassed as well as the logistical obstacles to such a challenge today.

“I think climbing out of this hole will likely stress the (Chinese) leadership in a way that it hasn’t been stressed since the 1989-1991 period,” Blanchette said.