The Financial Action Task Force has decided to keep Pakistan in the Grey List till June 2020. There are various reasons for the international agency ignoring the actions by Pakistan to clear its name. But officials now reveal that they are expecting more from Pakistan. Like Dawood Ibrahim Kasker, the mastermind in 1993 Mumbai blasts, ISI is accused of protecting Sri Lankan terrorist Mohamed Munas Muwath, 25, a key player in the 2019 Easter bomb blasts.  The protection extended to Muwath in the port city of Karachi and the similarity of Colombo blasts with the 1993 Mumbai attacks are reasserting the ISI role in the bombings ….. writes Kaliph Anaz

The Financial Action Task Force will ask Pakistan to extradite wanted criminals to India and Sri Lanka as part of their conditions to lift the country from the grey list, sources close to the forum told Asian Lite.

Officials based in Paris said Dawood Ibrahim Kaskar, the brain behind the 1993 Mumbai blasts, and Mohamed Munas Muwath, 25, are living in Karachi under the protection of Pakistani officials and its intelligence arm ISI. The presence of Muwath in Karachi exposing the Pakistani link with Sri Lankan Easter bomb blasts that killed 259 people and injured 1000 plus people. The Mumbai blasts at 12 locations, the pattern later imitated by Muwath and his Jihadi friends, claimed 317 people and maimed over 1500.

Mumbai – 1:30 p.m. on 12 March 1993, Friday: A powerful car bomb exploded in the basement of the Bombay Stock Exchange building near Fountain in central Mumbai. The 28-storey office building was severely damaged and many nearby office buildings also suffered damage. About 30 minutes later, another car bomb exploded in front of the Mandvi branch of Corporation Bank near Masjid. From 1:30 p.m. to 3:40 p.m. a total of 12 bombs exploded throughout Mumbai. Most of the bombs were car bombs but some were in scooters. Three hotels – the Hotel Sea Rock, Hotel Juhu Centaur, and Hotel Airport Centaur – were targeted by suitcase bombs left in rooms booked by the perpetrators. Banks, the regional passport office, the Air India Building near Marine Drive, and a major shopping complex were also hit. Bombs exploded at Zaveri Bazaar and opposite it a jeep-bomb exploded at the Century Bazaar. A double-decker bus was very badly damaged in the deadliest explosion near Worli, with as many as 90 people killed.

Colombo -8.25 pm on 21 April 2019, Easter Sunday. Three churches and three luxury hotels in the commercial capital were targeted in a series of coordinated suicide bombings. Later that day, there were smaller explosions at a housing complex in Dematagoda and a guest house in Dehiwala. Two hundred and fifty-nine people were killed, including at least 45 foreign nationals. Sri Lanka named nine people who staged the bombings

Police said that two of the luxury hotels were bombed by two brothers from a wealthy Colombo family involved in spice exports. The group of Islamists had used one bomber at each of the locations hit, except at Shangri-La hotel where there were two suicide explosions. 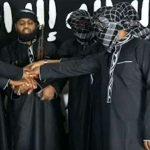 One of the Shangri-La bombers was Zahran Hashim, the leader of the local jihadist group responsible for the audacious attacks that were claimed by the Islamic State group. Hashim headed the National Thowheeth Jama’ath (NTJ) which has since been banned. He attacked the Shangri-La in the company of fellow Islamist Ilham Ahmed Mohamed Ibrahim. Ilham’s elder brother Inshaf Ahmed was the man who bombed the nearby Cinnamon Grand hotel.

Reliable sources reveal that Muwath, 25, was being kept under Pak ISI’s protection in Karachi. They said Muwath is a key associate of Zahran Hashim, who is named by Sri Lankan security agencies as mastermind of the Easter attacks.

While studying in the Madrassa, Muwath was spotted and recruited by Pak ISI, sources said. He was subsequently indoctrinated into terror ideology and was sent for a 3-months long terror training course in one of the ISI facilities.

The protection extended to Muwath and the similarity to the 1993 Mumbai attacks are reasserting the ISI role in the serial bombings in Mumbai, the commercial capital of India, and Colombo, the commercial capital of Sri Lanka. In both cases, the bombers targeted crowded public places like hotels and churches.  Despite Pakistan’s affirmation that it was no longer supporting terrorism on its soil, ground reality remains starkly different.

Local Sri Lankan security agencies, together with assistance from international partners, mostly from US and Australia, have led to detention of over 100 suspects along with large tranche of mobile phones, laptops etc. Several Sri Lankan nationals based in the Gulf, either directly or indirectly involved in the attacks, have been identified and some of these individuals have also been deported back to Sri Lanka.

Reliable sources reveal that Muwath, 25, was being kept under Pak ISI’s protection in Karachi. Muwath is a key associate of local Sri Lankan radical Islamic cleric Zahran Hashim, who is named by Sri Lankan security agencies as mastermind of the Easter attacks.

Muwath hails from Warakopala in Sabaragamwa province in Sri Lanka and pursued religious theology in Islahiyah Arabic College in Madampe. Later, he went to Pakistan for further studies in Binoria Madrassa in Karachi. Binoria Madrassa is known to have close links with Taliban and other Pak terror organizations. Jaish-e-Mohammed Chief Maulana Masood Azhar had studied and later taught in the same Madrassa. This is also a recruitment ground for ISI as the madrassa hosts a large number of foreign students.

While studying in the Madrassa, Muwath was spotted and recruited by Pak ISI, sources said. He was subsequently indoctrinated into terror ideology and was sent for a 3-months long terror training course in one of the ISI facilities. Pak ISI tasked Muwath to establish a terror module in Sri Lanka in line with their long term strategy of establishing a strong base in the country.

Muwath was frequently traveling between Pak and Sri Lanka in this regard. In his last visit to Sri Lanka (June 13-Sept 19, 2018), Muwath attended an indoctrination programme conducted by Zaharan Hashim in Hambantota area.

Muwath is related to Hajjul Akbar, former leader of Sri Lanka Jammath Islam (SLJI), and his brother Mohamed Ibrahim a.k.a. Ibrahim Moldavia, presently in custody of Sri Lankan police in connection with vandalizing of religious statues in Mawanella area in December 2018. Muwath is also associated with two sons of Ibrahim Moldavia namely Sadiq Haq and Shaid Haq, who are also in custody for being close to Zaharan Hashim, the ring leader of the Easter bombers.

Despite close relations, Pakistan authorities have not yet informed Sri Lankan government regarding the presence of Mohamed Munas Muwath in their country. On the contrary, after the attacks, he has been kept under close custody of Pak ISI and is not being allowed to travel within or out of Pakistan.