Nepal never had any objection over India constructing a road till the Lipulekh pass in Uttrakahand to ensure smooth ride of pilgrims to Kailash Mansarovar, Indian Army Chief General Manoj Mukund Naravane said on Friday on Kathmandu’s recent displeasure over the development at the border. He, however, pointed out that if Nepal is raising the issue, it is doing so at ‘someone else’s behest’.

Naravane said there has never been an issue about road at the tri-junction — India-China-Nepal. Nepal has started protesting after India opened a road till Lipulekh pass on May 8.

The Indian Army Chief did not name China, but he hinted that Beijing was the only interested party to it.

The assertion was made by Naravane during a discussion on “Covid and Indian Army: Responses and Beyond” at the Manohar Parrikar Institute for Defence Studies and Analyses in Delhi.

It was Vice Admiral Sekhar Sinha (retd) who asked why was Nepal protesting on “our road” across Lipulekh and why had it decided to set up a border post at the spot.

To this, the Army Chief said, “We have made a road west of the Kali river. Nepal has accepted that its territory is to the east of Kali river. There has never been an issue about the tri-junction.”

He also pointed out that there was no connection between the face-offs and any other events.

The Army Chief also stressed upon the use of technology. He said the rate of change in technology will drive the battle field.

“Because of technology, we will have to shift from man power intensive to technology intensive, there could be 10 to 15 per cent reduction in manpower,” he pointed out.

The officer further stressed that humans will be needed to take the tactical decision.

On being asked about two-front challenges, he said it is now “two-front plus half in counter terrorism and add another half for Covid”.

Naravane said that both the fronts will not be 100 per cent active. “There will be a priority front and a secondary front, the latter will be kept as dormant. Two fronts would not be just military offensive but a diplomatic effort too,” he said.

On joint commands coming up in the future, the Army Chief pointed out that the integrated air defence command would be up soon.

“It would be followed by maritime command. Then the Army is looking at the Western theatre and the Northern theatre… We have had a couple of brain storming sessions and the matters are being dealt as per operational necessity to suit our peculiar requirements,” said the Army Chief.

Talking about Integrated Battle Groups (IBG), Naravane said that it’s based on very clear operational imperatives. “It will not cause any change to operational readiness or reduce combat potential. It is an idea whose time has come due to better weapons, improved mobility and communication,” he said.

On the Covid-19 crisis in India and whether it has impacted the force, the Army Chief said none of the Army units in operational areas in Northern Command and Eastern Command has reported a positive case.

“This is because at the borders, we are free from any interaction with the outside population,” said the officer.

Talking about budget problems, he candidly said that no cuts will be imposed at the cost of operational efficiency or readiness.

“There will be budgetary constraints, but how much we cannot say,” said the officer, adding that areas have been identified for budget saving. 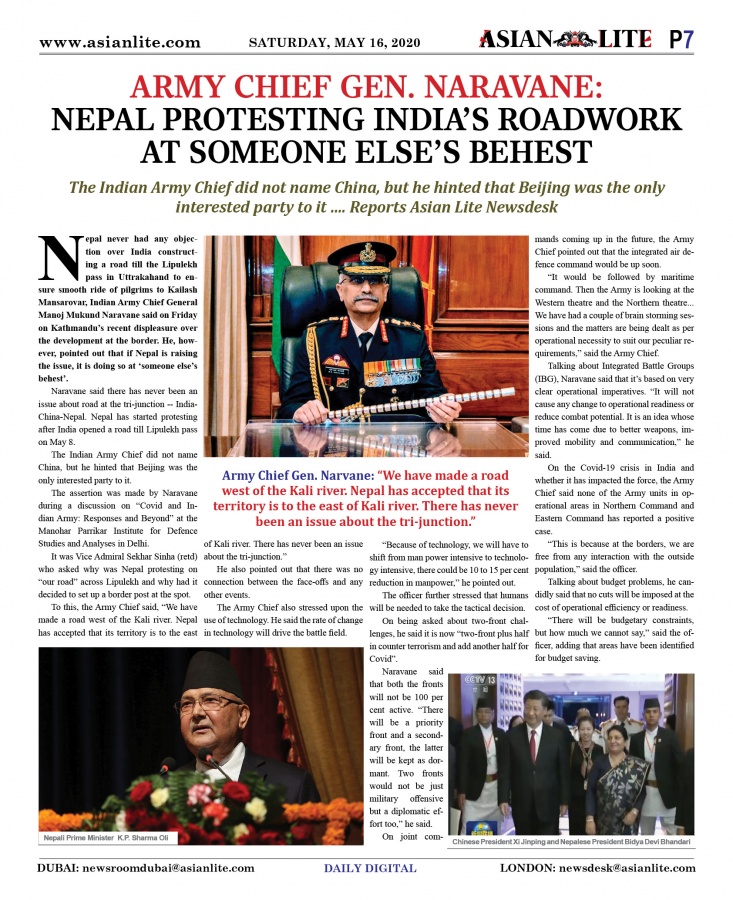