India has called the terror attacks against innocent civilians, including women and children in Afghanistan “crimes against humanity” and sought accountability of the perpetrators and sponsors terrorism.

In a formal condemnation issued by the Ministry of External Affairs, the India government called the terror attacks on the Dasht-e-Barchi hospital maternity ward, funeral in Nangarhar province and the Army check post in Laghman province, barbaric.

“Such reprehensible attacks, including on mothers, newly born children, nurses and mourning families are appalling and constitute crimes against humanity,” the government said.

The India government called for an immediate cessation of terrorism in Afghanistan in strong words, saying that terrorists should be forced to evict “safe havens and sanctuaries that have abetted terrorism in the region for decades and caused immense miseries to untold number of people in the region.”

The US Department of State condemns in the strongest terms the “two horrific terrorist attacks” in Afghanistan today, a statement said.

“In an unconscionable assault, gunmen seized one of Kabul’s busiest hospitals, which housed a maternity ward run by Doctors Without Borders. In the hospital, the terrorists took the lives of at least 13 innocent people, including newborn babies, new mothers, and health care workers,” the US statement said. 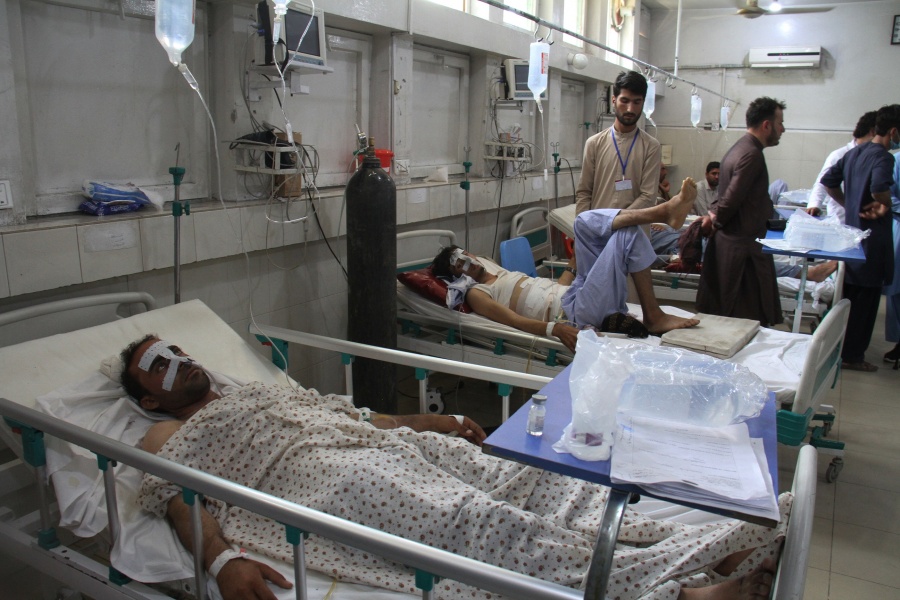 The statement said any attack on innocents is “unforgivable”, but to attack infants and women in labor in the sanctuary of a hospital is “an act of sheer evil.”

The statement also said that in the eastern province of Nangarhar, a suicide bomber attacked the funeral of a local police commander, “leaving at least 26 people dead and more than 68 wounded.”

“Terrorists who attack mourners lining up for prayer at a funeral are only seeking to tear apart the bonds that hold families and communities together, but they will never succeed. Our thoughts are with the victims and their families of both attacks, as well as the brave Afghan security forces who defended against the terrorists,” it said.

During the holy month of Ramadan and amidst the threat of COVID-19, these dual attacks are particularly appalling, according to the statement.

“The Afghan people deserve a future free from terror, and the ongoing peace process continues to present a critical opportunity for Afghans to come together to build a united front against the menace of terrorism,” it added.

The Ministry of Foreign Affairs expressed the Kingdom of Saudi Arabia’s strong condemnation of the two attacks in Kabul and Nangarhar province in Afghanistan.

The Ministry affirmed the Kingdom’s solidarity with Afghanistan and “against extremism, violence, and terrorism.”

Pakistan’s Foreign Ministry said: “These terrorist acts are particularly despicable as they take place in the holy month of Ramadan and at a time when Afghanistan is grappling with Covid-19 pandemic.”

The attack began with explosions and gunfire near a maternity hospital in the Dasht-e-Barchi area of PD13 in western Kabul on Tuesday morning, said residents, and Afghan security forces, including special forces, responded to the incident. The Ministry of Interior announced the attack was over with all attackers killed after five hours of fighting.

According to the Ministry of Interior, there were four suicide attackers in military uniforms that stormed the hospital and all were killed.

The Ministry of Interior said that at least 14 civilians were killed, including two newborn babies, and fifteen others were wounded in the clash.

The Afghan forces rescued more than 40 people from the medical clinic in Kabul, said Tariq Arian, a spokesman for the Ministry of Interior.

At least 24 people were killed and almost 70 others were wounded in a bombing at a funeral in the eastern province of Nangarhar on Tuesday, local officials confirmed.

Eyewitnesses said that explosion happened in a crowd of people who were gathered for the funeral of Shaikh Akram, a former commander of public uprising forces, in Shewa district.

Local officials said the casualties may rise as a number of wounded are in critical condition.

No group including the Taliban has claimed responsibility for either attack.

There can be no justification for such continued acts of terrorism, Prime Minister Narendra Modi led government said adding that “the perpetrators of such heinous acts and their sponsors and supporters should be held accountable and brought to justice.”