Renowned legal luminary and Queen’s Counsel Harish Salve said implementing a stimulus package amounting to 10 per cent of GDP on the lines of the UK and US, would not be tough for India. In an exclusive interview to IANS, Salve also stressed on making India a welcoming country for foreign investment, and that the “nit-picking details which suffocate businesses by strangling capital account transactions should perhaps be re-looked”.

Responding to a question on the lending culture of banks, he said there is a general impression that Indian banks have done too much lending and this is simply not true, but that they have done “too much lending to the wrong people and for the wrong reasons”.

Following is the text of the interview.

Question: Stimulus package should be 10% of GDP on the lines of the UK and US. Would it not be tough for India to implement it?

Answer: I do not think it will be tough for India to implement a stimulus. The government of India has access to some of the finest minds in the world of economics and commerce and is in a position to put in place such a stimulus package effortlessly. The present government is politically robust and the Prime Minister has established over and over again his qualities of decisiveness. In such a situation I do not find it difficult for India to evolve and implement a stimulus package.

A: India is the world’s largest English speaking democracy. It has the demographic advantage of a young population, and a large number of educated people are available at wages which compete favourably with the rest of the world. The problems which challenge doing business in India are easy to remedy.

Firstly, the regulatory departments of the government including the tax departments of the Union and the states, have to be made more user-friendly. The recommendation by the young tax officers to increase tax rates at the time where incomes have vanished due to closure of all means business and earning income, establishes the mindset of these departments. India’s economy has been plagued by corruption in financial institutions, and undoubtedly this calls out for urgent repair. But this is not the time to take any measures that make India look like an inhospitable ecosystem to invest in. Land acquisition is vital for sourcing land for industries. And yes labour reforms are also a must. But perhaps this is not the right time for labour reforms when the country is coming out of this difficult situation.

Q: Allowing domestic credit to increase — in the USA it is 187% of GDP, world average is 129% and India’s average is 50% — would work positively for the economy?

A: India has to reconsider the lack of depth in its capital market, and ways in measures of increasing liquidity in the market. There is a general impression that Indian banks have done too much lending – this is simply not true. What the Indian banks have done is too much lending to the wrong people and for the wrong reasons. That is the problem of governance. Government control over public sector banks has proved to be a major factor which has encouraged corruption. While the political environment has cleaned up, there is a lot of work yet to be accomplished at the lower levels to put the banks back on their feet.

Q: What is your reaction to three crucial things to boost the economy ï¿½ bring down the domestic lending rate of interest, repeal FEMA and allow inexpensive foreign funds to India?

A: The domestic lending rates can only be brought down when there is free access to international inexpensive capital. It is my personal view that the Foreign Exchange Management Act has lost all relevance. The current level of foreign exchange balances, and the overall strength of the economy in which interventions by the Reserve Bank can always protect the rupee, should provide sufficient measure of safety. Besides as a sovereign country, control over foreign exchange on a macro level can be reimposed at any time. But the nit-picking details which suffocate businesses by strangling capital account transactions should perhaps be re-looked at this time. And the enforcement directorate officers could be put to more efficient use in doing various other things which are very necessary at this time to get our economy back on track.

Q: Allowing deficit financing and printing money and putting it back into the system, would these measures jump start the economy?

A: That is my view. For example, the RBI has granted a moratorium to flat buyers. The SEBI, on the other hand, has perhaps a good reason, not granting a moratorium to the financial intermediaries in their repayment obligations to mutual funds and banks. In this situation, the intermediaries find themselves in a crunch. At both ends of the spectrum is the common man – the flat buyer and the investor in the mutual fund. The first has to be relieved from an immediate cash obligation to pay, and the second must get his income from the mutual fund. The only solution to this is by the government injecting funds in the middle so that the financial intermediaries and mutual funds can survive this period of time during which their cash flows from their customers can be restored. This example can be multiplied manifold.

A: Agriculture has to be de-romanticised. Land is an economic resource – its status on an emotional plane has to be revisited. Secondly, agriculture has to be made economically viable. Land reforms have reduced the size of agricultural holdings to a point that in the current economic scenario, the land holdings become economic units. Some kind of consolidation is called for. Allowing corporate intervention in the field of agriculture will, on the one hand, relieve the government of its obligation of ensuring that crops are insured and the farmer insulated from the vagaries of the monsoon and other elements and that the farmer gets abundant supply of fertiliser and seeds and all that he needs for an abundant crop. 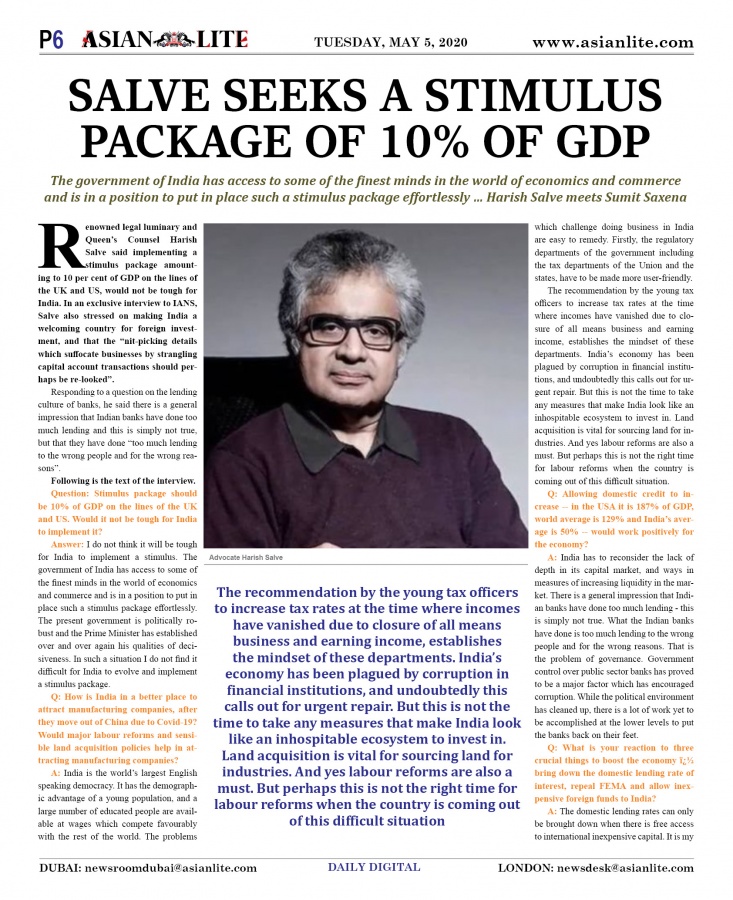 On the other hand, the customer will benefit by getting cheaper agricultural produce and with higher degree of quality control. It will only hurt the middleman – but then the middleman must now find other occupations. Besides all over the world, hypermarkets, markets, and neighbourhood stores and groceries have survived side-by-side ï¿½ each of them fulfilling a specific purpose. This transition has to be made.

Q: There are Covid 19 cases against China by different countries ï¿½ enforcing the judgement will be a matter of concern. Do you think the international justice system is strong enough to pass an order binding on China?

A: As at present, it is very difficult to have any real optimism in the matter of bringing China to account for what it has done. China is an economically and politically powerful nation. The world community is divided and each country would like to do a side deal with China. China, I am sure, has great comfort in the thought that unity in the world in dealing with a problem such as this is extremely unlikely with each country looking out for its own economic interest and political interest in aligning with China.

Q: How can we change laws to avoid repetition of Vodafone case and Nokia case. Would this help in attracting manufacturing companies?

A: This requires a change in mindset, which in turn must be reflected in the manner in which we administer our laws. Improving the ease of doing business by making the regulatory environment more user-friendly is the real solution.

Q: Separate regulation for the banking industry and divorcing it from RBI, what is your reaction on this?

A: I am strongly in favour of creating a banking regulator. The overall economic control over banks will continue with the RBI including the power to free monetary policy. However regulating individual banks in their functioning is something which it is now clear the RBI has neither the resources nor the skills to monitor. Considering the problems we have manifested themselves in Indian banks including the corruption and networking, it is obvious that they need a much closer monitoring and for this purpose, a separate monitoring mechanism through a separate regulator may prove to be advantageous. 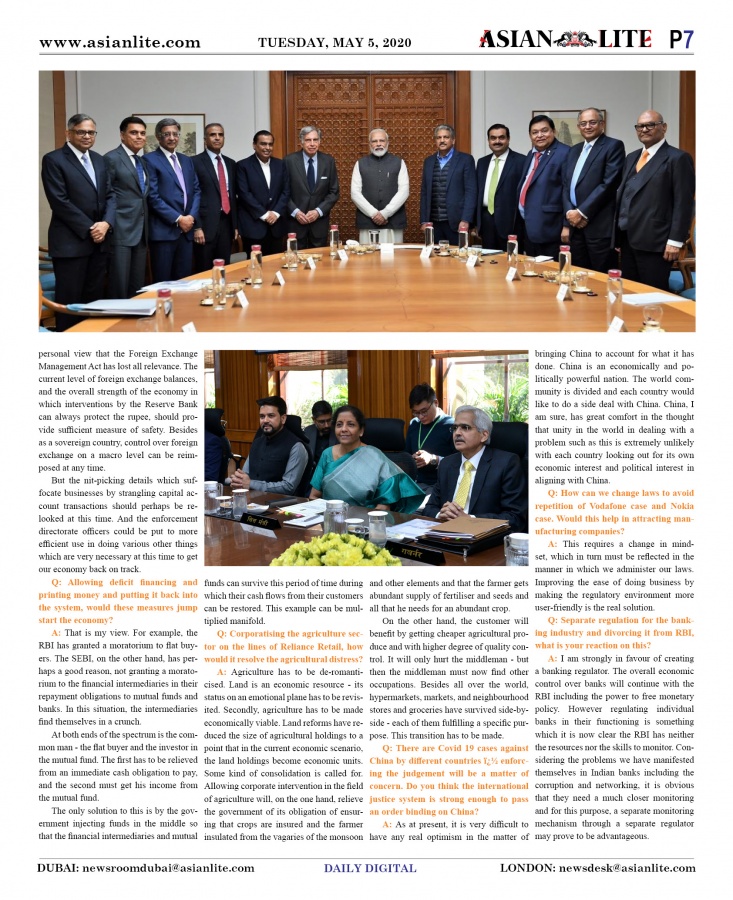