It’s a matter of coincidence that Sheikh Mujibur Rahman’s origins and the descent of the paternal side of my family are from the same sub-division now a district, namely Gopalganj. Sheikh Mujib hailed from Tungipara. My ancestors were based in Ulpur. The distance between the two are a mere 27 kilometres.

On the 25th of March the Pakistani military embarked on a brutal crackdown on Bengalis in East Pakistan. The following day – the 26th of March – Sheikh Mujib declared East Pakistan as independent Bangladesh. In that month of March, if I recall correctly, he uttered the stirring words: “AAMADER DABAYA RAKHTE PARBA NA” or “You cannot suppress us”. He was immediately arrested and whisked away to a prison in West Pakistan. In August and September of 1971, the Pakistani military held a clandestine trial of Sheikh Mujib and sentenced him to death. 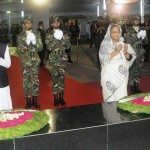 In Sheikh Mujib’s absence, a Bangladesh government was formed, with him as president, but with Syed Nazrul Islam as acting president and Tajuddin Ahmed as prime minister. They operated out of Kolkata. I know the building on Theatre Road, now known as Shakespeare Sarani, in Kolkata, which became the nerve centre of activities of the Bangladesh government-in-waiting. Those were heady days for us in Kolkata.

People of every generation waited and willed victory for fellow Bengalis across the border. Night after night India’s Akashbani radio would broadcast commentary in Bengali to keep people in East Pakistan informed of developments and to keep up their spirits.

When it became imperative that India would have to come to the assistance of the Mukti Bahini – the liberation force of Bangladesh – General Sam Manekshaw, the Indian chief of army staff, advised Indian Prime Minister Indira Gandhi to be patient, so that a campaign against the Pakistani army could be planned impeccably and with a guarantee of success.

In December 1971 the Pakistani air force bombed 11 Indian airbases. This gave India the justification it was looking for to retaliate. Indian armed forces now openly joined hands with the Mukti Bahini. The decisive phase lasted a mere 13 days – from the 3rd of December to the 16th December. 93,000 Pakistani soldiers surrendered to the Indian army.

Under immense international pressure, Pakistan was forced to unconditionally release Sheikh Mujib on the 8th of January 1972. He was flown to London. From here he went to Delhi – where he met Indira Gandhi – before arriving in Dhaka on the 10th of January. I can still visualise the video of countless people greeting him in Dhaka.

The following month, on 6 February to be precise, Sheikh Mujib undertook his first foreign tour as head of Bangladesh’s government. It was to Kolkata. I was among more than one million people at the Brigade Parade Ground to listen to his thundering address.

He continued: “AAMAR DEBAR MOTO KICHU NAI….. ACHE SHUDHU BHALOBASHA, DEELAM SHUDHU TAI.” (“I have nothing much to give you. All I have is affection; and this I give you.”)

Needless to mention, Sheikh Mujib’s assassination in 1975 was an unspeakable crime. It shocked Indians beyond words.

But one thing is certain, with Bangladesh’s GDP growth today at over 8%, as compared to Pakistan’s GDP growth of 3%, the divorce from Pakistan, which Sheikh Mujib spearheaded, stands fully justified.