The ongoing controversy over the killing of a pregnant elephant at the edge of the Silent Valley National Park was further fuelled by a remark of former Union Minister of Environment Maneka Gandhi.

The 15-year-old wild elephant died last month and the post mortem revealed that she was pregnant with a two-month-old foetus.

It was noticed that the upper and lower jaw, tongue and teeth were blown away. Experts said that the elephant had eaten a pineapple filled with firecrackers.

When this incident came to light, reports of a similar incident has taken place in Kollam district last month also surfaced and a probe has also been launched.

Gandhi had gone on record stating that this occurred in Malappuram, a thickly populated Muslim-majority district. But it actually happened in Palakkad district.

The same mistake was also committed by present Minister of Environment, Forest and Climate Change Prakash Javadekar, who also referred to the incident taking place at Malappuram.

Following this, there was an uproar with Kerala Chief Minister Pinarayi Vijayan, Leader of Opposition Ramesh Chennithala and numerous Indian Union Muslim League leaders slamming Gandhi’s remark, alleging it was trying to unnecessarily turn a non-issue into a communal issue.

The latest to join the protests was State CPI-M secretary Kodiyeri Balakrishnan who told the media on Friday that the incident was a very sad one and a probe is going on.

“But, it was totally unacceptable for Gandhi and the present Union Minister to point out that this happened in Malappuram district. This is the agenda of the RSS to communalise the issue and target Malappurram for ulterior motives,” said Balakrishnan.

One of the state’s top elephant expert P.S.Esa, a member of various bodies including the Asian Elephant Specialist Group, IUCN/SSC told IANS that in his close to four-decade-long official career attending to elephants, similar incidents like this have taken place about five times.

“There are two possibilities, one of which is the age-old issue of man-animal conflict and this happens in areas where farming activities take place near the forests. Wild elephants do attack farms and take away products which they like and naturally, the farmers react. At some places, solar electric fences are erected. Another possibility is there are times when poaching takes place, but though one cannot rule that out, generally Kerala does not have many such cases,” said Esa.

Esa pointed out that Kerala has taken giant strides intending to both wild and captive elephants.

According to studies Kerala has about 5700 to 6000 wild elephants, while there are close to 500 captive elephants.

“Reports are there that every year about two per cent of wild elephants dies and a post mortem is done to see if the cause of death is due to contagious diseases. Compared to other states in the country, the Kerala forest department is truly professional and its officers are also passionate about their work,” said Esa. 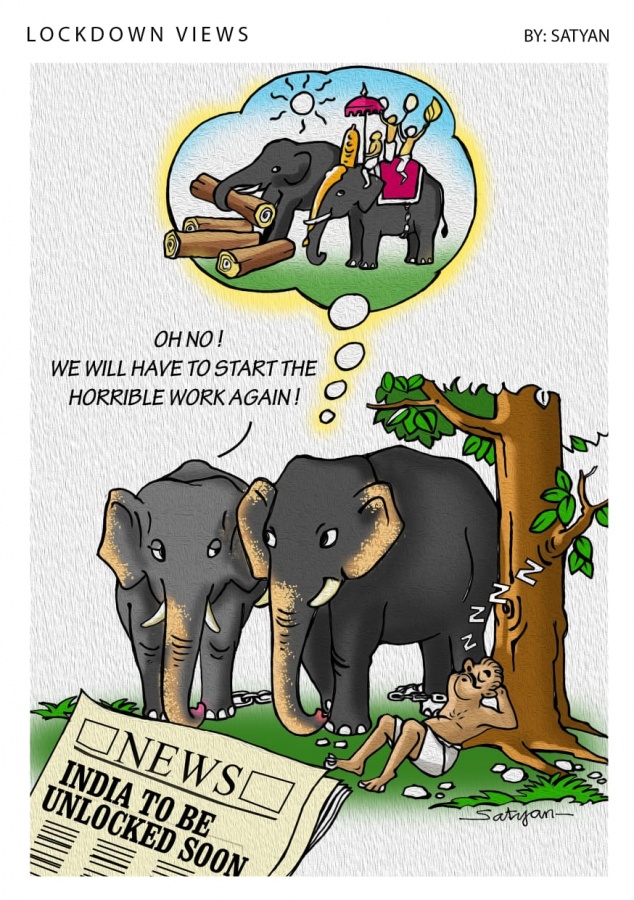 Another expert, elephant veterinarian Jacob Cheeran, said by and large incidents like these would go down as part of the man-animal conflict.

“In my career, I have seen there are two types of conflicts, one when elephants attack the farmers and the other when elephants attack illicit distillers. I have seen this in the forests of North Bengal and this happens in Kerala also. For elephants, illicit liquor wash is a favourite item and when it gets the smell it comes to the place where this is being brewed, chases away the distillers and gets drunk on it,” said Cheeran.

Reacting to the Palakkad incident, State Forests Minister K.Raju said that the first arrest has been made.

“A very good joint probe is going on and it will not end with the arrest of one person, as there are others also involved. All those responsible would be taken to task,” said Raju.

Meanwhile, the lone Keralite BJP leader in the Union Cabinet — State Minister for External Affairs V.Muraleedharan — batted for his colleagues and said the issue is not if it’s Palakkad or Malappuram.