The largest medical forum in Britain slammed a report prepared by the Public Health England on “Disparities in the risk and outcomes of COVID-19”.

The British Association of Physicians of Indian Origin (BAPIO), with over 50,000 medical doctors from South Asia, said the report “turns out to be a ‘damp squib’.

Ahead of the review, many BAME campaigners and leaders were concerned that the review would give insufficient weight to socioeconomic inequalities or structural racism and stress genetic factors, for political convenience, the Guardian reported.

“Whilst we welcome the data that is contained within the 89-page report, some of which is new, we are disappointed that the review committee were unable to meet all the objectives that they had clearly set out, particularly about making recommendations to reduce the disparities we have seen in the disproportionate deaths of BAME people in the community as well as our fellow health and social care workers,” the forum said in a statement.

“At this time of such glaring disparities, BAPIO would have liked a clear way forward so that our communities can live full and healthy lives for the future. I am disappointed that this has not happened with this report,” said Dr Ramesh Mehta, BAPIO President.

“This was an ideal time for such an authoritative government body to improve the lives of the sick and the vulnerable in the BAME communities,” said Dr JS Bamrah, BAPIO Chairman. “The report has failed to give us direction, and therefore it lacks teeth”.

“This is an opportunity lost. We have glaring disproportionality in deaths of BAME people, which is obvious even in this report,” said Prof Parag Singhal, BAPIO Secretary. “It’s another nail in the coffin of equality and transparency unless the government acts swiftly to correct the anomaly.”

Dr Kailash Chand, former Vice President of the Brkitish Medical Association (BMA) said: “None of the key issues were addressed in the report! The discrimination is part of NHS culture against BAME staff from the very beginning of their careers. It seems BAME workers are good enough to die, but not good enough to lead.”

Earlier, BAPIO welcomed the government move when it announced that a review of Black, Asian and minorities (BAME) deaths from COVID-19 will be carried out by Public Health England. The review committee set out six objectives, amongst which the final aim was to ‘suggest recommendations for further action that should be taken to reduce disparities’.

The report findings were revealed on 2 June, amid some concerns that the entire report was going to be delayed or shelved.

Since its inception in 1996, British Association of Physicians of Indian Origin (BAPIO) has actively promoted the principles of diversity and equality. Over the years the Association has grown in stature and influence. It is represented through active Divisions covering all the English Regions as well as Scotland, Wales and Northern Ireland. It is now one of the largest organisations of its type in the country.

BAPIO is always committed to ensuring that the NHS provides the best patient outcomes. By promoting professional excellence and leadership, BAPIO adds value in enhancing the skills of the medical workforce. BAPIO also contributes to the cause of promoting access to better health care globally and responds to aid victims of natural disasters in the world. 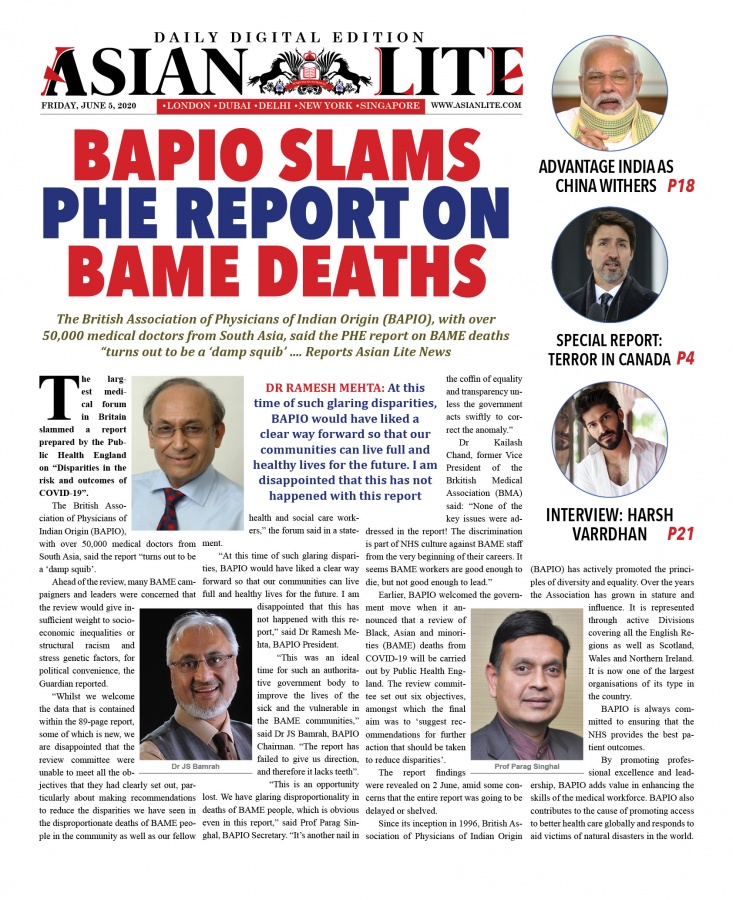