The virus brought China to a standstill at a time when Lunar New Year (Jan26) and spring festival celebrations were being held all around China. Beijing’s ambitious strategy of economic dominance, her global economic outreach in terms of flow of men and material to and from China have made the recovery a Herculean task for China. The severity of Corona Virus pandemic is increasing day by day.…writes Dr Ram Kumar Prasad

The Chinese are on firefighting mode now. Despite its efforts, the epidemic of Novel Corona Virus (2019-n CoV) has spread to all parts of China and the world over resulting in more than 1,200 deaths in China. The largely affected cities and provinces include the epicentre of Wuhan, Hubei province, Zhejiang, Guangdong, Hunan, Henan, Anhui, Shandong, Jiangxi, Sichuan and Jiangsu provinces, Beijing and Chongqing municipalities and Hong Kong.

President Xi Jingping and Premier Li Keqiang are holding multiple meetings on the epidemic. The Communist Party leaders and government officials have been directed to face the crisis at the frontline to ensure social stability. The People Liberation Army and medical experts have been sent to various provinces and cities including Wuhan to prevent and control the epidemic. The restrictions on the flow of people across cities, rural areas and regions, strengthening surveillance to quarantine suspects, isolate patients confirmed, restricting gatherings and extension of New Year holidays have created panic among the Chinese.

The  situation has also escalated into state of confusion, fear and  panic both among the Chinese and expatriates. The common people have been suffering from shortage of medical supplies immediately after the spread and now even in getting groceries in the market increasing the anxiety of common man. The directions to close public spaces and restrictions on the movement of people imposed in communism style have aggravated the panic.  The seriousness of virus epidemic is clear from the direction of Chinese authorities requiring foreign institutions including international schools to provide detailed health data of employees, students and faculty members in the attempt to control the spread of virus.

The masks, protective clothing, goggles and disinfectants are either not available or in short supply prompting the authorities to ration these items which in turn has led to uncertainty. Unable to control the epidemic, Chinese authorities have started a massive exercise of locking down cities, one after another to watch each household, business enterprise, public place and movement on the roads. In its usual stringent way, authority is warning public for violation of rules. There are reports of summary punishment given for any type of violation. People resident of Hubei Province especially Wuhan and Wenzhou of Zhejiang Province are forbidden to enter any complex virtually making them pariahs in China. The virus brought China to a standstill at a time when Lunar New Year (Jan26) and spring festival celebrations were being held all around China. Some institutions have asked the students and faculty members to return to their own countries, but many countries like Pakistan are unable to take them back leading to frustration among the overseas students in China. In this background, there are serious questions on the ability of China to invite foreign students in future offering educational avenues. The spread of Virus is not limited to China but spreading throughout the  South East Asian countries especially Japan, South Korea, Taiwan, Thailand, Vietnam, Malaysia, Singapore, Cambodia and Indonesia affected the most. The US, France, Australia, Finland, Nepal, Germany and Saudi Arabia have also reported the cases of Corona Virus.

Some countries including Philippines, Singapore, Indonesia and Malaysia are denying or restricting the entry of Chinese citizens fearing the spread of virus. Many restaurants have already denied entry to Chinese nationals in these countries as precautionary step. Most of the provinces in China have extended spring  holidays for students and directed business enterprises to remain closed. 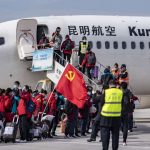 The students and employees have been advised to study and work from home indicating that it is going to be a long haul before returning to the normalcy. According to Chinese media, more than 200 million people have started working from home. In the case of factory workers they have been asked to suspend the production till the epidemic is over. These measures have been taken only to assess the the actual state of epidemic which will enable the authorities to effectively deal with the major crisis.

The international events scheduled including by all weather friend Pakistan, have been cancelled or rescheduled. Some of the social media commented that patients are scared to speak the truth and the government is also hiding the actual ground reality, the criticism often raised against the Chinese Communist Party. The magnitude of virus spread and belated acknowledgement of epidemic has further affected the credibility of Communist regime in handling the major health crisis. The recovery effort by the authorities will be impacted adversely due to lack of transparency in the system. The social media is filled with anti-China comments in handling the crisis.

China’s ambitious strategy of economic dominance, her global economic outreach in terms of flow of men and material to and from China have made the recovery a Herculean task for China. The severity of Corona Virus pandemic is increasing day by day. Apart from national embarrassment, the virus spread is resulting in serious economic loss particularly when China plans to celebrate first centenarian goal of building a moderately prosperous society by 2020.  In the words of Chinese Premier Li Keqiang, maintaining social stability in the current crisis is the need of hour in the country. It remains to be seen how China will emerge from this huge crisis unscathed. The countries throughout the world may take this opportunity to learn to live without imports from China at least for some time!