Outside China, the countries that reported over 10,000 cases included Italy, the US, Spain, Germany, Iran, France and Switzerland…reports Asian Lite News

The number of COVID-19 cases worldwide topped 500,000 as of Thursday noon, according to the Center for Systems Science and Engineering (CSSE) at Johns Hopkins University in the US. The fresh figure reached 510,108 cases with 22,993 deaths.

Outside China, the countries that reported over 10,000 cases included Italy, the US, Spain, Germany, Iran, France and Switzerland. Italy suffered the most deaths from the disease, which stood at 8,165, according to the CSSE, Xinhua reported.

The coronavirus pandemic has claimed 8,165 lives in locked-down Italy by Thursday, with the cumulative number of cases reaching 80,539, according to new data released by the Civil Protection Department.

Speaking during a nightly televised press conference, Agostino Miozzo, director of Civil Protection Department and coordinator of the Technical and Scientific Committee, confirmed that there are 4,492 new coronavirus infections compared to Wednesday, bringing the nationwide active infections to 62,013 cases, Xinhua reported.

Of those infected, 33,648 are under house isolation and 3,612 are hospitalized in intensive care, while 24,753 are in ordinary hospital wards.

He added that there were 999 new recoveries compared to Wednesday, bringing the total to 10,361.

The death toll between Wednesday and Thursday was 662, bringing the total to 8,165 since the pandemic first broke out in northern Italy on February 21.

The numbers are up from an official tally on Wednesday evening of 57,521 actively infected, 7,503 deaths, and 9,362 recoveries.

The British government announced on Thursday that the number of confirmed COVID-19 cases in the country has risen to 11,658 and the death toll jumped by over 100 in a day for the first time since the outbreak of the disease.

A total of 115 people had died of COVID-19 in 24 hours, bringing the toll to 578, the government said. The number of confirmed cases registered an increase of 2,129 on Thursday, from 9,529 on Wednesday, Xinhua reported.

Iran has reported 2,389 more cases of COVID-19 infection, as the total number reached 29,406. The country reported 157 new deaths from the novel coronavirus, raising its death toll from the virus to 2,234. So far a total of 10,457 patients have recovered since the first cases were detected on February 19.

On Thursday, Iran announced the implementation of a social distancing plan for one week starting Friday. The plan includes further restrictions of the inter-city travels, the closure of public places like parks, swimming pools and entertaining centres, a ban on gatherings, and reducing work hours of civil servants. Xinhua reported.

The Central Bank of Iran has approved loans worth $5 billion to be provided to the businesses hit by the COVID-19 pandemic, the Press TV reported.

Turkey on Thursday reported 16 new deaths from COVID-19, as the death toll reached 75. Meanwhile, 1,196 new cases were confirmed, bringing the total number of infections to 3,629. This has made Turkey the second hardest-hit country in the Middle East.

In Israel, a total of 324 people tested positive for the COVID-19, bringing the total number of confirmed cases to 2,693, of whom eight have died and 70 have recovered.

Israel halted on Thursday all train services, while keeping bus lines on a limited scale for transporting essential workers. Taxis are allowed to take only one passenger per ride.

Israel’s leading airline El Al announced a halt of all flights from Friday until April 4, due to a sharp drop in demand for regular flights, concern for passenger health and air crews, and the necessity to reduce expenses.

Morocco confirmed 50 new COVID-19 cases, bringing the total number to 275. So far, 10 of the infected have died and eight have recovered.

Jordan reported 40 new COVID-19 cases on Thursday, which has been the biggest single-day hike so far, raising the total number of infections to 212.

Iraq confirmed 36 new cases, bringing the total number of the infected to 382. Seven more of the infected died, raising the death toll to 36. A total of 105 patients have recovered.

Lebanon reported 35 new COVID-19 cases, as the total number of infections soared to 368, of whom six have died. The government decided to extend the nationwide lockdown for two additional weeks until April 12 in a bid to contain the spread of the virus.

Kuwait reported 13 new COVID-19 cases, bringing the total number of confirmed cases in the country to 208. A total of 49 patients have recovered and 159 are receiving treatment including seven still under intensive care.

Palestine announced 15 new COVID-19 cases, raising the total number to 86, including 77 in the West Bank and nine in the Gaza Strip. All the new cases came from the village of Beddo to the northwest of Jerusalem.

In Oman, 10 new cases of coronavirus infection were detected, bringing the total number of confirmed cases to 109. So far, 23 patients have recovered.

In his opening remarks, the king said that the G20 countries should be responsible for financing researches on therapeutics and vaccine against the coronavirus, which has severely impacted the global economy and markets.

He also emphasized the responsibility of the G20 to extend helping hand to developing countries and the least developed countries, to enable them to build their capacities and improve their infrastructure to overcome this crisis. 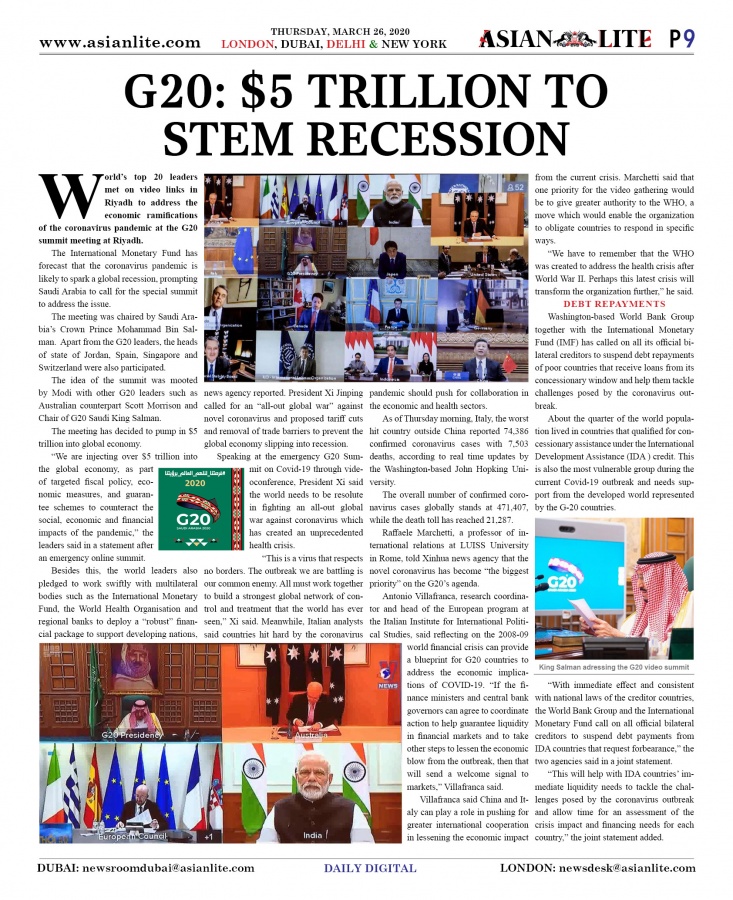 Noting that the pandemic has demonstrated the importance of cooperation and reconciliation spirit within the G20, he said no country has the luxury of implementing protectionist and unilateral policies.

In a statement issued after the summit, the G20 announced the injection of over $5 trillion into the global economy to cushion the impact of the novel coronavirus.

“The steps to support our economies also include protecting workers, businesses, especially micro-, small and medium-sized enterprises, and the sectors mostly affected,” it said.

The move came as part of the efforts to counter the social, economic and financial impact of the pandemic, it added.