The extradition trial of the Indian fugitive diamantaire Nirav Modi in a case of financial fraud and money laundering worth $2 billion, has been adjourned by the court in the UK till September 7.

District Judge Samuel Goozee, who presided over the trial at Westminster Magistrates’ Court on Thursday, said at the end of a four-day partial hearing of the case that the trial will be resumed, hopefully, after the restrictions imposed on the movement of people due to the coronavirus pandemic would have been eased.

The diamond merchant, who was arrested by Scotland Yard in the UK in March 2019 on an extradition warrant by India over charges of fraud and money laundering, had been attending the court using a videolink from his prison in Wandsworth, London. He is to appear at the court on June 11 again via videolink for his 28-day call-over remand hearing, sources said. 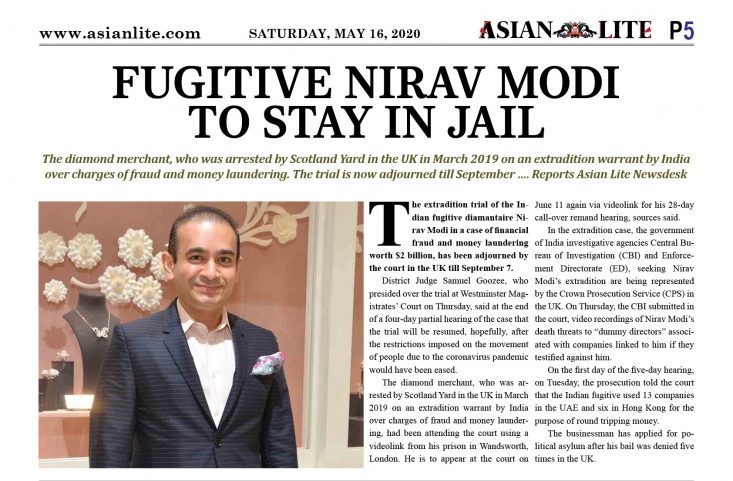 In the extradition case, the government of India investigative agencies Central Bureau of Investigation (CBI) and Enforcement Directorate (ED), seeking Nirav Modi’s extradition are being represented by the Crown Prosecution Service (CPS) in the UK.

On Thursday, the CBI submitted in the court, video recordings of Nirav Modi’s death threats to “dummy directors” associated with companies linked to him if they testified against him. On the first day of the five-day hearing, on Tuesday, the prosecution told the court that the Indian fugitive used 13 companies in the UAE and six in Hong Kong for the purpose of round tripping money.

The businessman has applied for political asylum after his bail was denied five times in the UK.