Home Secretary Priti Patel will struggle to survive at Home Office, the grave yard of many bright British politicians, over her rift with the civil service… writes Kaliph Anaz

Home Secretary Priti Patel was facing pressure to respond to bullying allegations made by Philip Rutnam, the Home Office’s most senior official who resigned citing a “vicious and orchestrated” campaign against him, a media report said on Sunday.

The Guardian said the future of Priti is in doubt over the bullying allegations. The Whitehall establishment is now against Priti for pushing one of the most affable civil servant from the post.

Doubts over the home secretary’s ability to survive come less than three weeks after Sajid Javid’s resignation as chancellor, when he refused to bow to demands from Boris Johnson and the PM’s most senior aide, Dominic Cummings, to sack all his advisers, the Guardian reported.

Lord Kerslake, who was head of the civil service from the end of 2011 until September 2014, told The Guardian that he knew Rutnam well and had been involved in appointing him to his first post as permanent secretary at the Department for Transport in 2012.

“For him to do this means he must have been driven to the limit and beyond,” Kerslake told the paper. “To resign is serious enough, but then to take legal action is quite extraordinary. I think it will send bad signals through the civil service. It speaks of some very toxic relationships at the heart of government.”

Priti was forced to quit the Cabinet by then prime minister Theresa May in 2017 when she was failed to declare unofficial meetings with Israeli ministers, business executives and a senior lobbyist.

While announcing his resignation on Saturday, Rutnam said that he received allegations that Patel’s conduct towards employees included “swearing, belittling people, making unreasonable and repeated demands”, the BBC reported.

Rutnam said that he now intended to take legal action against the Home Office on the basis of constructive dismissal.

Patel, who was yet to publicly respond to Rutnam’s claims, has previously rejected newspaper reports that she mistreated staff. 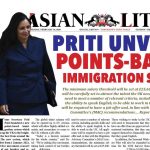 Responding to the development, opposition Labour’s Keir Starmer, a front-runner in the party’s leadership race, said on Sunday: “The Home Secretary has a duty to come to Parliament on Monday to explain the allegations made about her own conduct.”

He also called for the head of the civil service, Cabinet Secretary Mark Sedwill, to start “an immediate investigation” into the circumstances surrounding Rutnam’s departure.

Former head of the civil service, Bob Kerslake, suggested that the home secretary would have to resign if Sir Philip wins his legal action.

According to the BBC, allies of Patel were privately suggesting that Rutnam was not up to the demands of the job.

Shona Dunn, who had been Rutnam’s deputy, will become Acting Permanent Secretary.