Newly elected Labour Leader Sir Keir Starmer praised the contribution of the Indian community to the socio-cultural and business sectors of the United Kingdom. He promised to build new bridges and a strong relationship India.

“A Labour Government under my leadership will be determined to build even stronger business links with India and to co-operate on the global stage on issues such as climate change,” said Sir Keir.

The Labour leader said he is looking forward to meet the Indian High Commissioner.

“I look forward to meeting the Indian High Commissioner in due course to open a renewed dialogue between the Labour Party and the people of India,” said Sir Keir in a statement.

Sir Keir held a meeting with the Executive Team of Labour Friends of India (LFIN). They discussed various issues affecting the communities including rebuilding trust with the British Indian community and promoting UK-India ties.

Sir Keir also pledged to work closely with LFIN to encourage more people from an Indian background to stand for elected positions both in Westminster and local government.

“Britons of Indian origin contribute so much to the UK and to the Labour Party,” said Sir Keir. “I’m committed to working closely with Labour Friends of India to rebuild trust with the community. We must not allow issues of the sub-continent to divide communities here. Any constitutional issues in India are a matter for the Indian Parliament and Kashmir is a bilateral issue for India and Pakistan to resolve peacefully. Labour is an internationalist Party and stands for the defence of human rights everywhere.”

“I congratulate Keir Starmer on his election as Leader,” said Rajesh Agrawal, Co-Chair of Labour Friends of India & Deputy Mayor of London for business. “I really welcome his commitment to rebuilding strong links between the Labour Party and the Indian community. This has been a great start and Keir has achieved a lot in the short span of couple of weeks. Labour Friends of India will work closely with him and will continue to promote UK-India ties as well as continuing to raise any issues from the community to the leadership.” 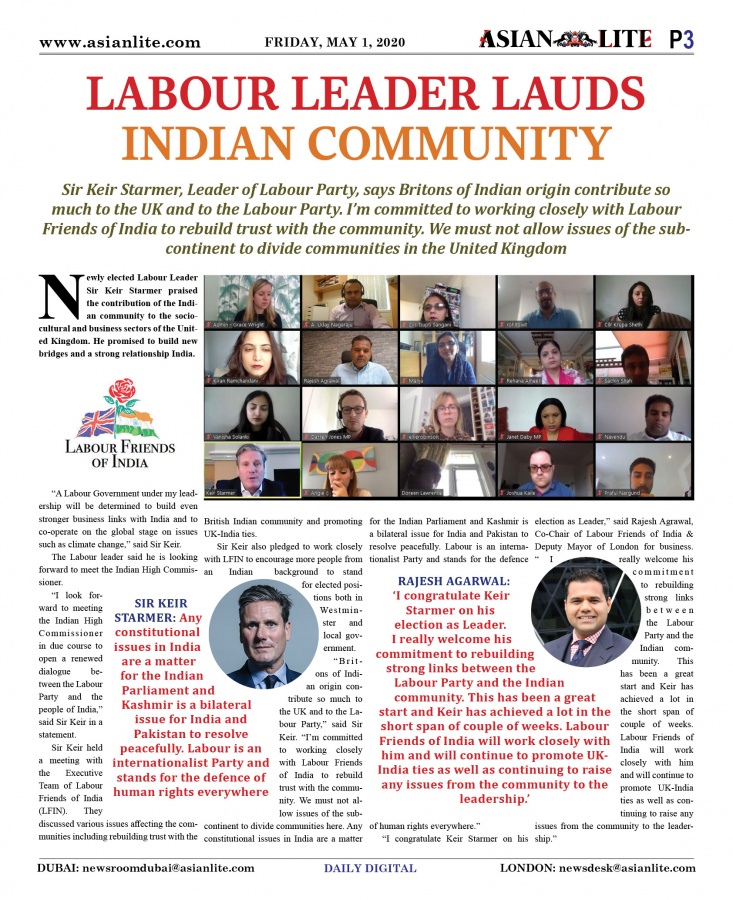