The Mayor last week announced a £300,000 grant to the Auschwitz-Birkenau Foundation in Poland. The Mayor’s contribution came ahead of his visit to Poland later this month to commemorate the 75th Anniversary of the liberation of the camp…reports Asian Lite News 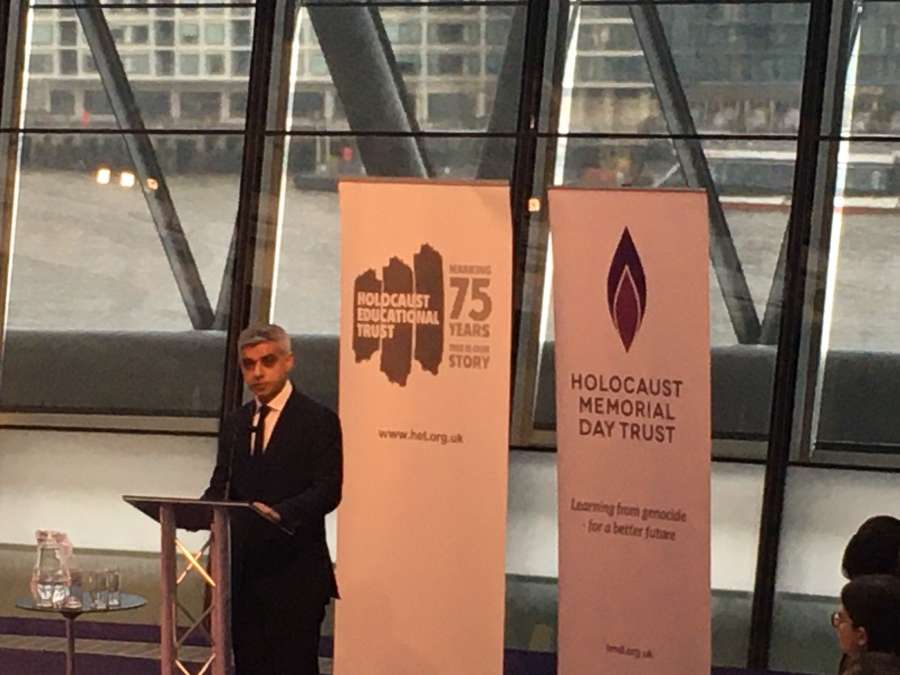 The Mayor of London, Sadiq Khan and Chair of the London Assembly, Jennette Arnold OBE AM joined Jewish community leaders, Holocaust survivors and survivors of the Bosnian genocide for a service at City Hall today, ahead of Holocaust Memorial Day.

It reflected this year’s Holocaust Memorial Day theme, ‘Stand Together’, and guests were invited to reflect on the damage caused by the divisive tactics of genocidal regimes throughout history. They were further challenged to consider how these tactics might be overcome; whether by speaking out against oppression or by individuals and neighbours standing in solidarity with marginalised communities.

The event was led by Chair of the London Assembly, Jennette Arnold OBE, AM with Rabbi Marcus MBE, Emeritus Rabbi of Central Synagogue providing the main address. The Mayor read a poem entitled ‘Toys’ by Abraham Sutzkever while musical contributions were from string duo Fran and Flora. The ceremony also featured testimonies from London schoolchildren who read the Holocaust Memorial Day Statement of Commitment.

The Mayor last week announced a £300,000 grant to the Auschwitz-Birkenau Foundation in Poland to ensure that the horrors of the Holocaust are never forgotten. “The funds will help preserve the ruins of gas chambers and crematoria so that future generations of Londoners and visitors from around the world can learn for themselves the truth about what took place,” the Mayor’s office said in a statement.

The Mayor’s contribution came ahead of his visit to Poland later this month to commemorate the 75th Anniversary of the liberation of the camp.

The Mayor of London, Sadiq Khan, said: “London’s diversity is its greatest strength, but with a worrying rise in anti-Semitism at home and abroad, this year’s theme, ‘Standing Together’ could not be more apt.

“Progress in opposing hatred and promoting equality must never be taken for granted. That’s why it’s ever more important that we hear survivors’ stories and remember the horrors of the death camps and the millions who died.

“As we mark 75 years since the liberation of Auschwitz-Birkenau, I encourage Londoners of all backgrounds to stand in solidarity with the Jewish community, remembering the six million Jewish lives that were lost during the Holocaust as well as victims and survivors of genocides across the world. Only by standing together can we ensure it never happens again.”

Jennette Arnold OBE AM, Chair of the London Assembly said: “This year’s Holocaust Memorial Day theme is ‘Stand Together’. Division and hate divide people and the painful truth is that there is increasing division in our society. It is by standing together we challenge racism and oppression and face down the haters. Now, more than ever, we must unite to challenge division and hostility in our communities.”

Olivia Marks-Woldman, Chief Executive, the Holocaust Memorial Day Trust said: “As people come together across the UK to mark Holocaust Memorial Day 2020, and the 75th anniversary of the liberation of Auschwitz, I am pleased to see the Mayor of London and the London Assembly making a strong commitment to remembering the six million Jews murdered during the Holocaust, alongside the millions of others killed under Nazi Persecution and in the genocides which followed in Cambodia, Rwanda, Bosnia and Darfur.

“The event at City Hall will be one of more than 10,000 taking place in diverse settings across the country – where people will explore the theme of Stand Together.

“At the Holocaust Memorial Day Trust we are pleased to see people learning lessons from genocide, for a better future – particularly at a time when rising antisemitism, anti-Muslim hate and other forms of identity-based prejudice are causing real damage across society.”

“This year we mark 75 years since the end of the Holocaust and the liberation of the concentration and death camps.

As we come together today at City Hall, we remember the six million Jewish men, women and children brutally murdered by the Nazis.

We also pay tribute to those who survived, who even after enduring such horrors, still dedicate their time to share their testimony ensure future generations become witnesses to Europe’s dark history.

As the Holocaust moves further into history, now more than ever, it falls on all of us to carry their legacy”