Prince Andrew has “sought to falsely portray himself” as eager to co-operate with an inquiry into late American financier and sex offender Jeffrey Epstein, the US prosecutor in charge of the investigation has said.

On Monday, Geoffrey Berman, the US attorney for the Southern District of New York, said the Duke of York “has repeatedly declined our request” to schedule an interview, reports the BBC.

But Prince Andrew’s lawyers responded for the first time and hit back at the claims as “inaccurate”.

Berman then issued a statement, deepening the row, saying: “Today, Prince Andrew yet again sought to falsely portray himself to the public as eager and willing to co-operate with an ongoing federal criminal investigation into sex trafficking and related offences committed by Jeffrey Epstein and his associates.”

He said the Duke “has not given an interview to federal authorities, has repeatedly declined our request to schedule such an interview, and nearly four months ago informed us unequivocally – through the very same counsel who issued today’s release – that he would not come in for such an interview”.

“If Prince Andrew is, in fact, serious about co-operating with the ongoing federal investigation, our doors remain open, and we await word of when we should expect him,” theBBC quoted Berman as saying in the statement.

But a source was quoted by the BBC as saying: “This is the third time Berman has breached his own confidentiality rules, further diminishing our trust in the DoJ’s (Department of Justice) willingness to play a straight bat. It’s frankly bewildering.”

The DoJ has made a formal request to speak to the prince as part of its Epstein inquiry, by submitting a mutual legal assistance (MLA) request to the UK Home Office.

Under the terms of a MLA request if Prince Andrew does not voluntarily respond, he can be called to a UK court to answer questions, said the BBC report.

The UK royal was removed from public duties last November following allegations he had slept with a teenager who was trafficked by Epstein, who was found dead in his New York jail cell while awaiting trial last August. 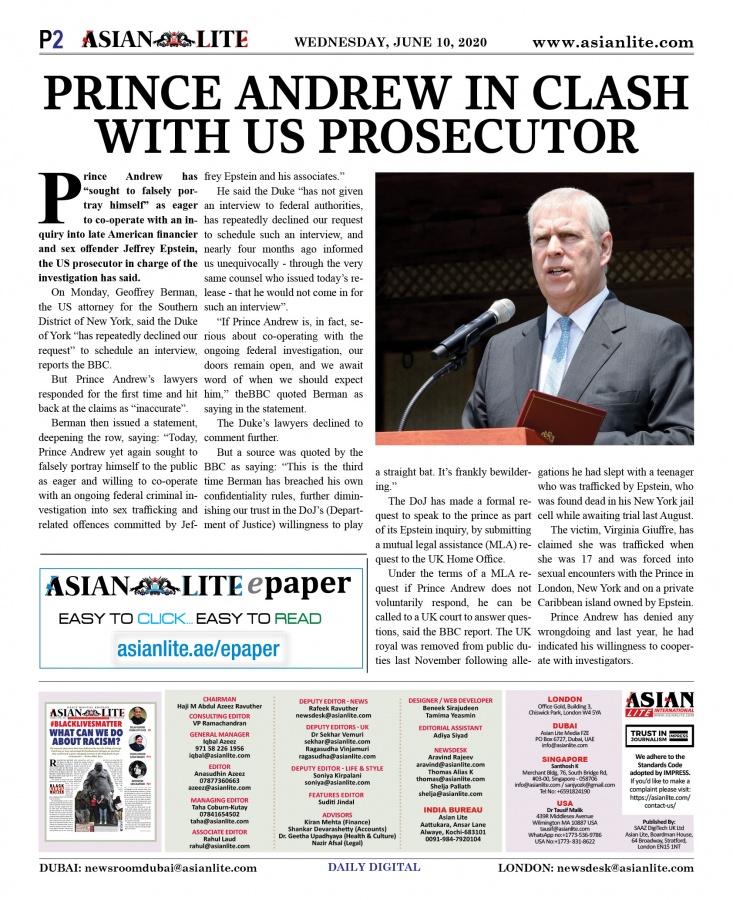 The victim, Virginia Giuffre, has claimed she was trafficked when she was 17 and was forced into sexual encounters with the Prince in London, New York and on a private Caribbean island owned by Epstein.

Prince Andrew has denied any wrongdoing and last year, he had indicated his willingness to cooperate with investigators.