Dr Shabir Choudhry, one of the prominent voices from the British-Asian community, wrote a letter to newly elected Labour leader Sir Keir Starmer saying that Pakistan continues to disobey UNSC resolutions on Kashmir.

“In view of this bitter fact, how relevant are the UN Resolutions, especially when both India and Pakistan have agreed in the Simla Agreement of 1972,” Dr Choudhry said in the letter.

Dr Chaudhry, who is also the President, Foreign Affairs Committee of United Kashmir People’s National Party (UKPNP), said in his letter: “Pakistan to date has not withdrawn their troops from the territories that do not belong to Pakistan, but continues to send ‘Jihadi warriors’ to commit acts of violence and terrorism on the other side of the divide.”

Recently, Sir Keir in his letter to the Muslim Council of Britain stated, “Our position on Kashmir has not changed, we support and recognise previous UN resolutions on the right of Kashmir people but maintain that if we are to find a lasting settlement to end this conflict, that can only be achieved if India and Pakistan working together, with the people of Kashmir.”

Reacting to the statement by Sir Keir, the PoK activist reminded him about the UN Security Resolution of August 13, 1948.

Dr Chaudhry said Pakistan continues to occupy a large part of the princely state of Jammu and Kashmir.

“In view of this bitter fact, how relevant are the UN Resolutions, especially when both India and Pakistan have agreed in the Simla Agreement of 1972, that they will resolve the dispute bilaterally,” he wrote in the letter.

“Also, I hope that the Labour Party, under your leadership, will ensure that Members of Parliament do not succumb to pressure of those who promote extremism, intolerance and religious hatred; and will discharge their duties impartially by taking views of all communities into consideration,” he added. 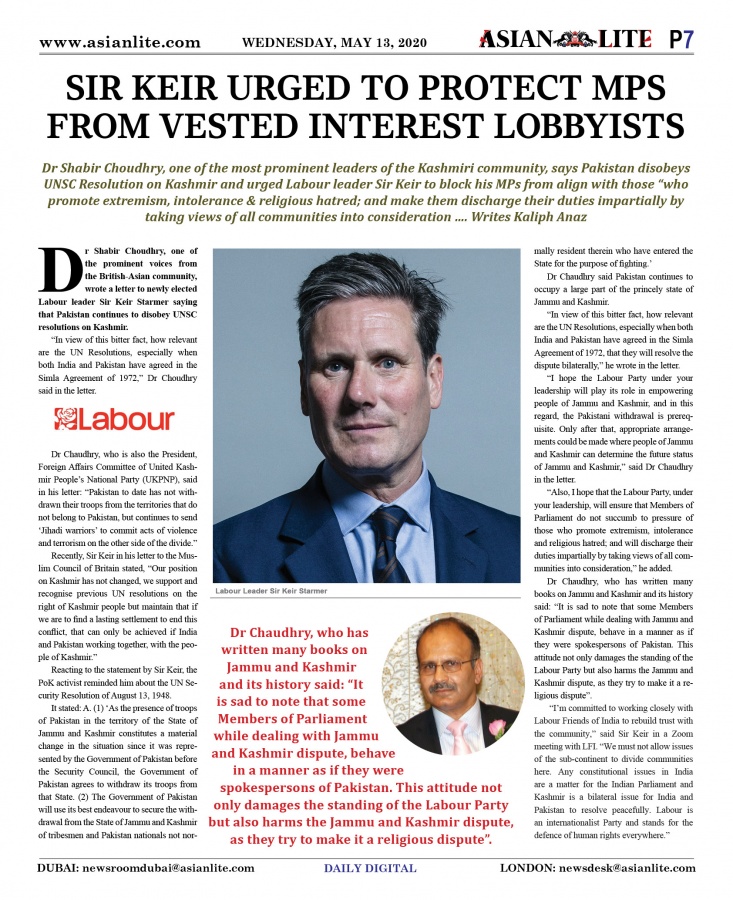 “I’m committed to working closely with Labour Friends of India to rebuild trust with the community,” said Sir Keir in a Zoom meeting with LFI. “We must not allow issues of the sub-continent to divide communities here. Any constitutional issues in India are a matter for the Indian Parliament and Kashmir is a bilateral issue for India and Pakistan to resolve peacefully. Labour is an internationalist Party and stands for the defence of human rights everywhere.”