The suicide bombers targeted a ‘dharamshala’ in Shor Bazar area of Kabul, which has a sizeable population of the Hindu and Sikh minorities…. reports Asian Lite News

The attack on a prominent Sikh place of worship in Kabul shocked the whole world which is reeling under the scare of Corona epidemic. The Guruwara was targeted by suspected suicide bombers belongs to Tehrik-i-Taliban on Wednesday morning causing the death of 11 worshippers.

The suicide bombers targeted a ‘dharamshala’ in Shor Bazar area of Kabul, which has a sizeable population of the Hindu and Sikh minorities. Some reports said the attack began at about 7.45 am Afghan time. Suicide bombers had entered the dharamshala in Shor Bazar and were fighting with security forces, interior ministry spokesman Tariq Arian was quoted as saying by leading Afghan news channel Tolo News.

The Afghan security forces had cleared the first floor of the Sikh place of worship and rescued a “number of people” who had been trapped inside the building, Arian said. Efforts were on to rescue other survivors, he added. 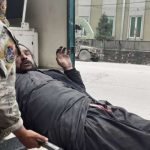 The attack contains hallmarks of Pak-based terror outfits. Intelligence agencies says that Lashkar e Tayibba and Haqqani Network are responsible for the attack on Sikhs.

“Today’s terrorist attack on Sikh minority proved that Taliban is not committed to the peace process in Afghanistan,” a Sikh businessman in Kabul told Asian Lite. “The criminal entity is a threat to the stability in the region.

“When all countries are united in their fight against a common threat like Corona epidemic, Taliban is plotting to attack a religious place and killing people on prayers,” said Asim Khan, “All that they can think of is hitting out at the peace-loving Sikh community in Kabul with the support of Pakistani intelligence. What a shame.”

“Pakistan is supporting Taliban to attack Sikhs on prayer at Gurudwara because they want to divert media attention from the Corona shambles in the country,” said Gurjeet Singh. “At one hand they are opening Kartarpur Gurudwara to showcase the religious harmony image to the whole world, on the other hand they are supporting terror on Sikhs to teach India a lesson. Taliban and its political masters in Pakistan must be brought to justice at international court in Geneva for crimes against humanity.”

Narender Singh Khalsa, a resident, said that he was near the Gurudwara when the attack happened and ran to the site.